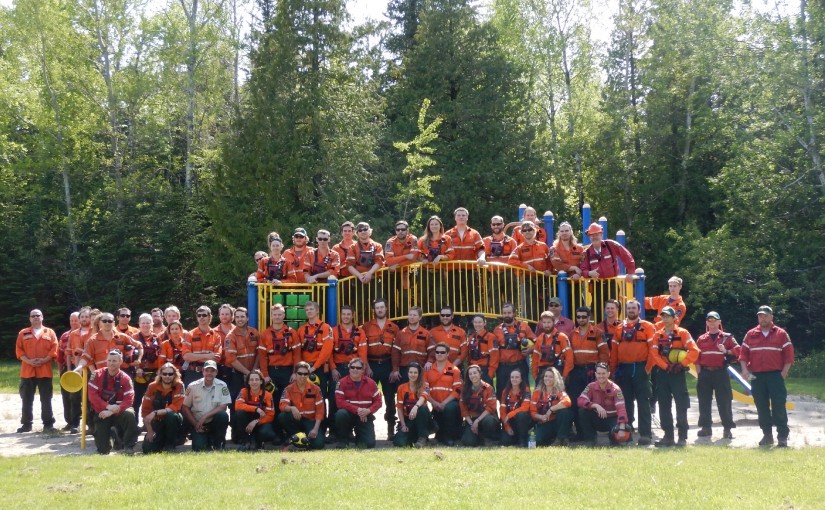 Ever wondered how wildfires are handled in parks? Assistant Superintendent Anne Young recounts a recent training exercise completed in her park.

The MNRF Fire Base in Dryden has contacted Aaron Provincial Park to advise that there is a wildfire east of the park. The fire has an east wind; they are predicting it may impact the park by early evening.

The simulation has begun…

By 11:30 am, the Fire Base confirms the wildfire is approaching the park. They anticipate the wildfire will reach the park by 4:30 pm.

The park is approximately ¼ occupied, and there is a large school group on a field trip at the west beach. The Dryden Fire Management Headquarters is monitoring the threat, and deploys its fire crews to the park. MNRF Fire sets up an Incident Command Centre in the park and the fire crews arrive. The Incident Commander (IC) meets with the Assistant Park Superintendent to review safety and protection priorities. The IC then divides the park into three sectors and assigns priority structures that should be protected. Crews head to their sectors, carrying all their equipment to set up water pumps and lay 100s of metres of fire hose in order to set sprinklers in the fixed holders located on the buildings.

With the assistance of park staff, the IC constantly reassigns competing priorities. Park visitors are packing quickly and are being directed to exit the park. Park staff continue to work with outside agencies to evacuate visitors safely.

At approximately 1:45 pm, a quick aerial flight to reassess the approaching fire determines that the wildfire is moving forward much quicker than initially anticipated. This is likely due to high winds, as well as recent storms creating “blow down,” which now fuels the fire. It is now estimated that the wildfire will reach the park by 3:00 pm.

All visitors still in the park are instructed to leave their belongings and exit the park. The IC communicates with all crews. All pumps are functioning, hoses laid and sprinkler heads have been set. Everyone’s safe, and park staff can leave the wildfire — and their park — in the hands of MNRF fire crews.

Aaron Provincial Park is the first park in Northwestern Ontario to participate in a Fire Smart initiative where the buildings have been equipped with permanent sprinkler holders affixed to the buildings. By having the holders already in place, MNRF fire crews can quickly place the sprinklers during a wildfire. “Fire Smarting” around the structures will not only possibly save the structures, but it will also greatly reduce the intensity of the fire around the buildings themselves providing additional support to extinguish the fire.

Aaron Provincial Park was selected as a pilot site for the program due to its close proximity to the Dryden Fire Management Headquarters. The park will continue to be used as a training base for ground fire crews.