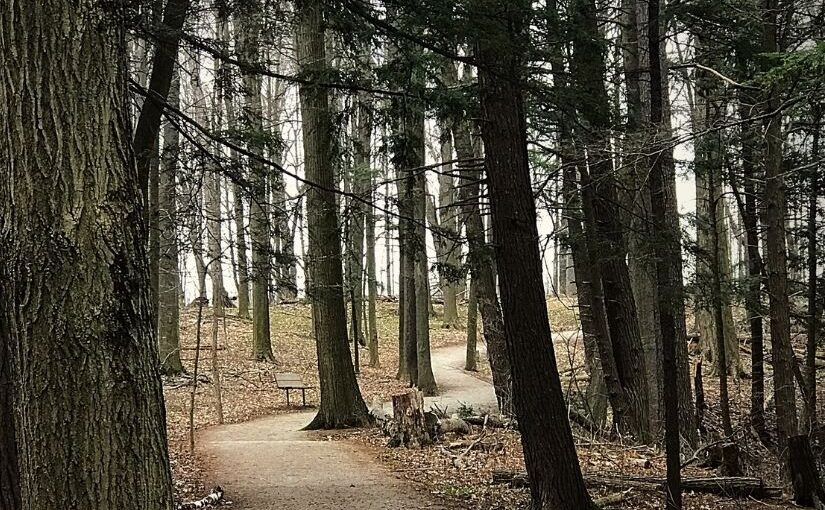 Have you ever wandered down a sunny forest trail and found yourself in a shaded grove; one of those special places where the noise of the world becomes hushed?

You’ve stepped into a stand of Eastern Hemlocks.

Our tall, graceful hemlock trees are quite different from the poisonous plant species made famous by Socrates.

Rather than a symbol of death, Eastern Hemlocks better epitomize the resilience of life: while they are slow-growers, Eastern Hemlocks can survive for 200 years in the shade of their shorter-lived tree cousins, waiting a chance in the sun.

If they reach adulthood, Eastern Hemlocks can live over 600 years. There are trees in our parks that still contain carbon in tree rings grown before 1615 — when Samuel de Champlain reached Lake Huron with help from the Wendat and Algonquin peoples.

Slow-growing Eastern Hemlocks have been recovering in our forests for several decades, but sadly, they are again under threat. These trees may not represent death, but they are at risk of it.

The Hemlock Woolly Adelgid is an invasive insect that is killing Eastern Hemlock trees in Nova Scotia and the eastern United States. It has been found in the Niagara region of Ontario.

So far, Ontario outbreaks have been successfully managed, but if untreated, the Hemlock Woolly Adelgid kills most, if not all, of the trees it infests.

Why are Eastern Hemlocks important?

Ample habitat for all

Eastern Hemlock groves are islands of habitat for Blackburnian Warblers and Hermit Thrushes. Hemlock trunks are a favourite sap source for Yellow-bellied Sapsuckers and Ruby-throated Hummingbirds who drop by to feed on the sap from pre-drilled holes.

Dense branches provide shelter for White-tailed Deer, which often choose these areas as bedding sites, and hemlock bark is a porcupine favourite.

The presence of Eastern Hemlocks makes the entire forest stronger and more resilient.

Important to our history

These trees are also culturally important.

The leaves, branches, and bark have long provided medicines for Indigenous peoples.

More recently, huge numbers of Ontario hemlocks were used in the 1950s and ’60s to construct Toronto’s subway tunnels.

Ecologists and foresters are working to limit the spread of this tree killer, but they don’t have a complete map of where Eastern Hemlocks live in Ontario.

You can help by adding Eastern Hemlock sightings to iNaturalist. Look for trees that have:

You can find more photos here, and more information about the Hemlock Woolly Adelgid from the Invasive Species Centre. If you think you’ve found a tree infected with adelgids, report it at EDDMaps, so invasive species experts can take action.

The next time find yourself in a shady Eastern Hemlock stand, thank them for their service to both humans and Ontario’s ecological integrity. Snap a picture for iNaturalist, and help protect our forests for many years into the future.