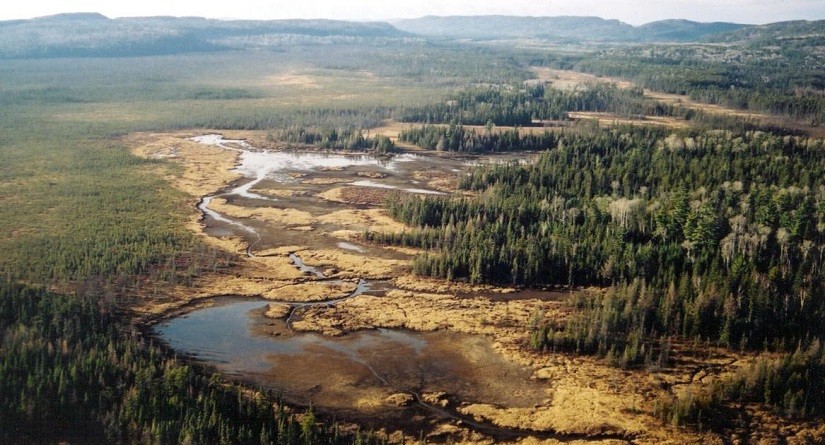 It sounds terrible, doesn’t it? When movie directors want to make things hard for their characters, they sometimes pick a wetland to chuck them into – think Humphrey Bogart in the classic movie “African Queen,” where he struggles day after day to pull his boat through an impenetrable swamp.

Wetlands get a bad rap, but they are hugely important to all of us.

Without them, things would be a lot more difficult on old Planet Earth.  Like big sponges, they store water from snows and rains, and then let it out when things get dry. They provide rich habitats for plants and animals to live in, and they create “biodiversity”: the variety of life.

Ontario is a big place with a huge variety of wetlands in all of that landscape. So, on World Wetlands Day, we want to celebrate with you, and share the wealth of swamps, fens, bogs and marshes we have in our parks!

Located at the mouth of the Mississagi River, Mississagi Delta Provincial Park is an estuarine marsh.

Marshes feature shallow water, and water levels fluctuate seasonally. Marshes are nutrient-rich, and are often a refueling station for migrating birds and a nursery for baby fish. This type of wetland supports great biodiversity.

Fens are an oxygen- and nutrient-rich type of wetland. Water flows in a fen. Because the water levels in fens can rise and fall, a greater of diversity of species is possible. Sedges and shrubs make up most of the plant life.

There are a wide variety of fens, include northern ribbed fens (featured above). The Canadian Wetland Classification System says of ribbed fens:

“These fens have sub-parallel, low peat ridges (strings) which enclose elongated wet hollows or shallow pools. The ridges or hollows are oriented perpendicular to the direction of surface flow. The thickness of peat generally exceeds 2 m, and it is composed of moderately decomposed sedge and moss remains. Trees often grow on the ridges.”

A palsa is a mound of perennially frozen mineral soil and peat, heaved up by the frozen groundwater. Palsas rise at least a metre off the ground, in a convex shape.

Cool fact: palsas can occur in fens, as well as bogs.

One of the dominant lifeforms is the reindeer lichen (which is what gives the white colour to the photo above) growing atop the palsa bogs. In this photo, fens surround the palsas in the lower, wetter sections, showing as green areas between the palsas. Ponds form between the palsas.

Trees are rare in Polar Bear Provincial Park because of the frigid conditions, but some low shrubs can be seen growing among the lichen.

A swamp is a wetland that often contains trees. Swamps have fresh groundwater flowing through them, and the trees that grow there are adapted to wet conditions, but still need lots of nutrients. The swamp in this photo is a conifer swamp, with many boreal species of trees and shrubs.

At Wakami Lake Provincial Park, the swamp encloses parabolic dunes, on which trees and shrubs can grow. While the swamp is a wet environment, the dune forests are fire-driven ecosystems, and need fire (e.g., caused by lightning) to regenerate. At the end of the ice age, water levels receded and the sand was blown around by wind, creating parabolic dunes (the squiggly section near the middle of the picture above).

The larches (a species of conifer that sheds its needles each fall) and dwarf birch trees (pictured below) are typical of the trees that grow here. These trees can survive with water flowing around their roots as long as the water has enough nutrients.

Salt marshes develop along saltwater coasts in areas protected from waves and storms. The marshes are flooded by the ocean tides, but aren’t destroyed by harsh waves. They never completely drain, and contain plants that have adapted to a mix of fresh and salt water.

The salt marshes of Polar Bear Provincial Park provide food and habitat for huge numbers of birds that migrate through or nest in the park.

The photo below shows what a salt marsh looks when a river spreads out across it as it flows to the sea.

Because of its size, the Stag Lake Peatland contains a variety of wetlands, including conifer swamps, fens, bog, and open marshlands. This provincially significant wetland at Misery Bay Provincial Park is the largest wetland on Manitoulin Island.

The Misery Bay wetland includes components of fens, swamps and bogs. It is a crucial habitat for many creatures, including these Sandhill Cranes.

If you’ve visited a provincial park, you’ve experienced the beauty of our province’s wetlands.

We hope you make time to paddle through fens, stroll across marshy boardwalk, and even get up close and personal with some swampy muck this year.