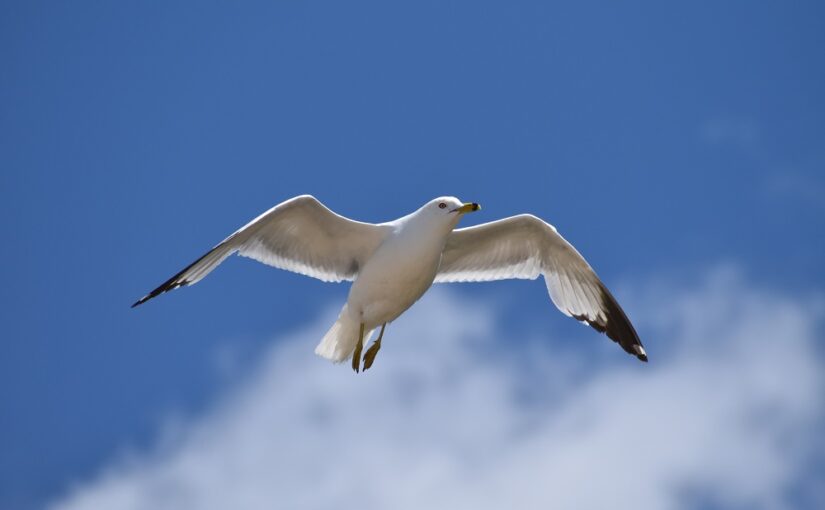 In today’s post, Awenda’s Chief Park Naturalist Tim Tully defends what some may think is the undefendable: the gull.

If there was ever an animal that gets a raw deal, it’s the gull.

It’s time to set the record straight and come to the defense of this unfairly maligned avian “underbird.”

For starters, we can’t even get the name right. I hate to tell you, folks, but there is no such thing as a seagull!

My perennial argument is this: “There is no sea in south-central Ontario, therefore, there can be no seagulls!” They are gulls.

The gull is forced to endure further insult as the bogus common name is used blindly as a blanket term for all gull species, unceremoniously dumped into one generic picnic basket. With a closer look, you can see a spectacular diversity of species in Ontario. Twenty-one of the world’s 54 gull species have been documented in the province.

Ontario’s provincial parks, particularly those located around the Great Lakes, are a natural refuge for these misunderstood shorebirds.

Some gulls have descriptive names that reflect a defining characteristic.

Our most common Ontario species, the Ring-billed Gull, has a prominent black ring encircling its yellow bill.

Other species have colourful historical connections.

Bonaparte’s Gull is named after Napoleon’s cousin, French biologist Charles Lucien Bonaparte, who first collected a specimen in Philadelphia in 1815.

Franklin’s Gull is named after the famed arctic explorer, Captain John Franklin, whose expedition to the Canadian Arctic first collected and identified the species in 1823. Sir John knew gulls were cool — get it?!

Birds of a feather

They are long-winged and web-footed with slightly hooked bills and square or rounded tails. Ontario species range in size from the elfin Little Gull at 11 inches to the relative behemoth, the 30-inch Greater Black-backed Gull.

Admittedly, gulls can be difficult to distinguish from one another with their subtle combination of grey, white, and black plumage. Even the finicky community of birdwatchers rarely give gulls their due.

It takes patience and skill to identify the subtle differences between species and age classes.

Fortunately for most of us, we encounter gulls almost every day. They are opportunistic scavengers. Gulls eat both plant and animal matter, and are known to eat carrion.

They will often bully a smaller shorebird with a brazen act of aerial piracy to steal a free meal. No dump scene or fast-food parking lot is complete without an attending gull. Herein may lie the root of our collective prejudice. We deride gulls as Garbage Birds, Dung-hawks (I’m being polite here), Fry Bandits, or Rats of the Sky.

But here’s the thing: how can we blame gulls when we as humans are the root cause of their superabundance?

Gulls take advantage of any available food source. The mass waste of garbage dumps is a virtual gull smorgasbord. Gulls are one of the few generalist species that have thrived alongside explosive human growth.

Hard to blame gulls for filling the valuable niche of scavenger and cleaning up our mess in the bargain.

In parks, this issue plays out on our beaches and shorelines.

People attract gulls by leaving garbage, or worse, by actively feeding them to entice them closer. The next park visitor inherits a larger problem as gulls return expecting handouts.

In the worst-case scenario, a beach-goer picks up a nearby stone and tosses it to scare off an unsuspecting bird. It is illegal to harass or hurt wildlife in provincial parks. Feeding wildlife, including gulls, for our pleasure and amusement is harassment.

It prevents birds from following their natural patterns while also introducing unhealthy items into their diet.

Gulls have many virtues. They are the undisputed masters of the air. They ride updrafts like no other bird, floating effortlessly by mining the subtle differences in air pressure between the water surface and breaking waves.

Their intricate weaving and undulating is often maneuvered without a single wing-beat. Gulls have even recently been credited with altering their flight path to take advantage of small updrafts rising from rows of low-rise buildings!

So here’s a challenge. The next time you’re cohabiting with gulls on a park beach, sit for a moment and marvel at their intricate and effortless flight pattern.

Maybe it’s time we re-frame the gull’s job description to read honorary Sanitary Engineer and thank the extended gull family for their clean up efforts. A further step would be to do them a return favour and clean-up any loose fishing line or plastic bottle rings which could entangle or injure these vulnerable birds.

Gulls belong in the air where they can be admired, not hobbling on a beach with a broken limb.

Don’t feed wildlife and leave gulls to a raw meal. And please remember, it’s a gull by any other name!