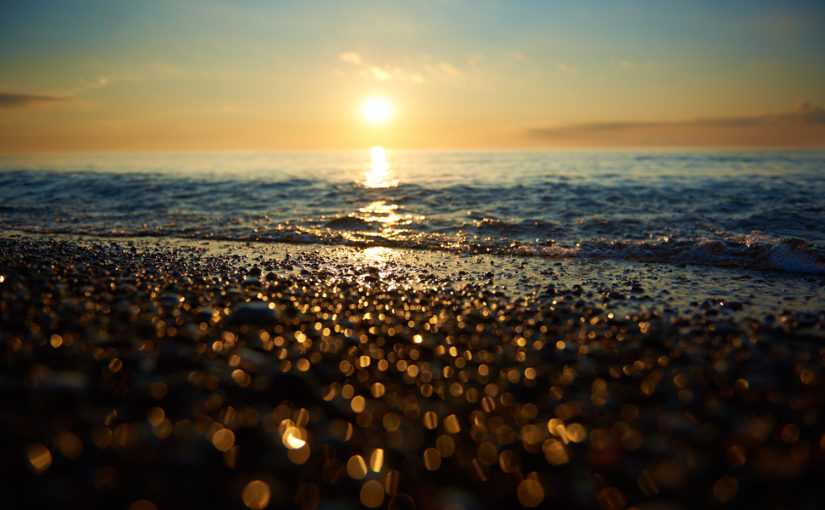 Have you ever come to a beautiful beach and marveled at the spectacular pebbles scattered before you?

They seem to be of every colour, shape, and size imaginable.

And if you look up close with a magnifying loop, you may even see additional details like fossils and crystals!

Those pebbles can tell the trained eye an incredible story of how they formed, what has happened to them since, and how they ended up in front of you. It’s a story that can be billions of years in the making and involve incredible forces of nature. Ontario is one of the richest places in the world to view the Earth’s geological heritage.

Most of us have heard of the Canadian Shield. This is a region of the planet spanning from northern Ontario to Labrador that is made up of ancient rock formations, some over 4 billion years old!

Those formations were created by incredible geological and erosive forces that have occurred over billions of years and that continue to this day.

But before going much further, let’s talk a little bit more about some of the typical rocks you might see in our provincial parks:

There are three basic types of rocks:

Igneous from the Latin word for fire, are formed from a magma, which then cools, crystallizes, and solidifies.

Sedimentary form in a few different ways. The most common mechanism is when another pre-existing rock (either igneous, sedimentary, or metamorphic) is eroded, transported, and then redeposited (e.g., sandstone).

Other ways to form sedimentary rocks include the precipitation of minerals from warm shallow seas (e.g., salt), or the accumulation of dead organisms (e.g., chalk).

Metamorphic rocks form when any type of rock is changed from its original form, typically through heat or high pressures deep within the Earth’s crust.

With a little practice, knowledge, and a magnifying glass (to identify crystals and  grains) you can become quite knowledgeable in identifying the rocks and begin your journey of discovery into our past.

So, let’s try to use our modest understanding of rock formation to tell a story, the story of one of our geological wonders: the formation of Killarney Provincial Park.

A long, long time ago, in a place not too far away

Upon arrival at Killarney’s main campground, you can walk to the lake and immediately see some unique features.

A lake of very clear water surrounded by cliffs of granite and, off in the distance, the white quartzite mountains of the La Cloche Mountain range.

Down by Georgian Bay, you can find smooth and banded gneiss.

Finally, limestone can be found in various regions of the park with its characteristic smooth light tan colour. This spectacular vista provides the context for uncovering the story of how it formed and gives us clues as to what to look for to confirm our ideas.

Why does Killarney have these unique white Quartzite mountains?

To answer this question, we must understand what could have led to the formation of the quartzite.

A very long time ago (about 2.2 billion years to be exact!), an inland sea or shallow ocean existed in this region of the world.

Over millions of years, a great deal of sand would have been deposited along this ancient shoreline.

As more and more sand was deposited, the older and now deeply buried sands slowly turned into the sedimentary rock known as sandstone.

For a long time, sandstone would have been dominant in this region.

Earth’s continents sit upon tectonic plates that are constantly in motion.

Billions of years ago, two plates collided in this area.

Where there was once an ocean separating continents, there was now dry land and the pressure of two land masses pushing upwards against each other.

This pressure created giant mountains, perhaps at one point taller than the Rockies or the Alps of today.

The pressure and heat created during this mountain-building process transformed (or metamorphosed) the sandstone into the super hard metamorphic rock quartzite! That is how the beautiful quartzite mountains of Killarney formed.

Other rocks confirm the presence of the ancient oceans that once covered this area.

Limestone, found in scattered regions in the northern sections of the park, formed from the decay of organic material that once inhabited the oceans.

The beautifully banded gneiss, found southwards towards the Georgian Bay coast, is a metamorphic rock that started off as shale and has undergone several metamorphic transformations during the mountain building period.

Shale is a sedimentary rock composed of silt and clay, typically found along ancient seabeds.

The incredible power of the mountain building also played an important role in exposing Killarney’s other most common and beautiful rock — granite.

Where does all the Granite come from?

Granite is an igneous rock that forms in pockets of magma, tens of kilometres below the Earth’s crust.

As it slowly cools, crystals form and, eventually, become quite pronounced.

All granite contains quartz (a mineral not to be confused with the rock quartzite), which is slightly transparent. The pinkish colour seen in Killarney’s granite, however, is due to another mineral, potassium feldspar. The same mountain building process that occurred from the colliding plates also raised the granite from deep within the Earth’s crust to rise high above the surface.

This is the same process that created Yosemite National Park’s famous Half Dome Mountain. Both the granite and quartzite mountains then were then set upon, not by geological forces deep within, but from above.

The Earth’s climate is constantly in change.

We cannot appreciate it much in our human lifetimes but, on a geologic time scale, glaciations happen in the blink of the eye!

Every now and then, the climate of the Earth gets colder and the glaciers mostly confined to the Arctic migrate southwards, covering much of Canada and the northern half of the United States.

These kilometre-high ice sheets exert tremendous force on the ground, ripping up softer rocks and scouring out long valleys.

Scientists believe that glaciers wore down the ancient mountains, hills, and soils across much of Ontario.

How do we know that glaciers once covered an area? Common telltale clues include boulders that seem very much out of place, called “glacial erratics”, and strange crescent moon-like marks in the rock known as “chatter marks”.

Chatter marks form when rocks trapped at the bottom of glaciers are dragged across a hard rocky surface; these rocks can occasionally “snag” against the rock below and then suddenly lurch forwards.

As they stutter across, they carve out the marks we call “chatter marks”. The cusps of the crescent point in the direction of glacier travel

Putting it all together

From pockets of molten magma found deep within the Earth’s crust, the rock granite was formed.

And the sand, silt, clay and the decay or organic material in ancient oceans formed the sedimentary rocks: sandstone, limestone, and shale. This heat and pressure ultimately created the quartzite from the sandstone and the gneiss from the shale.

The uplift also raised up the quartzite and granite into mountains.

Finally, several periods of glaciation wore down the quartzite and granite mountains and sculpted the surrounding regions, leaving us with the spectacular beauty that we see today.

All of this can be deduced when you’ve has mastered the knowledge of reading the stories in the rocks!

The journey of exploration continues above the Earth

A properly-trained geologist can use the same types of techniques that we used for determining Killarney’s story to unravel the mysteries of other worlds.

On the moon, the Apollo astronauts were able to identify and pick up samples of igneous and metamorphic rocks that scientists back on Earth were able to use to unravel the moon’s history and its connection to the Earth.

Also, because the moon has practically no atmosphere, the rocks found there have experienced very little erosion, allowing scientists to study and examine material that is much older than any seen on the Earth.

Hopefully one day in the future, humans will also set foot on Mars, a planet of fascination, beauty, and the long-promised dream of future space explorers.

Indeed, Mars may hold the answer to one of the biggest unanswered scientific questions of our time: are we alone in the universe?

Whether it be the moon or Mars, we must train our astronaut explorers in the science of geology so that they may uncover the clues that will tell us more about the places they visit.

That’s why Canadian Space Agency (CSA) and NASA astronauts come to Canada — from Sudbury to the high Arctic — to learn from one of the authors (Dr. Osinski), on how to search for, collect, and identify the geology of these regions so that they may embark on a similar exploration on other worlds in the not-too-distant future!

Important learnings from other worlds

Whether it be training astronauts before they launch to the moon, or scientists interpreting the data sent back from Mars collected by robots, the concepts we’ve talked about so far are rooted in our understanding of the geology of the Earth.

But can we turn that on its head and learn about the Earth from those other worlds?

The short answer is yes!

Let’s return first to Mars. Robotic missions to the Red Planet over the past 40 years have returned a wealth of data that indicates that around 4 billion years ago, the planet was much more habitable than it is today.

With rivers, lakes, and possibly even oceans, Mars and Earth probably looked very similar at that time.

Mars today is a barren, frozen planet with only a very thin atmosphere.

The lessons that scientists are learning about how Mars’ climate has changed over the past 4.5 billion years may have lessons for the understanding of how our climate here on Earth may change in the future.

The same can be said for Venus, which has what scientists call a “runaway greenhouse effect.”

Temperatures on the surface of Venus of 475oC are a stark demonstration of what can happen if too many greenhouse gasses, such as carbon dioxide, end up in the atmosphere.

If we return to the Moon, one of the most exciting opportunities that our only natural satellite provides geologists are ancient rocks.

As we learned about earlier when discussing how Killarney came to look the way it does today, Earth is a very active planet.

We have plate tectonics, which constantly creates new crust in some locations and destroys it in others, active volcanoes, and active erosion by wind, rain, snow and ice.

All of these processes are continually wearing down and recycling the geology of our planet. The result is that we have hardly any rocks left from the first 1 billion years of Earth’s history.

This is unfortunate as it is during this time that life originated on Earth and that other major processes such as plate tectonics are thought to have started.

But the moon preserves a record of this first billion years of the history of the solar system. It lies there awaiting discovery by the next generation of explorers.

Witness the Stars over Killarney

This year, Killarney Provincial Park will be celebrating Killarney’s incredible geology at its Stars over Killarney event, ‘from the Earth to the Moon, Mars and Beyond”. Come out and join us to participate in an amazing weekend of presentation and workshops geared to the family that teach us about the Earth’s geology and about the other worlds in our solar system!

[1] Dr. Osinski is a Professor in the Department of Earth Sciences at the University of Western Ontario. He was also the Founding Director of the Institute for Earth and Space Exploration, and is Director of the Canadian Lunar Research Network and Chair of the Planetary Sciences Division of the Geological Association of Canada