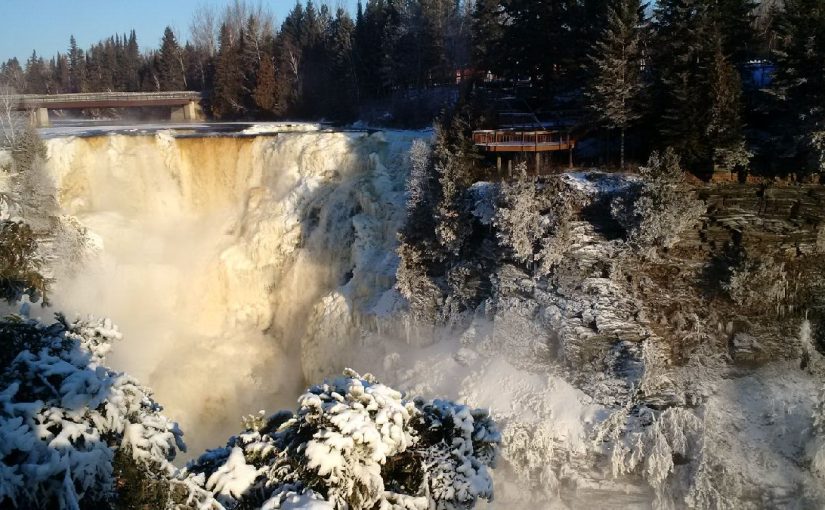 When most of us picture winter ice, we conjure up mental images of skating rinks and icicles. But did you know there’s a lot of variety in wintry water formations?

From frozen falls to ice volcanoes, winter water is quite a sight to behold:

We started with the main attraction. Everyone loves waterfalls, but we don’t always stop to imagine how they change with the seasons.

For example at 40 m high, Kakabeka Falls is the second highest waterfall in Ontario, and it sure looks neat when all that water freezes!

How about some before-and-after? Ragged Falls certainly looks different under a blanket of snow.

And check out the winter transformations of these three Lake Superior Provincial Park‘s waterfalls!

Groundwater seepage occurs year round on the landscape, and, boy, can it be dramatic on winter cliffs!

In ice-free seasons, gravity causes groundwater seepage to flow unobtrusively down the rocks, but in winter, the groundwater freezes as it flows, and builds up into an ice fall that “grows” down the slope.

Melting snow and ice trickles over the side of the rock cut, eventually re-freezing. Just like an icicle, it gets bigger and bigger, eventually becoming enormous.

Shelf ice appears along the shoreline. It’s formed by waves pushing sheet after sheet of ice against the beach.

*Safety Reminder* These ice formations have many hidden thin spots and ice tunnels that funnel people into the water with no escape. Enjoy these formations from solid ground.

You may find interesting ice formations along the shoreline, especially on the Great Lakes. Late fall / early winter storms can create some interesting ice formations, but every year is different. Some years, lakes like Lake Superior will even ice over, creating ice caves.

These formed at the bottom of a small set of rapids on a very cold day (around -20°C). There was little wind to disrupt the current. As a small piece of ice formed, it kept spinning in the current, forming nearly perfect circles.

Lake Ontario almost never freezes over. And sometimes – when conditions are just right – we get volcanoes!

When it gets cold enough, ice starts building up along the shoreline as an ice shelf. If the temperature, wind direction and wave height is right, the sloping limestone just offshore funnels waves under the ice shelf and up through it at a weak point.

This results in a blowhole type phenomenon, with icy water spewing up into the air through the ice.  This water falls back down and freezes, eventually building up a cone through which the water continues to erupt. A volcano! An ice volcano!

Here’s a rarity. This is a photo of a sun dog (see the rainbow bracketing the winter sun?).

But wait, you say. How is that anything to do with ice?

Sundogs form when sunlight passes through ice crystals in the atmosphere, which act like a prism and refract the light. Okay, they’re not ice, but Algonquin’s self-rolling snowballs are a sure sign of spring.

On warm days in late winter, you might spot these self-rolling snowballs on some Highway 60 hillsides on Algonquin Provincial Park. As a piece of snow drops off the crest, gravity rolls it downhill and it accumulates more mass as it rolls.

Keep your eyes open for frozen falls and other “cool” ice formations. And when you snap a pic and post it on social media, don’t forget to tag us!