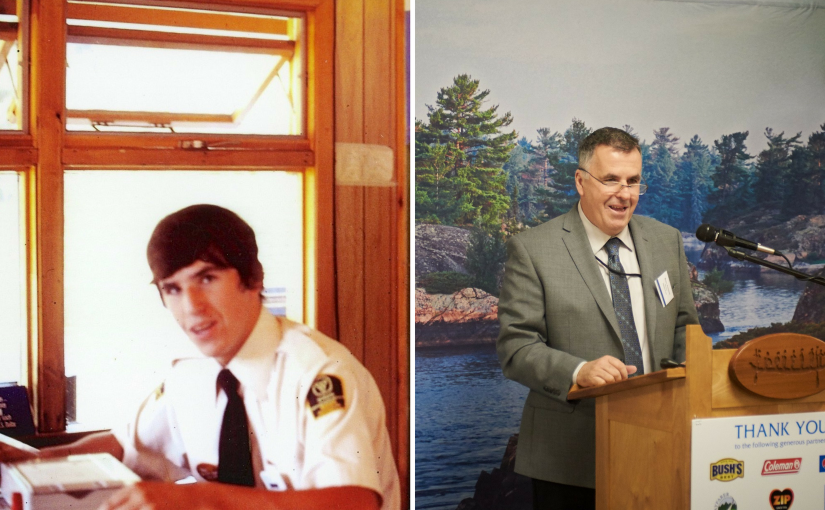 Looking for a summer job with growth potential?

Why not apply to Ontario Parks?

One of the interview questions was, “Do you have a bicycle?” Strange question, thought Bruce — until he was hired.

“I was working on a gate called Hardwood Hills. It was five kilometres — uphill — from the staff house to the gate.” He chuckles at the memory. “I don’t miss that ride.”

Many years and many parks later, Bruce returned to Bon Echo as superintendent. A few familiar faces greeted him, including the clerk from his student days.

“When I arrived in my new office, there was nothing on my desk except one little folder. Inside it was my original contract. The clerk had gone way back into the files to find it. He said to me, ‘I hope they’re paying you more this time.’”

Rolling out the welcome wagon Bruce has fond memories of those busy days at the park. His favourite task? Greeting visitors as they arrived.

“Even as a superintendent, if I looked out my window and saw cars lining up, I’d often walk over and direct traffic for 20 minutes. It was just something I enjoyed doing, meeting the people coming in and welcoming them to the park.

“Even now, if I visit a busy park, I get the urge to jump in and help.”

He’s seen a lot of change since his days on the gate. There are two popular new programs run by summer students – Learn to Camp and Learn to Fish.

These programs provide first-time campers and anglers with all the gear they need, from tents and rods to s’mores for the campfire. A friendly staff leaders guides them through basic camping and fishing skills. Bruce helped introduce Learn to Camp and Learn to Fish.

“I’m really proud of these programs. They get new Canadians and new families involved in nature and fishing. At the end of my career, I’ll be able to look back and say, ‘That was something good we did.’”

A welcome change for summer students? Computers have taken over some of the dullest duties.

“Gatehouses used to be open 24/7. If you were on the midnight shift, one of your jobs was to take all of the handwritten permits, put them in alphabetical order and write all the names and addresses into a book.

“Now the registration system is computerized.” But the greatest evolution came with social media. Ontario Parks now stays in touch with campers between visits, sharing everything from campsite vacancy reports and park events to video tutorials on how to use a camp stove or rig a fishing pole.

The downside of that connection? “Years ago, if you had a complaint or a compliment, you had to sit down and write a letter,” Bruce laughs “Now you can send it instantly, right from your campsite.” Still, it’s exciting to feel like we’re strengthening relationships with our visitors, and we love getting to hear more of their insights and feedback.

Bruce has two tips for summer jobhunters: flexibility and persistence

First, be open to working anywhere in the province “I often hear people say they want to stick close to home. At 17, I went to Bon Echo, an hour and a half from my home, and stayed in the staff house. Yeah, it was a bit scary at first, but I wouldn’t trade those times for anything.

“It’s a new adventure—you’ll love it. I often tell students, you’ll move on and start a career, but you’ll never forget your time at Ontario Parks.”

The second tip? “Go after what you want.

“The jobs are out there. We hire about 1,600 students, and another 600 seasonal staff, some of whom are students as well. “So make those phone calls. Call the superintendent or assistant superintendent. Tell them you put in your application and you really want a job. Because quite frankly, we get hundreds and thousands of applications. We’re looking for the people who really want to work in parks.”

One of his proudest moments as director is presenting the student bursary awards. These bursaries go to stand-out summer students nominated by the parks and the public.

“Each year, we have a big ceremony with a luncheon. Their superintendents come in full uniform. We’re able to provide $500 per student, thanks to donations from our partners.

“In November, we gave out bursary awards to 40 students who worked in the organization this past summer. We get to talk to them and hear what job they did and why they were nominated. Those are special days for me.”

Many summer students he’s met over the years have found a career in Ontario Parks.

“It’s really rewarding to see them accomplish things, and move through their careers. People I’ve known as students are now my colleagues.”

So what are you waiting for?

Send in your job application. You’ll have the summer of your life.