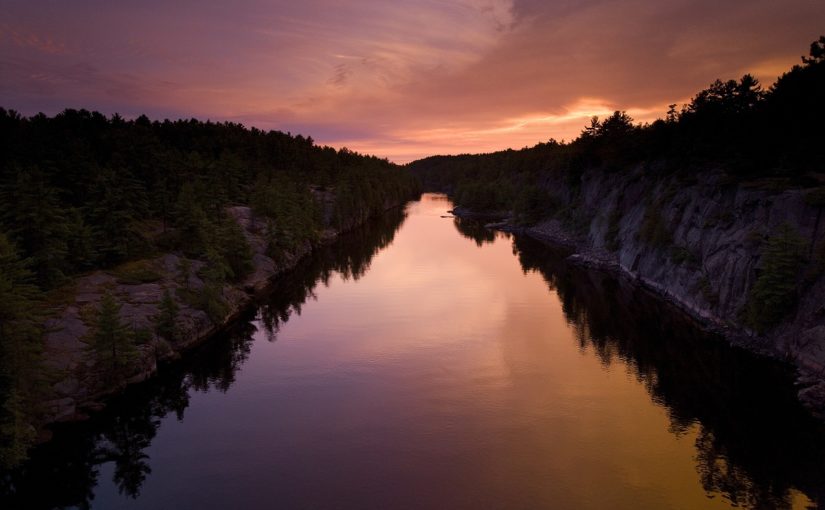 Can you hear the water speak?  The waters of the French River have many voices.

These voices travelled the river and lived along its shores. The French River has been a conduit for people, goods, and culture for thousands of years. The voices of the river are celebrated at the spectacular French River Visitor Centre. The 105 km French River was designated the first Canadian Heritage River in Canada’s Heritage River System. This accolade recognized it for its outstanding natural and cultural heritage, and recreational opportunities.

For millennia, the river linked to a continent-wide trade network, and acted as an important trade and travel route for Indigenous people from many nations.  Today, the river is home to the Dokis First Nation.

Much more recently, European and Canadian fur traders used that trading network from the 1600s to 1800s. These days, roads have replaced the ancient trade routes and waterways as Canada’s most common mode of travel and commerce. An hour south of Sudbury, Highway 69 crosses the French River from north to south. Cars and transport trucks hurtle on their way, with most drivers and passengers barely getting a glimpse of the majestic river.

A few signs beckon travellers to stop and explore. You’ll see “the route to the west,” and “French River Visitor Centre.” If you decide to pull in, you’ll find an oasis of calm. The French River Visitor Centre is a Governor-General’s Award-winning building, set a short distance from the scenic French River Gorge.

Inside, you’ll find the “Voices of the River” Exhibit Hall. The exhibits take you on a virtual journey down the French River, exploring its natural and cultural heritage, with the voices of the past and present as your guides. The French River Gorge, including the French River Visitor Centre and Recollet Falls Trail, was selected as one of the Georgian Bay Biosphere Reserve’s “Amazing Places.”

Amazing Places promotes locations in the biosphere that are accessible to the public, and tell a story about the physical, biological, and historical features of the Reserve.  They are opportunities to explore, connect and be inspired. Around the falls is a short portage that has been walked by a who’s-who of historic names, from 17th-century Algonquin Chief Iroquet, to French explorer Samuel de Champlain, to Radisson and Groseilliers who were instrumental in the founding of the Hudson’s Bay Company. Another walker of this portage was Frances Anne Hopkins, who travelled by canoe from Montreal to Manitoba in the mid-1800s, and later painted what is now the most detailed collection of paintings of the fur trade era.

Ready to experience the majestic French River for yourself? Plan your trip today!