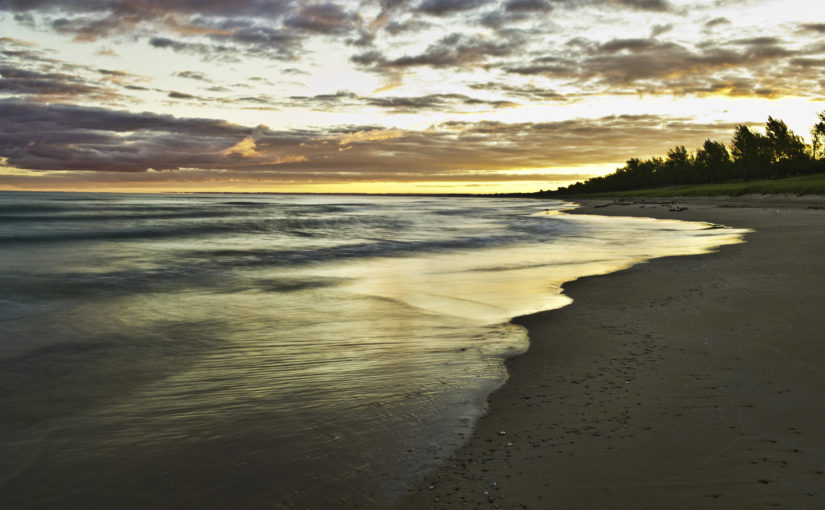 Our “Forever protected” series shares why each and every one belongs in Ontario Parks. In today’s post, Alistair MacKenzie tells us Pinery’s story.

Not until I began working for Ontario Parks did I realize that our great system of protected areas is based upon a model of representation. Each park is different and critical to the success of our protected areas system on the whole.

I am the Supervisor of Natural Heritage Education and Resource Management at Pinery Provincial Park, and I’d like to tell you why Pinery belongs in our provincial system.

One common trend about Pinery is rarity: there are rare creatures and ecosystems found throughout the park, but perhaps more importantly, the Pinery landform itself is rare.

Pinery’s landmass was created over the past 6,000 years by sand dune formations, resulting in an impressive coastal sand dune complex spanning over 9.5 km of the Lake Huron shoreline.

In a province dominated by the rock of the Canadian Shield, sand is rare. If we combined all of Ontario’s coastal sand dunes together, they would only make up less than 0.5% of our province’s land.

In addition to coastal sand dunes, Pinery is perhaps most famous for its Oak Savanna forest communities.

Unlike much of the deciduous forests of the Great Lakes forest region, the forests of Pinery have open forest canopies dominated by seven species of oak trees, interspersed with shrubs, tallgrass prairie and wildflowers that bloom from April through October.

Pinery contains several other ecological communities, each providing habitat for associated species that have evolved and adapted over eons to support each other. The park lies well within the Carolinian Zone, Canada’s most southernly ecoregion and many southern species are found here.

Thousands (if not millions) of lifeforms call Pinery home.

The park boasts over 320 species of birds, over 850 species of plants and trees, a diversity of mammals, reptiles and amphibians, and an unknown quantity of insect species.

In fact, a research partner discovered a species of moth previously unknown to science in Pinery in 2018!

It’s impossible to fully share the massive diversity of species found in the park, but here are just ten highlights:

You may not recognize this member of the milkweed family, but butterflies and countless other insects know it well a source of nectar source and vibrant colour in mid-summer.

The non-venomous Eastern Milksnake is secretive and spends much of its time seeking cover beneath logs.

Watching a Grasspink blossom for mere moments will reward you with views of countless pollinators from butterflies to robber flies to spiders, and more.

This species-at-risk shrub is very common in Pinery, but has very limited range in Ontario – making its continued protection at Pinery all the more important.

The Great Blue Heron quickly reveals its prowess as a stealth hunter; fish, tadpoles, frogs and even chipmunks risk their demise by straying too close.

The playful character of the Tufted Titmouse makes it easy to understand why birders are thrilled to spot one.

Pinery protects the most southernly population of Pitcher’s Thistle in Ontario, and efforts are underway to help restore the population size.

While other populations may exist that remain to be found, at present Pinery is the only known location for this species in Canada.

Each spring, Tundra Swans repeat a 6,000 km migration that dates back to the last ice age, a journey that takes them north to their summer breeding grounds.

Unchanged throughout eons of time, dragonflies are obviously a successful design as seemingly exact copies can be found in the fossil record.

It’s so hard to tell Pinery’s story because so many of the threads are interconnected.

In a complex landscape with many moving pieces, actions that impact one species can result in a cascade of consequences to others.

It’s all about balance, something we strive to find through partnerships, monitoring, and research.

Please stay tuned for more “Forever protected” posts about the amazing natural spaces that form our network of provincial parks.