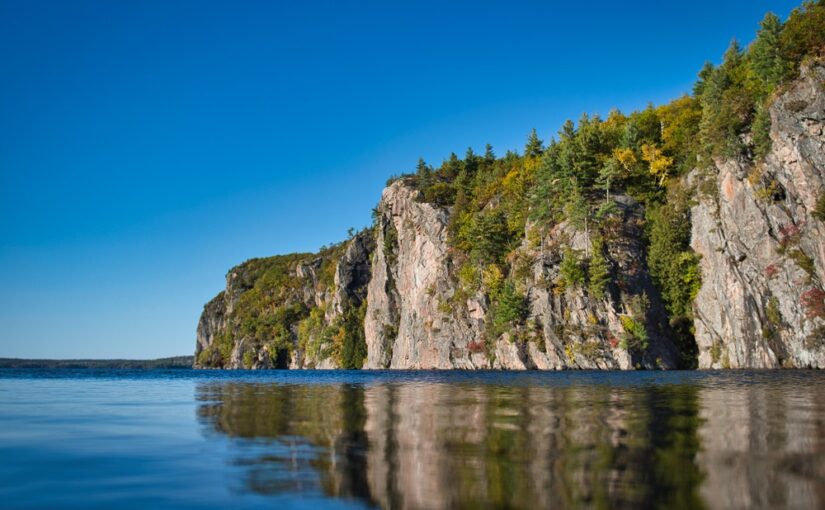 Our “Forever Protected” series shares why each and every park belongs in Ontario Parks. In today’s post, Lisa Roach from the Discovery Program tells us Bon Echo’s story.

A favourite for generations of people, Bon Echo provides amazing scenery, relaxation, and a place for families and friends to reconnect. Indigenous peoples, artists, and early recreationists have all been attracted to the Bon Echo area.

So, why was Bon Echo chosen to become a park?

It all started with a donation of land.

Merrill Denison, a Canadian author and playwright, once owned a lot of land in the Bon Echo area. He said, “Bon Echo was one of the most spectacular natural beauty spots in Ontario, a place to which people are drawn from near and far to feast their eyes in wonderment on its majestic mass and find spiritual refreshment in communion with nature.”

A forward thinker, he thought it would be a disgrace for the Bon Echo area to be divided into real estate parcels and sold piecemeal for summer building lots. So in 1959, he donated 485.6 ha to the province of Ontario for people to enjoy.

More land was later added until the park grew to its current size of 8294 ha.

Bon Echo is designated as a Natural Environment class park, protecting a part of the southern Canadian Shield landscape. A significant geological feature in the park is the outstanding cliff, Mazinaw Rock.

Melting glaciers filled in the fault, creating Mazinaw Lake. The east side (Mazinaw Rock) rises 100m above Mazinaw Lake and continues below for another 100m.

Mazinaw Rock has a unique ecosystem with exposed bedrock and a thin layer of soil. This ecosystem is known as the cliff top barrens.

Plants and wildlife survive here by adapting to the harsh, dry environment, created by the relentless sun baking the ground. Wild Columbine, Red Oak, Juniper, and Low Sweet Blueberry dominate the top of the cliff.

Did you know the cliff supports an old growth forest?

The trees anchor in cracks and depressions with shallow soil. Some of these cedars are over 300 and 400 years old. One was 941 years old!

Species at risk like Peregrine Falcons and Five-lined Skinks call the park home and can be seen on or around Mazinaw Rock.

Each spring, staff and visitors look forward to the return of Peregrine Falcons (the fastest animal in the world) and hope to see an adult pair with one or two of their chicks.

These birds breed in open landscapes and will often nest on ledges of tall, steep cliffs like Mazinaw Rock. One adult pair has raised their young here for many years.

The Peregrine Falcon population was greatly reduced in the 1950s and 1960s due to the toxic effects of a pesticide called DDT. Thankfully, their numbers have increased since then, however this bird is still a species of special concern on the Species at Risk in Ontario list.

Like the falcons, you may see Ontario’s only lizard, the Five-lined Skink on the cliff (or at Joeperry Lake).

They like to bask in sunny spots on the cliff and will disappear into crevices to cool down or escape from predators.

It’s easy to distinguish young skinks from an adult. Young ones are black with five cream-coloured stripes down the back and a bright blue tail, while the five lines on adults fade over time.

Mazinaw Rock and the surrounding area are sacred places for Indigenous peoples.

263 pictographs (rock paintings) attest to the power of the place and the spirits living here. The pictographs are reddish to reddish-orange in colour and a few feet above the waterline.

Thought to be records of visions or dreams, images of canoes, turtles, thunderbirds, and spirits such as Mishibizhiw and Nanaboozhoo may be seen.

The symbolism of other images remains a mystery, only known to the painters themselves.

Later, artists including members of the Group of Seven such as Franklin Carmichael, A.J. Casson, and Arthur Lismer, were inspired by Mazinaw Rock and its surroundings.

Some members of the Group of Seven made several visits in the 1920s and 1930s at the invitation of Merrill Denison. He knew them from the Arts and Letters Club at the University of Toronto.

Ask Discovery staff for more information about their works! Next time you’re at Bon Echo, think about Mazinaw Rock and some of the species that live on it.

Like Merrill, we need to continue to protect this part of the southern Canadian Shield for ourselves and future visitors to enjoy.