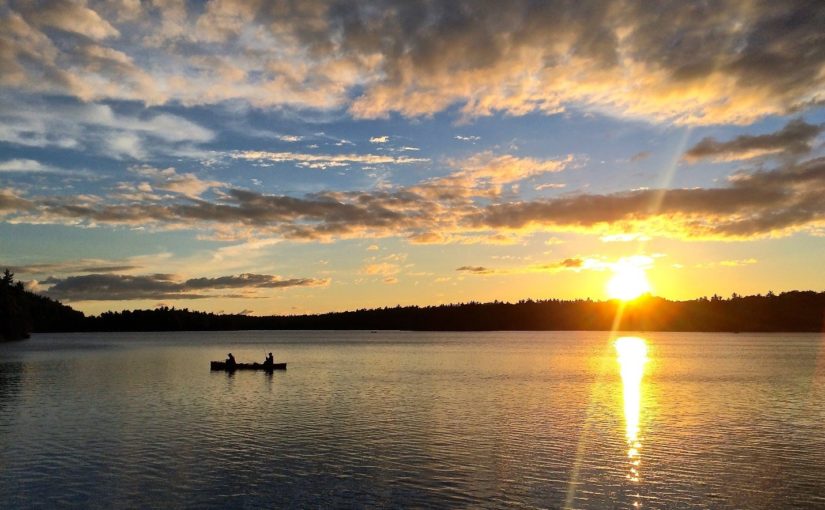 A breathtaking 13,000 ha of the Thirty Thousand Islands and eastern Georgian Bay Coast is protected by The Massasauga Provincial Park, between Moon River and Parry Sound.

The Thirty Thousand Islands are the world’s largest freshwater archipelago, a 200 km chain of pink rocky islands from Port Severn to the French River.

Anyone who has visited the area will tell you it’s simply gorgeous.

With a crinkled coastline of bays, inlets, coves and river mouths, there are boundless fishing opportunities. The park also contains a number of inland lakes surrounded by pine-dominated forest.

But no roads or campgrounds. A prime canoeing area on the interior lakes and excellent kayaking and boating area out on the bay, the park was named after the Massasauga Rattlesnake, a species at risk that has found refuge in this park and other protected areas along the coast.

The park is part of the Georgian Bay Biosphere Reserve, recognized by UNESCO as one of the world’s special places, and one of Georgian Bay’s “Amazing Places”.

In the summer, the park’s inland lakes and coastal waters are a popular place for backcountry and paddling enthusiasts. Inland lakes are motor-free, so canoes, kayaks, and paddleboards rule.

Kayakers are more common out in the big open water.  There are no portages, and kayaks are more suited to larger bodies of water. Motorboats, sailboats and powerboats can be found touring the open water, mooring in sheltered coves, or fishing for a variety of species.

In spring, these waters are much quieter.

Georgian Bay has long been known as a fantastic place to catch fish.

Samuel de Champlain, French explorer, geographer and founder of New France, traveled these waters in 1615, guided by the Wendat peoples (called “Huron” by the French). He noted: “It abounds in many kinds of excellent fish… principally in trout, which are of enormous size… I have seen some that were as much as four and a half feet long, and the smallest one sees are two and half feet in length… Also pike of like size, and a certain kind of sturgeon, a very large fish, and marvelously good to eat.”

Elusive Muskie (cousin of the Northern Pike) are found in these waters, although there is a later start to their fishing season. Walleye can be plentiful, but are fond of deeper dark water. Both Large- and Small-mouth Bass make the park home.

Whatever your favourite species to fish, the area is rich in diversity for all anglers to enjoy. While summer is obviously a great time to get out on the water, spring is a perfect time to visit the park and fish.

Remember, Northern Pike are open all year for fishing in the waters of Georgian Bay.

Tips from a superintendent

Sean Smith, the park’s assistant superintendent, has been paddling, boating, and fishing The Massasauga’s waters for years. He has some advice for anglers looking to catch  big-time Northern Pike:

Big Northern Pike, like any mature fish, are a special resource. Seeing them shoot away in great shape after a clean release is just as satisfying as catching them.

Catch and release preserves the species and local populations, and keeps the area a great fishing spot. Getting on the water

Access to the campsites on the islands and channels in The Massasauga is through an access point we call “Pete’s Place” at the south end of the park.

Pete’s Place access point is located approx. 17 km down the Healey Lake Road off Highway 612, close to the village of Mactier. There are two boat launches available at Pete’s Place, one for motorboats and the other for canoes and kayaks.

Camping in the Massasauga

There are 135 backcountry campsites available in The Massasauga, all water-access only. These sites can be booked on the Ontario Parks reservation service or by self-serve registration at the park.

Campsites are numbered, and reservations are for specific campsites. Please camp only on designated sites.

Each site has a picnic table, fire ring with a grate (remember, build your campfires only in designated fire pits), and a box privy toilet. These backcountry sites are suitable for most size of boats. Large cruising boats have access to seven mooring/anchoring bays within the park’s waters. Black Bears frequent the park. To protect your food, half of the backcountry campsites in The Massasauga have bear-proof lockers.

Most of these are located on campsites accessible from Georgian Bay (Blackstone Harbour area, Captain Allen Strait), plus a few interior lakes.

Remember to store food (and garbage) out of the reach of bears and other animals.

If you happen to camp on a site without a bear-proof storage locker, hang your food pack from a tree on the site. Pack all garbage out with you at the end of your trip.

Everyone likes a shore lunch of fresh-caught fish while on a fishing trip.

At The Massasauga, however, there are few shore lunch opportunities, so we encourage anglers to return to their own campsite with their catch.

The Massasauga’s Georgian Bay coast is a maze of islands, channels and peninsulas. It is easy to get lost. On the water, islands and mainland blend together, making navigation without a park map and compass something only those very familiar with these waters can do.

Maps are extremely important for navigating The Massasauga.

Buy one of the Federal 2202 series marine charts, as they are the number one requirement for boating in the park. Carry it with you and become familiar with it before your trip.

Federal navigation maps for the Great Lakes and other waters can be found here. They will help you in navigating the many channels.

Remember to carry a compass that you are familiar with.

Park maps are necessary for campsite locations and numbers, park info, regulations, and topographic details that the navigation maps don’t have.

If you aren’t a backcountry camper…

Just because you’re not staying overnight, that doesn’t mean you can’t experience The Massasauga’s wilderness!

The parking areas at Pete’s Place and Three-legged Lake are only large enough to hold the number of vehicles driven by backcountry campers, therefore day use parking is not permitted at either access point.

That said, there are trails like the Wreck Island Trail that can be accessed by visitors entering the park by boat, canoe, or kayak for the day.

Calhoun Lodge in Blackstone Harbour (just north of Pete’s Place) is an example of early cottaging in the area, preserving a set of log buildings built in the 1930s.

A trail connects Calhoun Lodge with the Baker Homestead, a farm established in the forests of The Massasauga in the early 1900s. For car campers wishing to spend some time on Georgian Bay, Killbear Provincial Park has a number of road-accessible campgrounds.

Oastler Lake Provincial Park is located on a small interior lake southeast of Parry Sound. Campers at Oastler Lake can still access Georgian Bay through Killbear with their Oastler campsite permit for no additional fee. Please refer to the MNRF Recreational Fishing Regulations Summary for up to date information on fishing regulations and species limits for the waters in and around The Massasauga:

What are you waiting for?