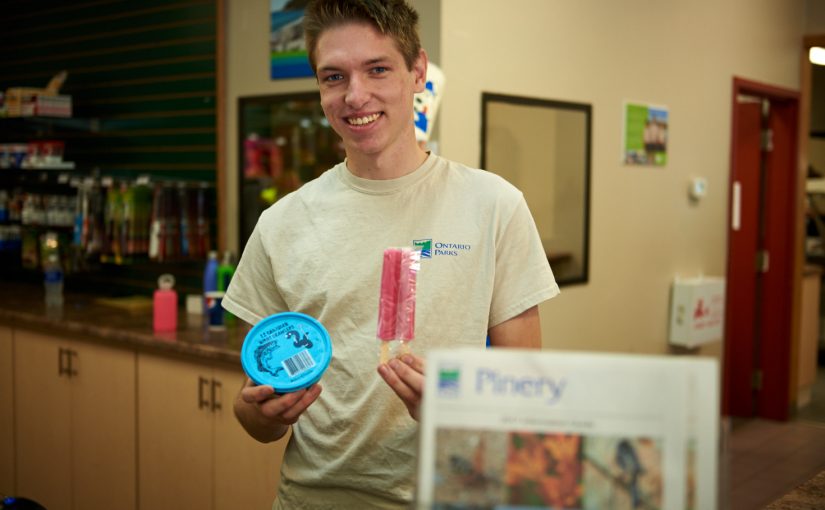 The Old Ausable Channel runs through Pinery Provincial Park and hosts an impressive variety of species, many of which are species-at-risk.

But over the past few years, we’ve noticed a lot of extra litter ending up in the channel… The 14 km section flowing through Pinery represents what many of Southern Ontario’s rivers would have looked like prior to European settlement. This ecological time capsule is untouched by today’s pollutants due to a river diversion created at Grand Bend in 1891 that severed the inflow into the Pinery section.

Over the past few years, park staff have noticed that a lot of plastic worm containers (which are sold at the park store) were ending up in the channel itself.

In addition, many people were dumping their unused worms (and soil substrate the worms come in) onto the ground, not realizing they were introducing invasive species of worms.

Most problematic of all, the dumped soil substrate can introduce invasive and destructive plants and arthropods.

We really needed to ensure the worm containers were being properly disposed of.

Starting this year, park visitors can now return their worm containers to the Park Store in exchange for a popsicle (or non-food alternative reward).

And it doesn’t just have to be your worm container. Any discarded worm containers you fish out of the channel or off the ground earn another reward.

This simple idea has turned an item once seen as trash into a valuable commodity. We’re hoping that once enough people find out about the program, floating worm containers and invasive soil/worms will be a thing of the past!

It just goes to show that a small change (or, in this case, a small popsicle) can go a long way to cleaning up a river!