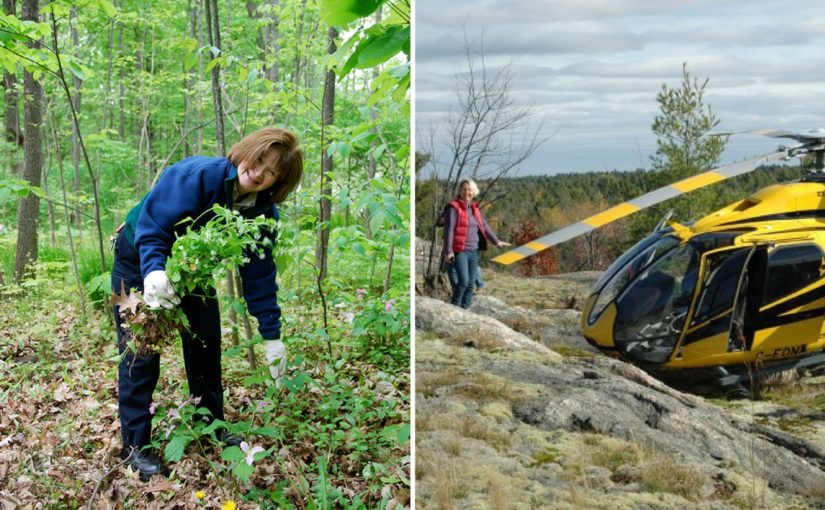 In 2020, we have hundreds of wonderful female employees in Ontario Parks. But it wasn’t always this way.

Some hardworking women helped pave the way for opportunities for women in management positions. Here are the stories of two women who have the honour of being the “first” in their respective roles. Kathy started with Ontario Parks in 1975 as a summer student at Bon Echo Provincial Park. Over the years she held various positions throughout parks, and at the White Lake Fish Culture Station. Kathy was honoured to be a role model for women working in parks.

“It is such an honour. I always felt a strong sense of pride to be a part of our parks system and the MNRF. People supported me and encouraged me throughout my career, and I was thankful for that. It was important to me to not let other women down.” Staff orientation day was Kathy’s favourite day of the year. Every year, she watched more staff join the Ontario Parks family, and bond as a team.

In Kathy’s first years as a superintendent, few women held leadership roles in Ontario Parks. One of her greatest joys was watching our workforce evolve, as more and more women took on management positions.

“When I used to go the parks staff conference you’d see very few women there. Every year you’d see more and more women, and it was just so great to see.”

Kathy continued to lead parks until her retirement in 2013, after 38 years with Ontario Parks. Sandy White’s career with the MNRF started in 1981, when she worked as a Junior Ranger at Ivanhoe Lake Provincial Park. Sandy spent years working in the environment, including gold research in the arctic, acid rain research, lake sampling, fisheries research, firefighting, and tree planting. Every summer, Sandy came back to work as a ranger for the MNRF. Sandy became Ontario Parks’ first ever female Zone Manager in 2011. “I really had this passion for the environment, and throughout my journey this always brought me back to the MNRF.”

Sandy eventually moved on to work as coordinator of the ranger program, and spent 20 years working in youth programs. Seeking a change, she came to Ontario Parks in a role overseeing all of the provincial parks in southeastern Ontario.

When it comes to their favourite memories, both Kathy and Sandy have lots to choose from. Sandy’s favourite thing about her current role is being able to leave a positive legacy for young women wanting to work for Ontario Parks.

“I’m just so proud to be able to say the legacy I’m leaving is a woman coming into a senior management role in Ontario Parks, when it was all men at the table.

“In my zone, you’ll see that my Assistant Superintendent positions are moving towards a 50/50 split for women and men. More women have come up into the roles of Park Warden and Operations Technicians, which is giving them the skill set to be leaders in this organization.”

Some words of advice

Kathy and Sandy have some wise words of advice for success.

“I’m a firm believer in being productive and taking initiative. Empower yourself by taking risks, and step outside of your comfort zone. Stand up for yourself and the people you work with, but do it in a respectful way. Stay positive and motivated, and take opportunities. Remember to be kind, have a sense of humour, and smile often.” – Kathy

“Follow your dreams, and find what you really want to do. If things aren’t right, step up to the challenge and make a change. Empower people to bring ideas forward. Even if they seem ludicrous, keep trying, because eventually if there’s momentum there will be change, and change for the better. We talk about diversity and inclusion a lot, but if we actually get people to action then things will change.” – Sandy

Thank you to Kathy and Sandy for all of your hard work!