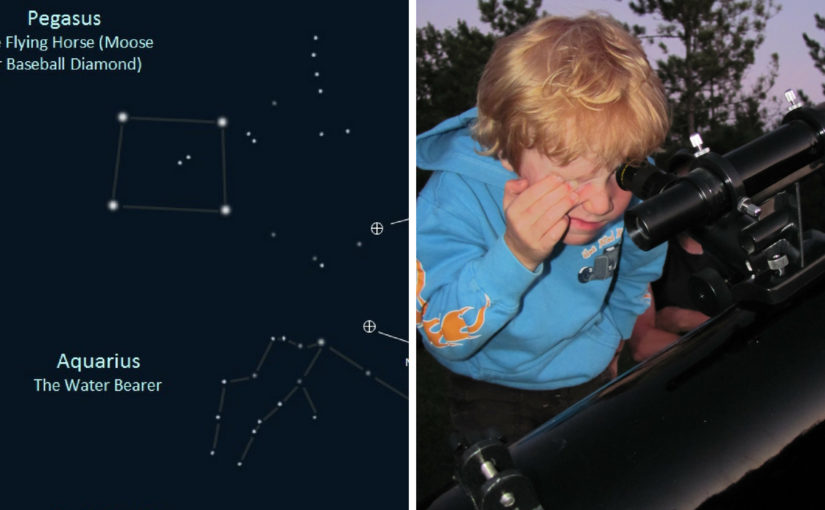 In our September edition, we discuss Pegasus the flying horse (moose or baseball diamond), Aquarius the water bearer, and Piscis Austrinus the southern fish. As we move into the fall, we see one very large and prominent constellation officially known as Pegasus, the flying horse.

To the Anishinaabe people, this region was known as the moose. Moose are incredibly strong animals, well-adapted to their environment, and are held in high regard. Our celestial moose is well displayed, even including the noticeable fur underneath its chin. Faint stars mark out the front of the antlers, and other stars make out the body and legs.

Having a moose in this section of the sky suits our water theme (along with the water bearer and fish). To learn more about Anishinaabe sky stories, one may refer to such books as Ojibwe Sky Star Map by Annette Sharon Lee and William Peter Wilson. During an astronomy night in one of our provincial parks, visitors were thrilled to see a home run batted out of this baseball diamond! A meteor shot out from the “home base” star just as the presenter finished describing the constellation.

The classical form of Pegasus is in the form of a flying horse. This is one of the few constellations that does indeed look like a horse, even if that horse is upside down.

While there aren’t any wings on this horse, the ancient Greeks associated it with Pegasus the flying horse who was born from the body of Medusa. Interestingly, in keeping with the water theme this month, “pegai” in Greek can mean “the waters.” The horse is said to have caused water to come forth after hitting the ground with his hoof.

Up and to the right of the horse’s muzzle, we find a globular star cluster – M15. This is perhaps one of the best clusters found in the autumn skies.

The next constellation on our night sky tour this month is Aquarius the water bearer. This is one of those constellations which is really hard to see as a person carrying water.

Aquarius represents the young boy Ganymede, who was seconded into providing the “nectar of the Gods” to the Olympians. Off of his left shoulder is the globular star cluster M2.

The last of our constellations for September is Piscis Austrinus, or the southern fish.

In this case, the constellation does not show two fish, as in the much more popular Pisces. Instead, it’s a solitary fish, which may be the parent of the two Pisces fish.

What gives Piscis Austrinus some distinction is the star Fomalhaut, the brightest of the autumn stars. Fomalhaut is a star that lies 25 light years away from us, and is somewhat more powerful than our sun. Fomalhaut has several debris disks leftover from its formation.

In 2008, an image taken by NASA’s Hubble Space Telescope of the Fomalhaut System provided the first glimpse of an extrasolar planet, meaning a planet beyond our solar system (see image below). Want to learn more about what to look for in our night skies? Check out our “Eyes on the skies” series!