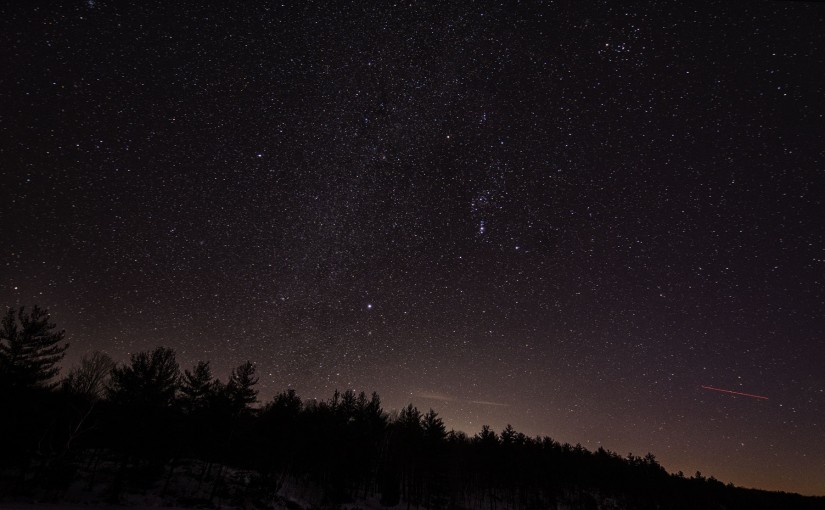 Though many people know it simply as “the Big Dipper” (think: ladle), this constellation is typically associated with bears.

According to Haudenosaunee tradition, the four stars of the rectangle form the shape of a bear, while the other three stars represent three hunters actively engaged in the hunt. The first hunter, closest to the bear, is Robin (a completely black-coloured bird). The next star/hunter is Chickadee, and the farthest hunter/star from the bear is Moosebird.

The trio pursue the bear from spring to fall, with the bear constantly outpacing the hunters. However, in the fall the tired bear stops and stands to fight the hunters. At this point, Robin shoots an arrow at the bear and wounds it. The blood from the bear falls onto the trees, explaining why they change colour in the fall. Likewise, the bear’s blood also completely covers Robin. While Robin does his best to shake the blood off, a red streak remains down his midsection permanently, explaining why robins today have red breasts.

Classical mythology also sees this constellation as a bear, accounting for the name Ursa Major or “Great Bear.” The story of Ursa Major comes from the story of Callisto and Arcus. Callisto was transformed into a bear by Zeus’ jealous wife Hera, and was about to be killed by her son Arcus, who did not recognize his mother in bear form. Just as he was about to spear Callisto, Zeus took pity on the situation and transformed both mother and son into two constellations: “Ursa Major” (Great Bear) and “Ursa Minor” (Little Bear).

In our light-polluted skies, it is difficult to see all of the faint stars that make up the body of the Great Bear. However, we can see the enormous tail and midsection of the bear forming what we know as the “Big Dipper.” It is amusing to note that the most prominent feature of the Great Bear – its long tail – is almost completely absent on the bears wandering our wilderness today.

Finding North from the Big Dipper

Find the two stars of the bowl that are opposite where the handle meets it. These two stars “Dubhe” and “Merak” are known as the “Pointer Stars.”

Once you have found Polaris, simply follow a line directly to the ground and that will be north. Because these constellations never set from Ontario (they’re always visible, no matter what time of the night or day of the year), you can use this skill to find North with a fairly high degree of accuracy.

In Greek mythology, Draco is the dragon Ladon who is tasked by Hera to guard her apple trees. As one of his 12 labours, Hercules had to bring back some of the apples from the tree and kill the dragon. Today, the constellation of Draco sit prominently amongst the northern stars and the constellation of Hercules (discussed in a future edition) sits by its head.

One of the brighter stars of Draco – Thuban – lies between the bowl of the Little Dipper and the stars Mizar and Alcor. Because the Earth’s poles slowly move over many thousands of years (we call this procession), Thuban and not Polaris was actually the North Star between about 4000 to 2000 BC. Many of the Egyptian pyramids were aligned in such a way whereby a passageway was aligned to Thuban, the North Star!

For more stories of our stars, check out our other featured constellations.