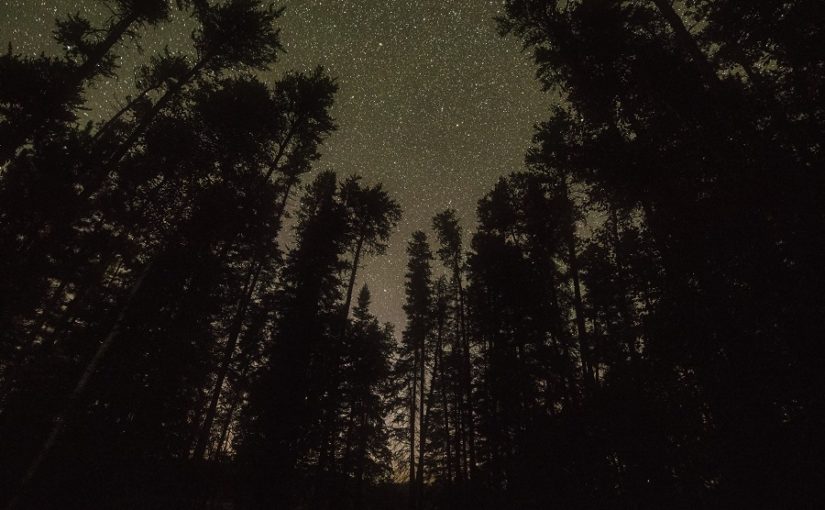 Today we will explore one of the most well-known constellations: Orion.

What is a constellation? To start, let’s look at what a constellation is.

A constellation is merely a two-dimensional view of the stars as seen from our planet. The stars are actually at quite different distances from us and are generally unrelated to the other constellation stars.

For example, the middle star of Orion’s belt (Alnilam) appears the same brightness as the other two belt stars. However, in reality, it is two times further away than both the left-most belt star Alnitak, and Betelgeuse, the red star marking out one of Orion’s shoulders.

Orion is the great and boastful hunter of Greek Mythology. Underneath Orion’s belt is his sword. The middle object within the sword is a fuzzy, nebulous object that, when magnified, appears as a glowing gas cloud (easy to see in binoculars from provincial park skies).

Orion is accompanied by his hunting dogs (Canis Major and Canis Minor), and is doing battle against Taurus the Bull.

To find Canis Major, follow the belt of Orion down towards Sirius, the brightest star in the night sky. A collection of medium bright stars flowing down and to the left marks out the body of the great dog.

If one follows the belt stars to the upper right, they will find the reddish star Aldebaran which, with a collection of faint stars, forms a “V.” The “V” represents the face of the bull (Aldebaran is the eye), and there are two stars above the face forming Taurus’ horns.

Towards the back of Taurus, one can find a cluster of stars known as the Pleiades. This cluster, also known as the “Seven Sisters,” is not a formal constellation. However, it is often mistaken for the little dipper.

To learn more about January’s astronomy, visit our Eyes on the Skies post.