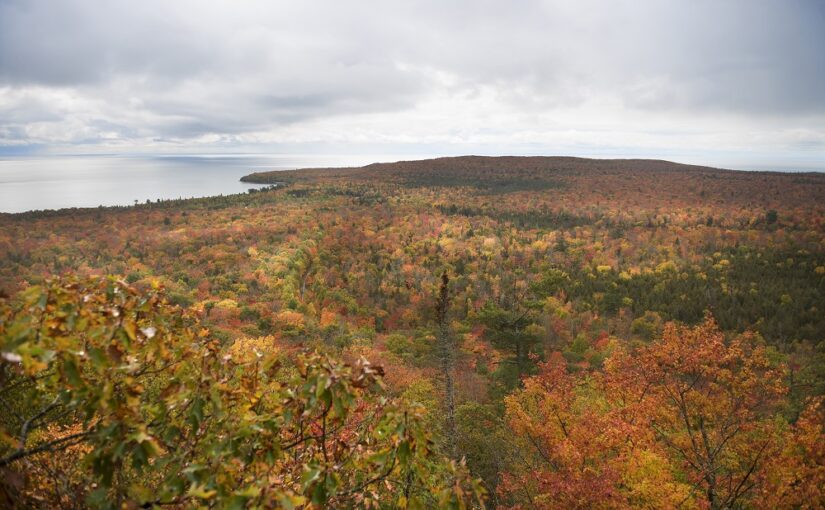 Ah, fall…the weather cools down, the bugs disappear, and our parks turn into a kaleidoscope of stunning reds, oranges, and yellows.

Our parks are home to some amazing must-see vistas that are illuminated each year by autumn’s changing leaves. Here are a few of our favourites.

Known by beach-lovers for its stunning 3 km sand beach, Pancake Bay Provincial Park is equally exciting to explore in the fall. In mid-September, the Sugar Maples, Red Oaks, Red Maples, and Yellow Birch that dominate the forests of this part of Lake Superior’s coast gain a tinge of colour. By early October, they’ve turned to brilliant shades of red, gold, peach and burgundy. From the lookout you can see across to Whitefish Point. This stretch of Lake Superior is known as the “graveyard of the Great Lakes” where the Edmund Fitzgerald sunk in a fierce Superior storm in 1975.

Fall turns the Trembling Aspen, Tamarack, White Birch, and Bracken Ferns of the boreal forest from emerald to gold in this northern landscape shaped by glaciers.

See a new side of the boreal forest by hiking the Tamarack Trail at Kettle Lakes.

This short 1 km trail meanders around Tamarack Lake, a wetland created by glacial ice over 12,000 years ago. The namesake of this lake, the Tamarack Tree, turns bright gold before dropping its needles, making it a deciduous conifer — a unique feature for a cone-bearing tree.

Explore the park by hiking trail, bike on park roads or 14 km of easy mountain bike trails, or a scenic drive to visit one of our many lakes (22 to be exact!).

Enjoy the stunning colours around Heart Lake, Green Lake or Hughes Lake — actually, all their lakes are beautiful!

It is open until October 11, 2022, offering electrical and non-electrical campsites. Paddleboard, kayak, canoe and bike rentals are all available.

The Twin Points Trail is the perfect way to experience Killbear Provincial Park if you have just an hour or two.

It passes through forest, over rock barrens, along Killbear’s Georgian Bay shore, and leads to a hidden beach.

The Twin Points in the trail’s name are wide expanses of smooth bedrock that were sanded down by the glacial ice over thousands of years. The trail begins in the park’s day-use area, making it easily accessible for both day trippers and for campers at one of Killbear’s many campgrounds.

Killbear is open until the end of October for camping and day use.  Georgian Bay moderates fall temperatures, and fall colours happen later than further inland.  Peak colours can continue well after Thanksgiving.

Named for the log chute that lumberjacks built to bypass the main falls on the Aux Sables River during log drives, this park is centered on a river of waterfalls.

The Twin Bridges Trail begins at the main falls and viewing platform, and follows the Aux Sables past a series of falls, cataracts and rapids known as the Seven Sisters. The visually stunning gorge is formed by one of the many faults in the Canadian Shield that the French River follows down to Georgian Bay. Glacial ice sculpted the bedrock and gouged out the fault lines. The French River was designated the first Canadian Heritage River in Canada’s Heritage River System. This accolade recognized it for its outstanding natural and cultural heritage, and recreational opportunities. The French River was a key connection in a continent-wide trading network established by Indigenous people. It became a key link in the Fur Trade Era, and was important in the establishment of Canada itself. At Recollet Falls, there is a short portage that has been walked by a who’s-who of historic names, from 17th century Algonquin Chief Iroquet, to French explorer Samuel de Champlain, to Radisson and Groseilliers who were instrumental in the founding of the Hudson’s Bay Company.

Wetlands are important ecosystems that store and filter water as well as provide diverse habitat for plants and animals. Mashkinonje Provincial Park, 60 km southeast of Sudbury, protects a variety of wetland types (marshes, bogs, swamps, fens and ponds), interspersed with undulating granite ridges along the West Arm of Lake Nipissing.

The Loudon Basin Peatlands is a provincially significant wetland in the park that from the air, looks like a swirl. It’s a swirl of bedrock ridges with wetlands in-between.

The first 600 m of the Loudon Peatland Trail is barrier free and leads to a viewing platform at the peatland’s edge. Fall is a great time to go, when even the wetland grasses become golden.

Ready to hit the trails?

Plan your trip to see these once-in-a-lifetime views today! Don’t forget to prepare for the weather.