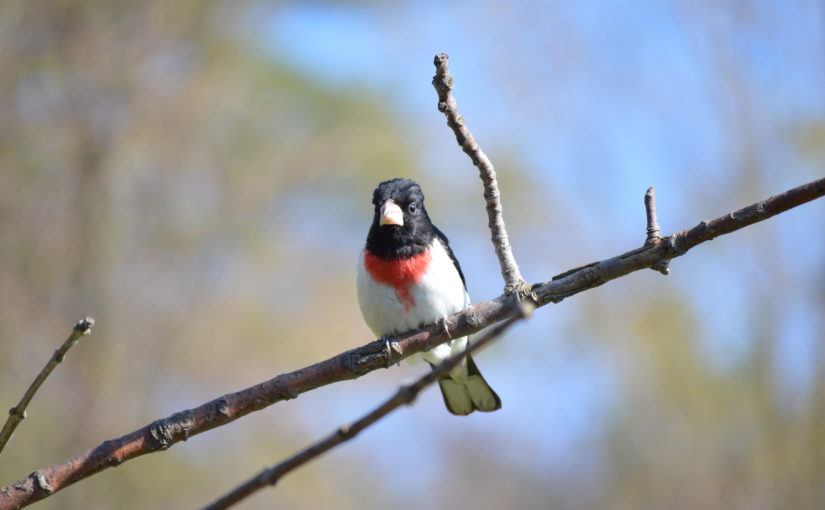 The signs of spring always grab our attention.

We’re excited by the arrival of the familiar birds, butterflies, and fish that we see each summer. Perhaps it’s simply because we yearn for the end of winter. Or maybe it’s the feeling that a good friend has returned from a long vacation down south.

What we neglect to notice sometimes though, is the beauty of their departure.

Take a moment this fall to stop and appreciate the wonder of the fall migrations, how they reoccur year after year, like clockwork. Head to a park to witness this phenomenon; it will expose you to an incredible variety of wildlife.

The sight of black and orange wings fluttering around can mean only one thing – the fall season is almost here. The Monarch Butterflies are here. Monarch females lay, on average, 700 eggs in August. Each egg is about the size of a pinhead, laid on the undersides of Common Milkweed plants. After hatching, they spend 10-14 days as larvae, and grow to 3,000 times their weight.

The next step is the pupa stage, where they spend another 10-14 days in a chrysalis. Near the end, the chrysalis changes from a bright green to a clear colour through which the orange and black of the adult’s wings are visible.

The Monarchs that hatch in late August will then fly 3,000 km to central Mexico to escape the Canadian winter – and the cycle starts again.

The rivers that flow into Ontario’s great lakes are the ideal habitat for migratory fish, including many salmon and trout species. Chinook, Coho, and Pink Salmon, as well as Rainbow Trout, swim these rivers every autumn.

Salmon in Ontario lay their eggs in streams in the fall, which don’t hatch until the spring. The hatchlings often remain in these streams for months, before beginning their migration to the Great Lakes. Adults remain there for about four years, before they return to the streams and rivers to spawn, and later die. Sauble Falls Provincial Park is the perfect spot to try your luck at some fall fishing. There are great opportunities to fish salmon and Rainbow Trout late into the season (and you can see them try to jump the waterfall). It’s possible to fish from the shore, wade into the water, or even throw a line from your campsite in certain areas.

Lake Superior Provincial Park is another great fishing spot, a little further in Ontario’s north. Chinook, Coho, and Pink Salmon run up all the bigger park streams. Brook Trout are also a popular catch. The general rule of thumb is that the further you fish from park access points, the better the fishing.

You can use Fish ON-Line to explore opportunities. Remember: a fishing license is required!

Billions of birds fly south to escape the frigid northern winters. Many travel along migration superhighways – swaths of forest that connect natural areas to one another and help animals migrate.

Many Ontario Parks are rest stops for the migrators. Several are classified as IBAs, or Important Bird Areas. They’re key locations in protecting Ontario’s biodiversity (and for birdwatching). Many small birds like vireos, warblers and thrushes, start moving south in mid-August and continue to do so into October. Shorebirds are best seen in September. And of course, there’s the always ubiquitous Canada Goose, on the move from September to November.

Many provincial parks have good birding opportunities. Rondeau Provincial Park is in an area of overlap for the Mississippi and Atlantic Flyways. Over 360 species of birds have been identified, including rarities such as Townsend’s Solitaire, Yellow-throated Warbler, and Painted Bunting.

Over 80% of all shorebird species that breed in North America have been found at Presqu’ile Provincial Park. Songbirds like warblers, thrushes, flycatchers, and sparrows use it as a resting point when crossing the great lakes. It’s also important for larger birds, like gulls, herons, cormorants, and ducks.

Located on the Huron Fringe, MacGregor Point Provincial Park is in the middle of a migratory corridor. Many are songbirds, including nearly 20 species of nesting warblers in or adjacent to the park. In fact, over 170 different species have been observed within park boundaries over the history of the annual Huron Fringe Birding Festival.

There’s a lot to love about fall. The sweater weather. The vast vistas of colourful leaves. The sounds of crickets and the start of school (parents rejoice!). And now, hopefully, the fall migrations are also at the top of your mind.

Come see them. They’re a sight to behold.

Interested in an Ontario Parks visit to see the migrations? Book online here.