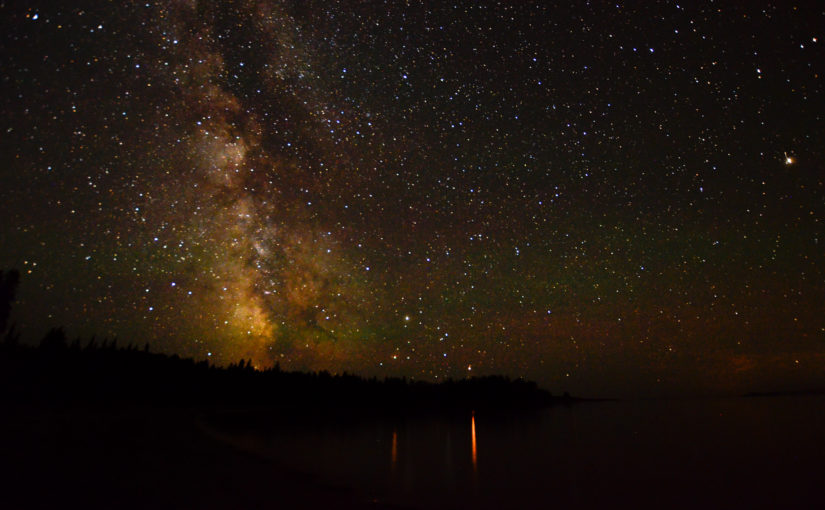 Welcome to the Ontario Parks “Eyes on the skies” series. This series covers a wide range of astronomy topics with a focus on what can be seen from the pristine skies found in our provincial parks.

Many people consider September to be the finest month of the year to enjoy Ontario’s outdoors.

The bugs have all but left and the daytime temperatures are cooler, making the weather ideal for strenuous activities such as hiking or canoeing. To top it off, the leaves begin their beautiful transition through the colours of fall.

With the much shorter days, the nighttime skies are full of celestial splendors that we hope you will enjoy discovering in this edition of “Eyes on the skies.”

Here are our astronomical highlights for September, 2020:

The sun continues its apparent drop in elevation as it reaches Fall Equinox on September 22 at 9:32 a.m.

This is most noticeable during the evening when, in mid-August, it seemed that there was quite some time between the end of dinner to twilight as compared to the end of September, when we are barely finished cleaning the dishes when twilight is upon us! For those of us relying on daylight to paddle to that distant lakeside campsite or hike that last ridge before setting up for the evening, knowing when the sun sets is important. September’s lunar phases of the moon occur as follows: Did you know many First Nations teachings, including those of the Anishinaabe and the Haudenosaunee people, use the back of a turtle’s shell as a lunar calendar? Learn more here.

Jupiter and Saturn continue to be spectacular objects in the southern sky in the late evening.

Joining them after 8 pm is the planet Mars, which is nearing its closest approach to the Earth in late September/early October. This is the best view of the planet Mars until 2035!

Without telescope, Mars appears as a bright reddish object high in the sky at southeastern sky at midnight. In a telescope, however, Mars can display its polar caps and surface feature (Mars is the only planet that we can see surface features on).

Interestingly, just like we go through the four seasons on Earth, Mars also goes through seasons and we can see its north and south polar caps expand and contract just like ours does.

On the evening of September 25, one will be able to see all the outer planets (planets further away than the Earth) plus the moon. In order from west to east, one can see Jupiter, Pluto, Saturn, our moon, Neptune, Mars, Uranus, and the dwarf planet Pluto.

Through a telescope, most of these planets also display their moons. There are no major meteor showers in September.

However, towards the end of the month the Orionid meteors begin to appear. While they peak in late October, some of these fast moving meteors can be quite bright.

In August’s featured constellations, we discussed Sagittarius, Capricornus, and Delphinus.

There is a water theme in September’s edition. We discuss Pegasus the flying horse (moose or baseball diamond), Aquarius the water bearer, and Piscis Austrinus the southern fish.

…the speeds of light and sound can provide us with a lot of useful information? That we can even apply when we’re camping?

Read how we can apply this knowledge to stay safe when we’re camping in our post “Understanding the speeds of light and sound.”

This completes our review of the September skies. Come back next month to learn more about our galaxy and the stars of October.