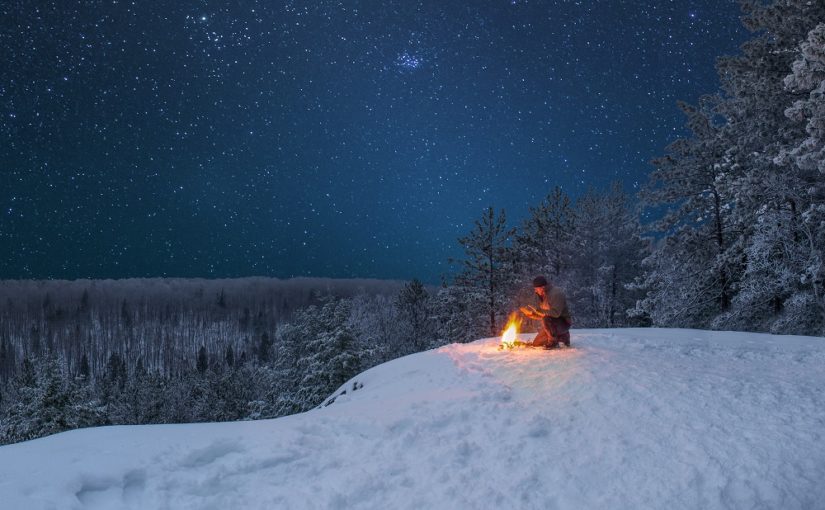 December brings some of the darkest skies of the year.

Take advantage of this great opportunity to go out into our parks. Breathe in the peace and solitude of December days and the bounty of the starlit skies.

Here are our astronomical highlights for December, 2021:

Many people believe that on the Winter Solstice, usually around December 21, we experience the earliest sunset and latest sunrise.

However, while the Winter Solstice marks the Sun’s lowest point in the sky at solar noon and the day with the least amount of light, the earliest sunset always occurs earlier in the month, and the latest sunrise usually occurs in early January.

This year, for a viewer at 45 degrees north, the earliest sunset occurs around December 10. That means, as of December 11, our sunsets occur later each day until they peak in June.

The sun completes its apparent southerly drop on the Winter Solstice on December 21 at 10:57 am.

In ancient times, people from many civilizations north of the equator were joyed with the cessation of the sun’s apparent southerly movement, and celebrated the beginning of its northerly rise.

See our post from March to learn more about the solstices and equinoxes. December’s lunar phases are as follows: Have you noticed a really, really bright light in the southwest shortly after sunset? If you have, you are not alone in wondering about this amazingly bright object that isn’t an airplane but seems to slowly set with the stars.

You have spotted the planet Venus which, on December 7, is at its brightest for the next few months. Venus is so bright that, in a clear blue sky free of pollution, you can see it during the daytime without telescope or binoculars.

Unlike the outer planets Jupiter and Saturn that appear to be visible in the sky for many months, Venus (and the other inner planet Mercury) appear in the west (at sunset) or in the east (at sunrise) for only a few weeks to a few months.

On the night of December 10, Venus joins Jupiter, Saturn, and the Moon in making a lovely sunset display as shown below.

December has two meteor showers to note: the Geminids and the Ursids. In any given year and under a moonless night, the Geminid meteor shower usually outperforms the much more famous Perseid shower in August. However, due to the cold temperatures and often cloudy skies of December, it is far less known.

This year, unfortunately, the Geminid meteor shower occurs near full moon, from which the light will block out the viewing of all but the very brightest Geminid meteors.

The Ursid meteor shower peaks on the night of December 21, but keep in mind that this is a fairly weak meteor shower, producing no more than 10 meteors per hour at best. This completes our review of the December skies…

Come back next month to learn about the calendar.