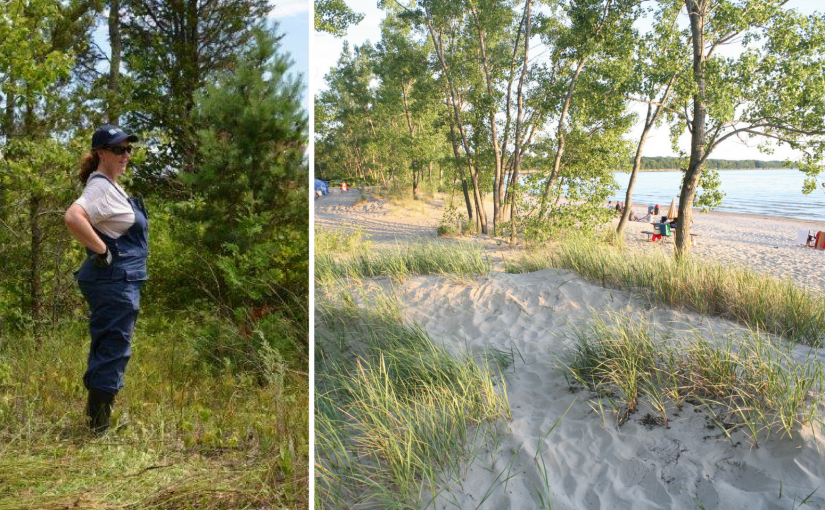 Yvette has given decades of dedicated, passionate service, protecting the ecological integrity of one of our busiest parks.

Being an ecological integrity superhero is a challenge in such a busy park.

Sandbanks is famous for its expansive sandy beaches, and the park welcomes hundreds of thousands of guests every summer. Yvette says that number keeps going up: “The very first year I worked here, we broke 324,00 visitors. This past summer, our latest record was over 700,000+, so in 30 years, we’ve doubled the visitation.”

As you can imagine, this much traffic can cause a lot of wear and tear on the park.

Yvette works hard to mitigate the impact on the environment.

Protector of the dunes

The West Lake Dunes are Yvette’s favourite part of the park, a sharp contrast to the bustle of the beaches. “It’s just another world in the heart of the dunes.”

The dunes are the reason Sandbanks has such beautiful beaches; they provide the fine sand. Originally, the sand was brought by glaciers. Since there are no more glaciers, this is a finite resource.

As Yvette explains, the beaches themselves are pretty resilient. There’s not much people can do to the beaches that a winter storm won’t do.

But the dunes are another story. “The dunes are very fragile,” Yvette explains. “People run up and down them, and destroy the vegetation. And it’s the vegetation that holds the dune together.”

And if the dunes are destroyed, the beaches won’t survive.

That’s why Yvette has dedicated years of time and effort to protect the dunes. Her team has erected fencing to help control natural (and human-induced) dune erosion, and direct traffic away from the most ecologically sensitive areas.

Yvette has also marshaled park staff to plant marram grass among the dunes. This vegetation helps catch and hold sand in place.

To ensure this restoration remains cost-effective and simple for staff, Yvette established a nursery area for marram grass within the park. Now, if the park need to replenish an area of dune, they transplant their homegrown marram grass at no cost and with no delay.

Yvette even finds ways to replace some of the lost sand. “Every spring we bulldoze the parking lot [behind the dunes], collecting sand that’s blown into the parking lot and putting it back on the beach.”

Yvette believes in finding balance between social, economic and environmental factors within parks. By protecting the dunes, Sandbanks is also protecting the beaches that are beloved by so many Ontarians.

“We [Sandbanks] are the beach – it’s what we’re known for, so looking after the environment of the park is also smart economically.”

And as Yvette points out: “There aren’t a lot of dune systems in the province. It’s important to protect the pockets we have.”

One of the biggest threats to Sandbanks natural ecosystems is invasive species.

Garlic mustard can outcompete wildflowers and even saplings and seedlings of trees. “You may think you have a healthy forest,” says Yvette, “but you have to watch carefully to make sure new trees are coming up beneath the canopy.”

Yvette and her teams have been battling garlic mustard for more than 20 years. It’s difficult to keep ahead of because the seeds remain viable for at least seven years in the soil. Garlic mustard is removed by hand, and invasive species removal is a common task for Sandbanks’ staff.

So will Sandbanks be pulling garlic mustard forever?

“Not forever,” says Yvette. “The hope is we plug away at it until something changes, some new measure is introduced.”

And that’s not as unlikely as it sounds. After all, Sandbanks has already defeated one invasive species during Yvette’s years of service…

Until recently, Sandbanks’ panne (a globally rare ecosystem) was threatened by purple loosestrife.

Park staff constantly removed this invasive species, much like they still do for garlic mustard and buckthorn.

A biological control was introduced in the form of a beetle and two species of weevil. The insects attack the leaves and roots of purple loosestrife. While the plant still grows, it can no longer crowd out native species and overpower the panne.

An ecosystem in balance.

Thanks to Yvette and the other park staff’s dilligent efforts to keep purple loosestrife at bay, the G20 panne ecosystems survived the invasion long enough for a control to be introduced. And the integrity of habitat was maintained.

The protection of the panne is one of Yvette’s proudest accomplishments.

“I’m really pleased with the outcome of the purple loosestrife,” says Yvette. “It really solidified in my mind that it’s worth doing this.

“Some days you pick invasive species for hours and it’s hard to feel you’ve made a difference. But we did. We saved that habitat.”

And, of course, a big part of Yvette’s focus is on education.

“I think education of visitors and staff is paramount to all the resource management,” she says. “Sandbanks is a natural environment classification of park, but it’s often looked at as a recreation class park, so stewardship is a word I use a lot.” Yvette Bree is a true asset to Ontario Parks. She’s overseen the planting of more than 100,000 trees in the past 10 years, diversifying Sandbanks’ forests. Treat her park with love.

“Most people just think of the beaches, but there’s so much more to it,” says Yvette. “I want people to appreciate just how unique and fragile Sandbanks Provincial Park is.”