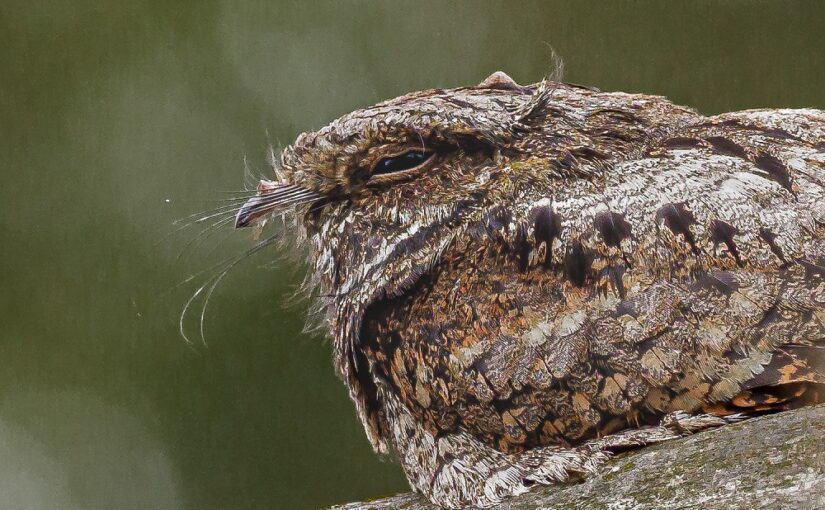 For some, it’s the song of summertime. For others, it’s the song that signals impending doom. It was part of what made Hank Williams (so) lonesome, but many consider its presence far too surrounding.

Despite your interpretation, it’s easy to learn this bird’s classic “WHUP-poor-WILL” song.

A highly camouflaged bird, active on warm summer nights, the Eastern Whip-poor-will is heard far more often than it is seen. Their distinctive onomatopoeic song is a mainstay in Pinery Provincial Park’s campgrounds.

However, the presence of the Eastern Whip-poor-will should not be taken for granted. Their songs are fading from our area.

Thankfully, with assistance from the Friends of Pinery Park and the Habitat Stewardship Program, Pinery is in a unique position to address this decline.

The bird certainly is noisy, reportedly singing up to fifty-nine times per minute, with singing bouts lasting upwards of fifteen minutes. For people trying to rest after a day in the park, noisy is a generous outlook.

“Cavern-mouth” seems unkind, but accurate. Whip-poor-wills forage at night, using their large, cavernous mouths to pick off insects on the wing. Their mouths are also bordered by bristly whiskers that may help detect the prey’s movement in front of them.

Feeding exclusively on insects, in the dark and unassisted by echolocation, whip-poor-wills use a combination of visual adaptations to forage effectively.

Their large, dark eyes gather available light, allowing them to see prey in low-light conditions. Some of the light is reflected to their retinas by a reflective membrane called a tapetum lucidum, which enhances night vision and creates a visible glowing orange eyeshine.

Ultimately, whip-poor-will feeding success is dependent on vision and requires open spaces. As a result, whip-poor-wills are often found feeding and nesting near the edges of wooded areas, loosely treed wetlands, and savannas.

Temagami Ojibwa tradition suggests that the song of the whip-poor-will brings misfortune to the listener. However, the growing absence of whip-poor-will songs in our area should be even more concerning to everyone.

The loss of suitable habitat, and the overall reduction of available insect prey are leading causes of Eastern Whip-poor-will declines. This species is classified as threatened in Ontario, with populations declining by roughly 2.7% per year.

The decline in southwestern Ontario is readily apparent. The conversion of the area to agriculture combined with the intensive use of broad-spectrum insecticides has pushed whip-poor-wills out of their previous haunts.

Now, whip-poor-wills in the region are restricted mostly to the few remaining tracts of natural space, including Pinery Provincial Park.

If we intend on securing this species’ place in southern Ontario, Pinery will need to find ways to accommodate and support the recovery of this at-risk population.

A light in the dark

The remaining suitable habitats, including Pinery’s oak savanna, are threatened by the spread of invasive plants, which can quickly dominate the savanna understory. In time, these invaders close the forest and reduce the open spaces whip-poor-wills require for foraging.

In response, the park has attempted to curb the spread of invasive plants through prescribed burning, direct plant removal, and the installation of boot-brushes at trailheads.

All this hard work appears to be paying off!

Over the last decade, whip-poor-will occupancy in the park has risen by roughly 3.2% per year. However, we can do more for our whip-poor-wills.

This program is administered by the Friends of Pinery Park. Together, our goal is to create habitat for species-at-risk, like the Eastern Whip-poor-will and many others, that require open forests to survive.

The Habitat Stewardship Program supplies additional assets used to create productive habitat. It focuses primarily on removing the park’s historic pine plantations, the creation of nesting habitat, and monitoring of species-at-risk within Pinery.

Through Pinery’s continued efforts and the Habitat Stewardship Program’s assistance, we are bringing light back to spaces too dark for whip-poor-wills to feed, nest, and thrive!

Long-term recovery requires suitable habitat, and Pinery is a key provider. Creating and maintaining these habitats is not easy, but a few simple actions can go a long way to protect these birds.

Visitors to Pinery can contribute to the recovery of whip-poor-wills in many ways:

First, limit the spread of invasive plants by using the boot-brushes found at the park trailheads and avoid going off-trail while hiking.

Not only will staying on trail limit the spread of invasives, but it prevents the disturbance of ground-nesting whip-poor-wills. Maintaining open habitats, whether insect havens like wetlands or nesting grounds like savanna, will help grow our whip-poor-will population.

Be conscientious of insecticide use. Select products that provide adequate and targeted protection for desired plants while maintaining the insect community.

If you observe singing whip-poor-wills during your visit, do not approach or bother them in any way.

Instead, report them to citizen science projects like eBird, iNaturalist, and NatureCounts, or directly to the Visitor’s Centre.

You may also consider donating to Ontario Parks, or becoming a member of the Friends of Pinery Park to support initiatives like the Habitat Stewardship Program that actively protect species-at-risk and their habitats.

Here at Pinery, the call of the whip-poor-will is a signal of our habitat management at work. It fills us with joy and pride.

Keep your ears open next time you visit the park. We hope you’ll hear their haunting call, and join us in helping protect this special species.