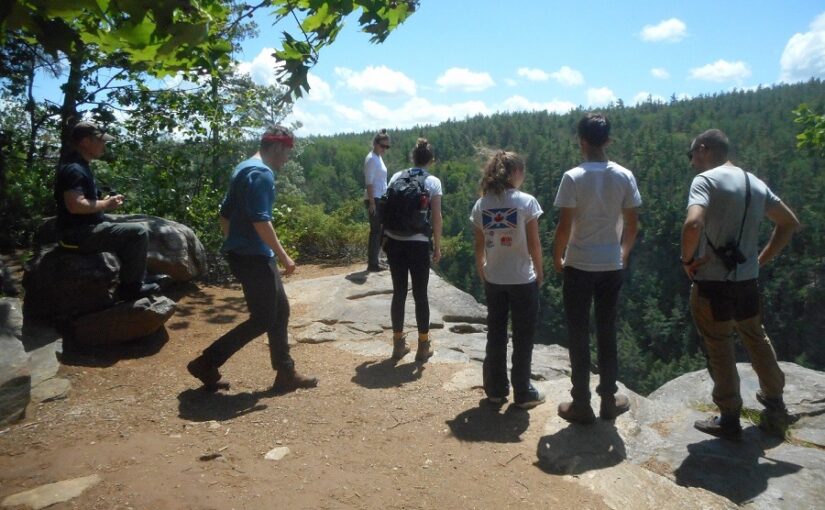 Today’s post comes from Park Naturalist Roger LaFontaine, a highly trained DROP specialist who aids in the retrieval of technology in distress or imminent danger.

With so many people coming to our amazing parks last year, social media was loaded with pictures. They took pictures of the landscape, wildlife, their families and friends, and themselves — lots of themselves.

And shortly after our spring visitors returned, we started getting the calls.

On average, they went something like this: “Hi, I was out with my family at X trail, and I got close to the edge of the cliff to take a selfie of our group. When I was trying to take the picture, I dropped my phone over the edge. Can someone come find it for us?”.

At the time, Ontario Parks didn’t have a specific cell phone recovery plan in place, but by the July long weekend, the first ever Device Recovery Ontario Parks (DROP) Unit was established at Algonquin Provincial Park.

That first week, the unit — consisting of myself and fellow naturalist Brent Travers — recovered 11 phones, 2 digital cameras, and one Super 8 camera (the camera was destroyed, but we safely recovered the film!).

There was such widespread device dropping in parks, we were asked to lead seminars and training sessions on how to establish and equip similar units in other parks.

By Labour Day, there were six additional parks with DROP units at the ready, and some of these even made trips to other parks.

Usually, we arrive on scene to find the distraught visitor. They give us a description of their device (make, model, case colour, distinguishing cracks in the screen protector, ringtone, etc.) and where they last saw it, and then we devise a plan to recover it.

Depending on the location, we may even bring climbing gear to rappel down the cliff face. We usually keep snorkelling gear in the truck too, as we have had a number of aquatic recoveries as well, although the devices are tragically not usually in working order anymore. We’ve even had to invent our own tools for some of these retrievals.

The calls from the backcountry are particularly hard, as getting to these remote lakes is difficult, and sometimes we need to be flown in.

The reason we do this is two-fold.

Obviously reuniting people with their devices quickly reduces stress and panic form being without it, and they can get their selfies with the cool filters onto social media ASAP.

The other, most important reason is for ecological integrity.

Electronic waste is a serious problem, and the plastics, batteries, minerals, and metals found in phones can be rather harmful to natural environments.

It’s even worse when they’re in the water, so please keep an extra tight grip on your devices around our lakes and rivers. (We’ve also noticed when recovering phones from the lakes a disappointing number of bottles, fishing gear, and other garbage in the lakes. Remember to pack out what you pack in, and don’t leave garbage behind!)

That is a ridiculous amount of potential e-waste, not to mention the regular garbage produced in parks.

We recovered most of the devices we were called out for, but some are lost. Future archaeologists and historians will try to piece together the lives of our visitors based on their phones and cases.

Some devices land in very hard to reach places. For 2021, we are working on getting a specially trained service animal that can fit into tight places.

Brent’s top choice is American Marten, as they can climb trees, enter small crevices, and can swim if need be.

No one has yet to train a marten, but Brent says he’s up to the challenge. (I don’t think he is, and besides, there is a very poor record for service weasels.)

There is a report of a Common Raven at Kap-Kig-Iwan Provincial Park that collected a cell phone from the base of the falls.

The report does say the phone case was bedazzled, and ravens do like shiny objects. It is unknown whether they will collect non-shiny phones. I will check a few raven nests for phones this spring.

The search for a team member continues.

In the end, we want people to enjoy our protected areas, but we need them to be careful with their personal items.

Litter in all its forms is not acceptable, and neither is e-waste.

Accidents happen, but unsafe selfies can be downright bad for the environment, as well as dangerous for the photographer.

Help us disband the DROP Unit for the 2021 season by keeping a tight grip on your devices and careful eye on your surroundings.