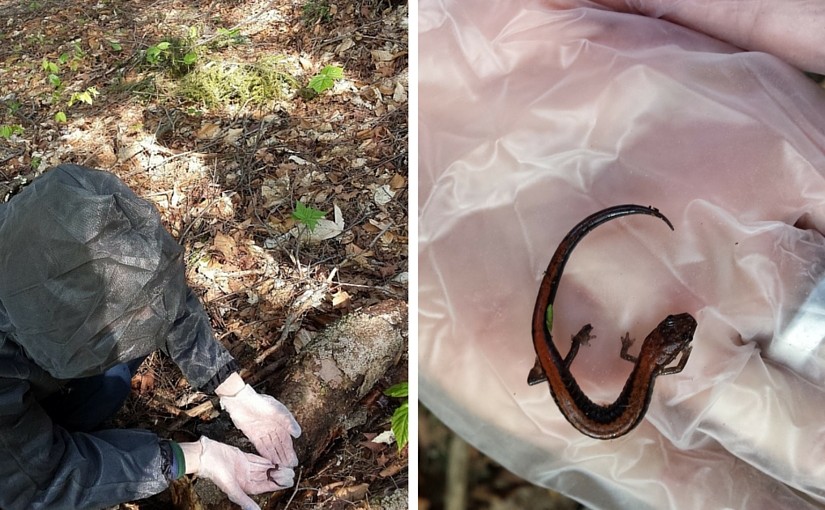 Across Ontario, our provincial parks protect a wide range of diverse ecosystems and habitats from human impact, urban development and other environmental threats.

However, this protected land is not immune to invasive species. These are non-native species that have been introduced (either purposely or accidentally) and have negative effects on a region.

At Bon Echo, the latest invasive species to be found is the insect-fungus combination responsible for beech bark disease.

What is beech bark disease?

Beech bark disease is an insect-fungus complex that was brought from Europe to North America in the 1890s. The disease is caused by the beech scale insect and a canker fungus that feed on the bark of the tree, enter the through these feeding wounds, and eventually spread to infect and kill the inner wood of the tree. While a tree infected with beech bark disease may look healthy from the outside, the inside of the tree is often rotting away – creating the potential for the tree to fall unexpectedly.

Beech bark disease and its impact on Bon Echo’s forest

The Hardwood Hill campground at Bon Echo has a high density of beech trees, and is unfortunately a prime location for the beech scale and canker fungus to live. Since the discovery of beech bark disease at Bon Echo in 2009, close to 300 hazardous trees have been cut down – trees near roadways, campsites and washroom facilities. Trees infected with beech bark disease that are located farther away from public activity have been left standing to preserve the integrity of the forest for as long as possible.

Though it’s unfortunate that many beech trees have been cut down in the park, they will not go to waste.

Most of the felled beech trees have been left on the forest floor, serving a new purpose. As these dead trees break down, they become a great habitat for many species of insects, slugs, fungi, moss and salamanders. This spring, park staff at Bon Echo went to inspect a number of beech trees in Hardwood Hill that were cut down a year earlier.

Underneath these decomposing logs, was a wide array of creatures thriving in the cool, damp conditions – including eastern red-backed salamanders! One of the aims of Ontario Parks is to preserve the ecosystems in Ontario by keeping the areas within our parks as natural as possible. If an ecosystem is in a balanced, sustainable state that is characteristic of its natural environment, it has ecological integrity. Since the insect and fungus causing beech bark disease were brought to Ontario by humans, it is impossible to achieve complete ecological integrity in an infected area such as Hardwood Hill. Nevertheless, park staff at Bon Echo are always doing everything we can to best preserve (or in this case, create) habitats for Ontario’s native species, keeping our parks as healthy, balanced, and natural as possible.

If you’re curious about what we’re doing to preserve ecosystems or control invasive species in a park, ask an Ontario Parks staff member on your next visit! Meanwhile, here are some ideas for how YOU can help.