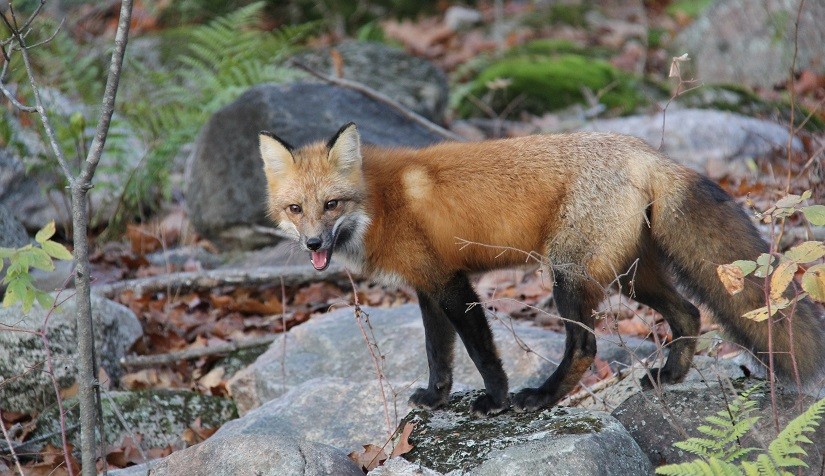 Today, we want to share an important message about how we can keep our foxes (and other wild creatures) safe.

Foxes are extremely intelligent, able to multitask and quickly clue in to patterns. They remember where they found food, and will return to that spot to search for more.

But sometimes, foxes are too clever for their own good.

This is the case for a pair of foxes living in one of our parks. This duo has become a familiar sight to visitors, and we believe this same pair has occupied their territory for nearly a decade.

Foxes typically relocate their dens seasonally, moving their homebase in reaction to food sources or threats.

But over the past few years, this pair has stayed put. Their choice of home seems unusual. It’s close to a busy road– a big risk factor for foxes. While the adult foxes have managed to avoid being hit, many of their kits have not been so lucky.

So why does this pair of foxes continue to hang out so close to the road?

Because park visitors are feeding them

It’s not unusual for our park rangers to see a crowd of nature-lovers and photographers visiting the foxes.

Some hold out food to tempt the foxes out to the road. Others edge too close, eager to snap the perfect picture.

These are things that — deep down — we all know we aren’t supposed to do.

Folks: this has to stop.

We’re animal lovers too. We know how exhilarating wildlife encounters can be. We understand how badly you want that perfect photo.

But this behaviour is hurting the foxes.

These foxes are HABITUATED. Habituation happens when an animal is exposed to a stimulus so many times, it loses sensitivity or stops viewing the stimulus as a threat.

A typical fox would view humans as a threat.

But because of their long-term exposure, these foxes no longer fear humans or vehicles. They live too close to the road, actually trotting out to approach cars.

Here’s why this is bad news for our foxes:

Roads are extremely dangerous to wildlife

Encouraging a wild creature to live beside a busy road is cruel.

At the park in question, foxes — especially the younger ones — are common roadway casualties.

Roads are dangerous for people too

When cars pull off a road or highway to interact with wildlife, there’s an increased risk of an accident.

And even if your “treat” fits their diet, encouraging these foxes to rely on humans for food is doing your new friends a disservice.

Remember: foxes are opportunists. They’ll take food if it’s offered, but they’re perfectly capable of finding their own. They don’t need our help.

Foxes are predators, meaning they’re prey-driven. Do you really want to hold out “prey” in your bare hand? Animal bites are painful, and wild creatures can carry disease.

And the risk isn’t only to the human. In the case of a wildlife bite, the animal may need to be destroyed.

Taking the perfect photograph isn’t worth risking the fox’s life.

Feeding predators is ESPECIALLY bad for an ecosystem

In a typical ecosystem, predators tend to have the smallest populations. For example, in a 100-hectare area, there might be up to 10,000 small mammals, but only a single fox.

At the park in question, our human-fed foxes have developed increased body weight. Because of this, the mother fox often produces an above-average litter of kits, adding more predators to the area.

Removing or adding even one predator to an area can have a big effect on other wildlife. Here’s an example:

Foxes enjoy digging up turtle nests and eating the eggs. A single fox might find the majority of turtle nests, but leave a reasonable percentage of turtle eggs to hatch. But enticing even one more fox to an area might mean that even fewer turtles hatch hastening potential population declines (most of Ontario’s turtles are already on the Species At Risk list).

Predators and prey usually balance each other out on a landscape, but the balance is easily disrupted when we feed predators. With extra food from us, their numbers can increase and become artificially high, potentially outstripping their supply of natural foods.

Just remember: there is a cost to feeding wildlife

A cost to the animal, a cost to the ecosystem, and — if you are caught by a park staff – a cost to you as well. Feeding wildlife is against the law in Ontario Parks.

Read more about the risks of feeding wildlife here.

Wait…so should I never try to watch wildlife?

Not at all. We all love those magical moments where we spot a wild creature in its natural habitat.

And some animals, including the fox, are occasionally curious about us too.

But there’s a big difference between quietly observing a wild animal, and encouraging it to change its natural behaviour.

So if you come across a wild creature in the parks:

Next time you spot a wild creature, just stay still and silent. Savour your encounter and show respect for your fellow creatures.