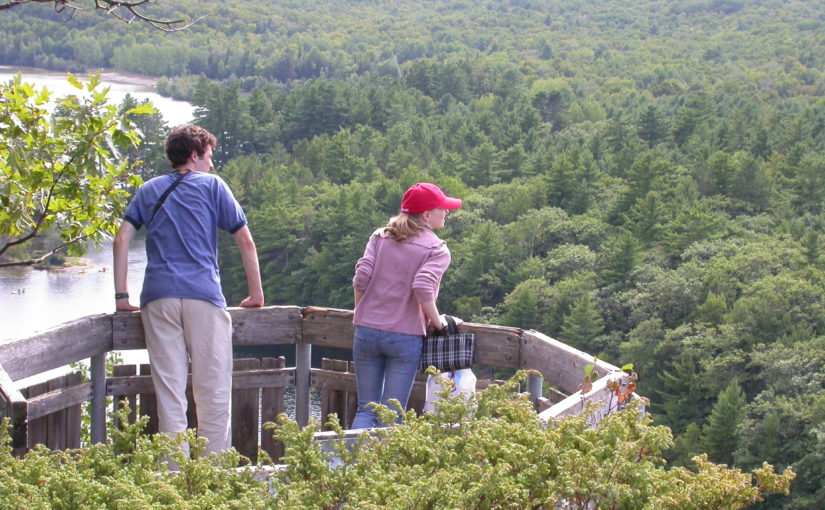 In our “Behind the Scenes” series, Discovery Program staff across the province share a “backstage” glimpse of their favourite programs and projects. Today’s post comes from David Bree, Discovery Program Lead at Presqu’ile Provincial Park.

Trails and parks go together like (fill in your favourite pairing here: “like peas and carrots,” as Forrest Gump would say). Trails are arguably the most used recreational facility in our park system.

But trails don’t just happen; first a concept must be born.

Where do we want a trail and why?

Often a trail is conceived to allow visitors to experience a special park feature.

The Spruce Bog Boardwalk in Algonquin Provincial Park or the Marsh Boardwalk Trail at Presqu’ile Provincial Park are obvious examples of a trail giving access to habitats that would be difficult and/or damaging to explore any other way.

Then it must be built, monitored, maintained, and sometimes closed and decommissioned. All stages take work, and depending on the park, it could be the superintendent, maintenance foreman, operations technician, or warden (or more likely a combination of all) doing this work.

In my 31 years in Ontario Parks as Discovery Staff, I have been involved in all aspects of a trail’s life.

Being we’re knowledgeable of the park’s flora and fauna, it’s natural to have Discovery Staff on the ground floor of a trail’s birth.

What feature of the park are we missing in our trail system? Where can we set the trail so that it showcases features with the smallest ecological impact possible? These are important questions that Discovery Staff may have answers for.

To be honest, the opportunity to work on this aspect of a trail’s life doesn’t come along that often. I’ve only been involved a couple of times in trail design. Even with 31 years in parks, all the parks I’ve worked in are even older, and had well-developed trail systems in place when I arrived. But trail design has often fallen to park naturalists in the past.

In a recent conversation with Bud Guertin, Presqu’ile’s first Naturalist in 1957, he told me that one of their first jobs was to lay out trails. They did four that summer, two of which are still part of our trail system today.

To interpret or not; that is the question

In the mind of Discovery Staff there are only two types of trails: interpretive and non-interpretive. The only difference is that the interpretive trail has self-use material associated with it that allows the visitor to gain a greater appreciation of what is found along the way. These have traditionally been either a trail guide you carry with you, or panels you read along the way.

I say “traditionally” because there are innovative trails out there that incorporate touch and sound, and new technologies allow educational material to be directly accessed by your mobile phone.

However it is done, you can be assured that a Discovery naturalist or historian has painstakingly researched, written (draft after draft), and designed each guide or panel, then worked with a printer or fabricator, checking proof after proof, to get to the finished product.

I have been involved with interpretive guides for the Cliff Top Trail at Bon Echo, the trail at Peter’s Woods, and panels along the Marsh Boardwalk at Presqu’ile, among others. These have been some of the biggest and most rewarding projects in my career.

Things change, and so will the signs

Nature changes, and another aspect of trail work is monitoring the trail for those changes. At the beginning of the season, I walk the interpretive trails at Presqu’ile to make sure all the panels and posts are still standing and what has been written at each stop is still valid.

A stop describing a Yellow Birch growing out of a nursery stump that fell down two years ago is not very effective interpretation.

Monitoring — picking up garbage, clearing the trail and identifying damage or hazards that need fixing — is ongoing through the year. Sometimes I can fix it, and sometimes I pass the job on to more skilled members of our maintenance team.

I also note trail conditions, what birds are nesting, what is flowering, and how bad the blood-sucking insects are.

This information is often needed to answer the many questions I get about what is happening in the park, as well as useful material for social media posts. I also keep an eye out for invasive species that need to be removed before they get out of control.

(Okay, I admit that most times monitoring park trails falls under the “I can’t believe I get paid for this” category and is one of my favourite parts of the job, but it all needs doing.)

Occasionally, a trail needs to be closed or re-routed.  Perhaps a sensitive species has been discovered along a trail, maintenance requirements become too high, or new information suggests a new trail would be more effective at telling the story.

Happily, I have only been involved in the closing of a couple of park trails, all for environmental reasons.

One was to stop erosion along a waterway at Bon Echo. That job required posting signs and filling in the old trail with load after load of cut brush. People get very attached to their trails and don’t want to give them up!

Trails have certainly been part of my life in parks, and I believe they are an integral part of the park experience for most visitors. Trails, like all things, have a life from beginning to end. Some are long, some are short, some interpretive, some not, but you can be assured that Ontario Parks Discovery staff are involved with a trail’s journey, every step of the way.