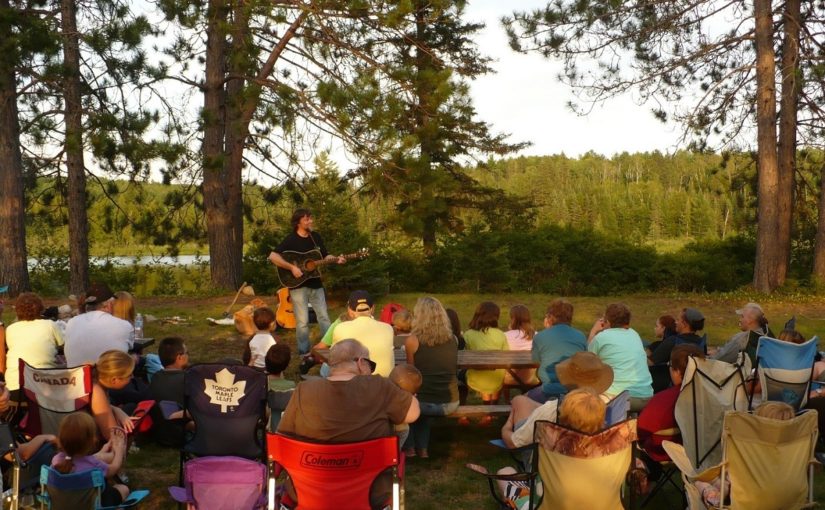 As a part of our 125th anniversary, Ontario Parks is excited to announce a province-wide, 30-park concert tour featuring singer-songwriter David Archibald!

David will be performing five brand new songs this summer that he has written in celebration of the anniversary!

David’s upbeat and interactive performances in provincial and national parks celebrate the vast diversity of Canadian cultural and natural history.  In his career, he has performed for more than 40,000 park visitors. David has also written for and performed on Sesame Street in New York and CBC’s Mr. Dressup.

David’s musicals have been professionally produced across the country.  He has won awards for his song-writing workshops and musical direction.

We asked David to share his thoughts on this year’s concert tour:

“Should I bring my P.A. system?” I asked the nice park employee.

It was Bon Echo Provincial Park’s 25th anniversary. It was 1989. I had been asked to write a song for the grand celebration. I would present it at the park’s lovely amphitheater. Exciting times.  New song. Big occasion. My first performance in a provincial park.

Well, it all went fine — although it was almost an “unplugged” affair as the speakers referred to earlier were the tiny light-green ones clipped on the side of the park’s Bell & Howell movie projector.

I had no idea that I would spend a good portion of the next 30 summers performing across the province, singing in amphitheaters and picnic shelters, sleeping in my trusty blue tent. What really got the ball rolling was 1993’s “Jim & Dave’s Awesome SuperNatural Camping Adventure” written and performed with my musical friend James Gordon to celebrate Ontario Parks’ centennial. Now, 25 years later, I’m thrilled to embark on this grand tour of 30 parks to help celebrate the 125th anniversary of Ontario Parks. It’s a fantastic job! I will unleash five new songs including “The Happiest Camper in Ontario,” as well as return to old favourites such as “Five Great Lakes,” “Poison Ivy,” and “The Ballad of Pirate Bill.”

Ontario’s vast network of provincial parks is unparalleled in beauty and diversity, and I’m proud to be part of this summer’s festivities. See you at the amphitheater!

Don’t miss David Archibald’s The Happiest Camper in Ontario Tour at a park near you this summer!