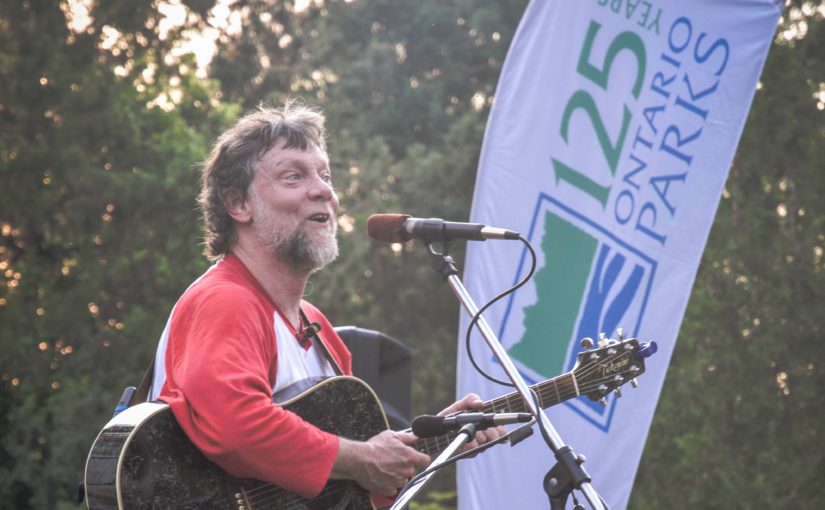 Named after one of the five new songs that David Archibald wrote specifically for the anniversary, the concert tour was called The Happiest Camper in Ontario Tour. From June until September, David Archibald sang his way to all corners of the province, performing for 3,500+ park visitors.

Often leaving audiences with a song they can’t get out of their head, David’s concerts are upbeat, interactive, and engaging.

One of David’s new songs is “Living the Dream Time (More Green Time Less Screen Time)”. This catchy song was written to celebrate the theme of the 125th anniversary: Healthy Parks Healthy People.

The song encourages people to get outside to experience the positive benefits ofspending time in nature.

Here’s what some concert attendees had to say in David’s online guestbook: “A great evening of entertainment tonight with my daughters at MacGregor Point. Thank you for dropping in to share your love of music and joy of living. Thanks also for signing a CD for my nephew’s birthday. I hope to see you again one day soon.” — Blair

A concert tour to remember Ontario Parks checked in with David Archibald after his tour across the province to see if he was still in fact the happiest camper in Ontario.

Here’s what he had to say:

“Just received a note from a camping father. Subject line read, ‘Everybody we’re camping out tonight’ (a song written for OP125). ‘David, saw you in Killbear — my kids haven’t stopped singing this song where can I get it so I can play it around the campfire?’

“Well, that’s the kind of response you like to get after a remarkable summer crisscrossing this vast and wonderful province. This was no ordinary road trip, however. I had the privilege of performing at 31 provincial parks from Rushing River in the northwest, to Rondeau in the southwest, to Charleston Lake in the east.

“It was a summer of osprey, eagle, flicker and lynx. A summer of swimming and sweating (not in that order). A summer of sleeping on the sand, sleeping on the granite, sleeping beneath Venus, Jupiter, Saturn and Mars – wait a minute, that sounds like a lot of sleeping! Mainly, for me, it was a summer of music – singing songs about parks in parks — in beautiful outdoor amphitheaters, in picnic shelters in the rain, on the bare and ancient rocks of the Canadian Shield. “In addition to the wildlife, I’ll also remember the human connections and the increasing diversity of the camping population whether it was rain-soaked geologists at Kakabeka or hordes of War of 1812 re-enactors at Wasaga Beach. “It was terrific to see old friends and families who have been camping and coming to my concerts for years.  They know all the words to songs like ‘Five Great Lakes’ and ‘The Poison Ivy Song.’ It was also a pleasure to meet so many families new to camping and spending a ‘little more green time and a little less screen time!’

“So, now it’s fall. I miss the wind and the waves and the lonesome sounds of loons and trains in the distance. I’m very grateful to Ontario Parks for making this adventure possible. Until next time!”

If you just can’t get enough of David’s new songs, they can be found on his website!

A big thank-you to David Archibald for an amazing concert tour and to everyone who came out to enjoy his concerts this summer!