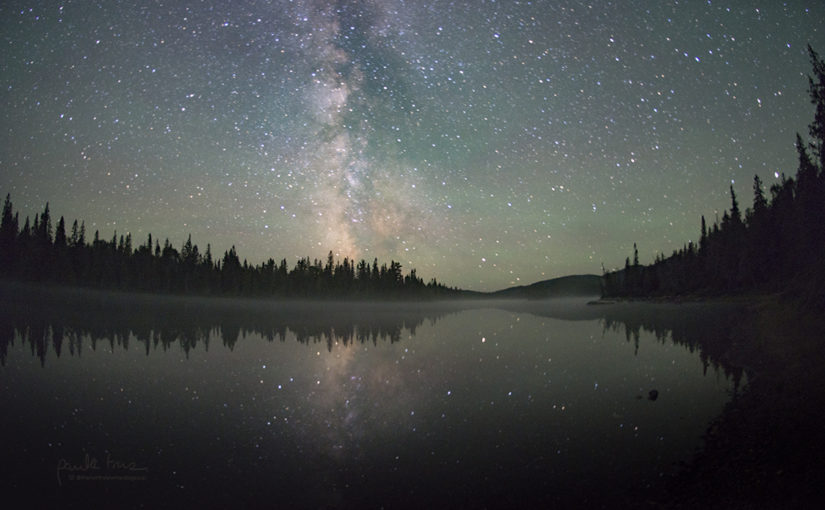 As the sun sets, the stars begin to appear. Like old friends, their familiar glow brings us home no matter how far away our house may be. Our friendly acquaintances, the constellations, trace their way across the sky. The white glow of the Milky Way emerges slowly to drown out its fainter neighbours.

Far away from the light pollution of major cities, Lake Superior Provincial Park’s night sky is one of the darkest in North America.

Navigating by the night sky

The night sky is an instrumental human connection. The faint shapes of constellations hold the innumerable stories of many cultures. In the millennia before GPS, our ancestors used the stars to navigate. Before compasses, the trusty North Star guided their way.

There’s also something fundamentally grounding in looking up at the night sky and knowing that anyone else looking up can see that exact same bit of sky. Since the night sky is so incredibly vast, we can see the same stars on either side of Canada. While they rise and set at different times, the stars are still the same.

Sometimes if I get homesick while camping, I’ll check my star charts to see which star is directly over top of my house. I know that if I kept on walking, eventually I’d make it home.

Wildlife and the night sky

The night sky is infinitely more valuable to the wildlife who claim the night as their own.

Birds, such as the Indigo Bunting, use the night sky to navigate. Nocturnal animals, such as the Northern Flying Squirrel and bats, rely on the preservation of darkness in order to avoid predators. Insects, such as moths, tend to congregate towards light sources, which disturbs their life cycle. It often proves deadly as the concentration of insects in lighted regions makes them easier pickings for birds and animals

Scotobiology is the study of the relationship between wildlife and the night.

Can you picture the night sky over your campsite?

Preserving the night sky is an important part of preserving our biological diversity, cultural history and camping experience.

In 2016, Jeffrey Deans, Outreach Coordinator of the Algoma Astronomers, initiated an application to the Royal Astronomical Society of Canada (RASC) to have Lake Provincial Park designated as a Dark Sky Preserve. Letters of support for the application were received from the Town of Wawa and the Friends of Lake Superior Park.

On July 17, 2018, Lake Superior Provincial Park was officially designated as a nationally certified Dark Sky Preserve by the Royal Astronomical Society of Canada, becoming our second provincial park to receive this prestigious designation.

Then began the process of “light measurement.” The first step of becoming a dark sky preserve is figuring out how dark your sky actually is.

We couldn’t have done it without the help of our volunteers. We can’t thank noted photographer Paula Trus enough for aiding us in taking Sky Quality Measurements (SQM) readings. The SQM readings were made using a Unihedron Sky Quality Meter on a scale from very bright (one) to very, very dark (23). The average reading for Lake Superior Provincial Park was 21.69 mag/arcsec² with readings of 21.68 mag/arcsec2 at the Agawa Bay beach and 21.46 mag/arcsec2 at the Rabbit Blanket Campground.

For comparison, in downtown Toronto you could probably measure roughly 17.00 mag/arcsec2 and at sunrise or sunset, the sky directly over your head measures around 7.00 mag/arcsec2.

The east side of the park is buffered by minimally accessible crown land. To the west lies the indomitable waters of Lake Superior.

To the south, the only notable light pollution comes from the small town, hydro dam and windmills at Montreal River Harbour, but even then, there is a 2 km buffer zone of crown land. This buffer zone ensures that our night sky experiences minimal effects from light pollution outside of the park.

With next to no exterior sources of light pollution and measurements showing how extremely dark our sky was, we began looking at our park’s light fixtures. Most notably on the park gatehouses and comfort stations.

Light pollution comes in many forms and some are worse than others. To comply with the RASC’s dark sky guidelines, we began changing our bulbs and adding filters to remove blue light wavelengths from our light bulbs. This was necessary to enhance our dark sky potential because blue light emulates the day and removes our night vision.

Have you ever wandered around at night without a flashlight?

At first, you can’t see a thing. Yet over the next 20 minutes, your eyes slowly adjust to the darkness of the night. Yet if we shine our flashlight again, we go right back to not being able to see a thing.

This problem can be avoided if you use a red-light flashlight, as red light does not interfere with our night vision. Blue light also messes with our melatonin levels, since our mind will begin to think it’s daytime. The same thing happens to the wildlife around us.

An inventory of all artificial lights in the park was done to see if they complied with the requirements of the Dark Sky Preserve designation. The vast majority of existing lights had to be changed to filter out the blue light or covered with a filter to reduce light spill.

As Discovery staff, our main role with the Dark Sky Preserve now lies ahead. We helped supply information for the application and had numerous adventures attempting to measure our florescent light bulbs. During my first night at the park, I looked up at the night sky and fell over because of how many stars I could see! In 2017, as we changed the light bulbs, I began to notice a significant difference in the campground. Suddenly I could stroll through the campground at night without the use of an artificial light.

On the first night after we had changed all our light bulbs, I was doing a presentation at the amphitheater on constellation stories. As night settled, a few campers pointed out a small figure swooping over the audience. It was a Northern Flying Squirrel.

As we move forward as a designated Dark Sky Preserve, our Discovery team is planning to offer significantly more programs relating to the night sky here at the park. We hope to share and discover more of the rich cultural history associated with the night sky.

Hopefully, our road to becoming a dark sky preserve inspires others to reduce their own light pollution at home.