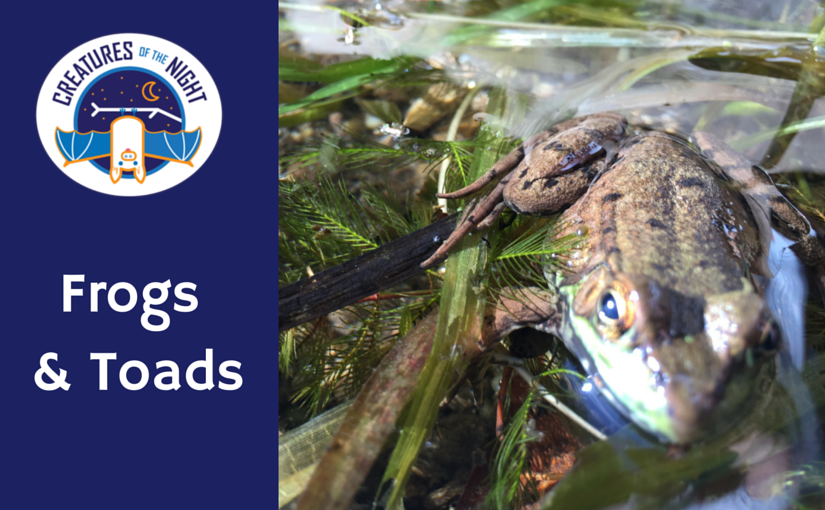 Frogs and toads have an ancient history, with fossils dating back to the time of the dinosaurs.

Algonquin Provincial Park Naturalist David LeGros has been fascinated by these amphibians since he was a toddler and he shares some fun facts about them.

What’s the difference between frogs and toads?

There are thirteen different types of frogs and toads in Ontario. Both are amphibians – which means they are cold blooded, reproduce in water and have permeable skin – and they’re very similar. In fact, toads are really a kind of frog.

But while frogs have moist, slimy skin and generally live most of their lives in or near water, toads have dry, warty skin and spend most of their time on land. Toads are what you’ll find in your garden. And, no, you won’t get warts from touching them!

Frogs and toads are solitary

For the most part, frogs and toads travel through life alone. The only time they get together is in early spring and then only long enough to mate. That croaking sound you hear at twilight is the male calling out to attract the female and draw her in.

Frogs and toads breed by way of external fertilization. The female lays her eggs in or on the water, either in a long string or a cluster, and the male fertilizes them. Then the male and female go their separate ways, leaving the embryos to develop into fish-like tadpoles and finally into baby frogs or toads. This process is called metamorphosis.

Frogs and toads are most active at night

Frogs and toads quickly lose moisture through their skin, so they need to be careful in the sun – drying out can be quite dangerous. By day, they sit in sheltered places. At night, they become active, patiently waiting to ambush a passing insect or other prey. When one comes by, they flick out their long, sticky tongues, and in a flash, snatch it!

Frogs and toads make good meals for birds of prey, snakes and many mammals. Their best defence is being well camouflaged, but if that fails, they can quickly leap away from danger.

Tadpoles feed on micro plants and algae, but when they reach adulthood, frogs and toads become carnivores and eat mainly insects and invertebrates. Some frogs will devour small birds and mammals, fish and snakes – pretty well anything that moves and fits in their mouth!

Frogs and toads don’t chew their food. They swallow their prey whole. They use their hands and eyeballs to push it down their throat to their stomach. That’s why it looks like they’re blinking when they’re eating!

Frogs and toads sleep the winter away

As the temperature starts to drop, their metabolism slows down and they head off to hibernate until April or May. Some, like the American toad, burrow into the ground. Others, like the bullfrog, go under water to sleep at the bottom of ponds, lakes or rivers. And a few, like the gray tree frog and the wood frog, hibernate under leaves or logs or in rock crevices in the forest.

The wood frog actually freezes in the winter. Its breathing and heartbeat stop, but because the water in its cells is replaced with glucose, its organs and muscles aren’t damaged. In the spring, when the earth’s temperature rises, the wood frog thaws and hops off!

Because they need both aquatic and terrestrial habitats to complete their life cycle and have very sensitive skin that absorbs pollutants, frogs and toads are good indicators of how healthy the environment is.

If you want to get involved and help contribute to our knowledge about these fascinating amphibians, take part in FrogWatch Ontario.

There are two levels of frog watchers, and whichever you choose, you’ll be helping scientists identify population trends and track climate change!