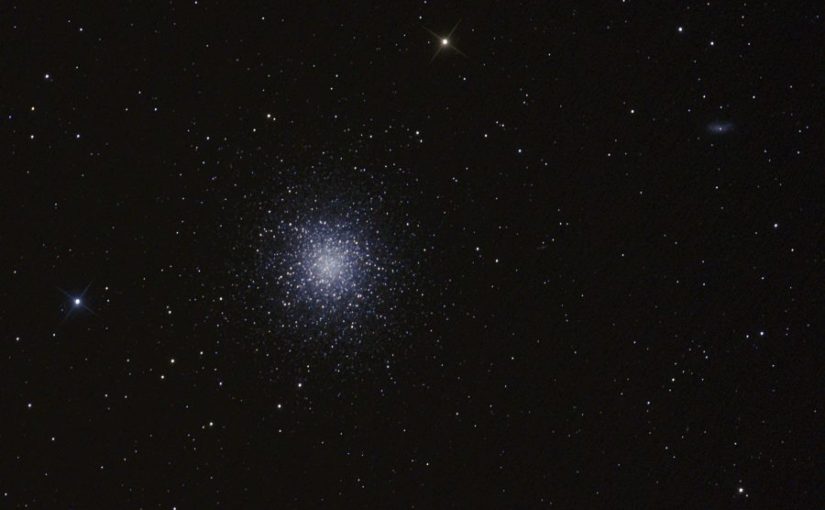 In last month’s constellation post, we featured Boötes the Herdsman, Virgo the Maiden and Libra the Scales.

This month, we will discuss the constellations of Hercules, Ophiuchus and Serpens. Those within the medical discipline are very familiar with the symbol that has come to represent their craft: a staff surrounded by two serpents coiling up its length. This symbol — the caduceus — reminds us of the ancient Greek legend for the origin of modern day medicine.

A long time ago Asclepius, son of Apollo, met up with a serpent which he severely injured by beating it with his staff. Another serpent brought herbs and laid them atop the injured one, whereupon the injured serpent seemed to gather its strength and slithered off into the bushes with its friend. From this encounter, Asclepius was said to have learned the medicinal arts.

The constellation of Ophiuchus, the serpent bearer, represents the healer Asclepius.

But shouldn’t he have a serpent nearby? As a matter of fact, he does… Just below Serpens Caput is the globular star cluster M5. We’ll talk more about globular clusters below, in the section on M13.

Above both Ophiuchus and Serpens lies the famous hero of ancient Greco-Roman lore: Hercules (or Heracles in Greek).

The constellation of Hercules is ancient even by Greek standards. Two Greeks living almost 2,500 years ago, Eudoxus and Aratus, are largely responsible for the ancient Greeks learning about the far more ancient Sumerian/Babylonian constellations (these date back to between 3,000 to 4,000 years ago). There is evidence to suggest that the original Hercules constellation was not known by that name but was placed there by Eratosthenes about a hundred years after Aratus.

Hercules was the son of Zeus, but was negatively looked down upon by Zeus’ wife Hera, who tried to make her mortal step-son’s life difficult. To atone for his sins, Hercules undertook 12 “impossible” tasks (labours). During this time, the Oracle of Delphi renamed Hercules to Heracles meaning “glory of Hera.”

Four brighter stars make up a parallelogram known as “the keystone of Hercules.” Towards the top right is a beautiful object known as M13.

M13 is known as a globular star cluster, a cluster made up of hundreds of thousands of stars about 22,000 light years away.

Just to the west of Hercules is the lovely u-shaped pattern of Corona Borealis or the “Northern Crown.” This very distinctive pattern of stars was thought to be the crown that Dionysus gave the Cretan princess Ariadne as a wedding gift. After the wedding, Dionysus tossed it into the stars where the jewels shine today as stars in the sky.

Ready to angle your eyes at the skies?

Check our monthly astronomical highlights for a guided tour of this month’s night skies.