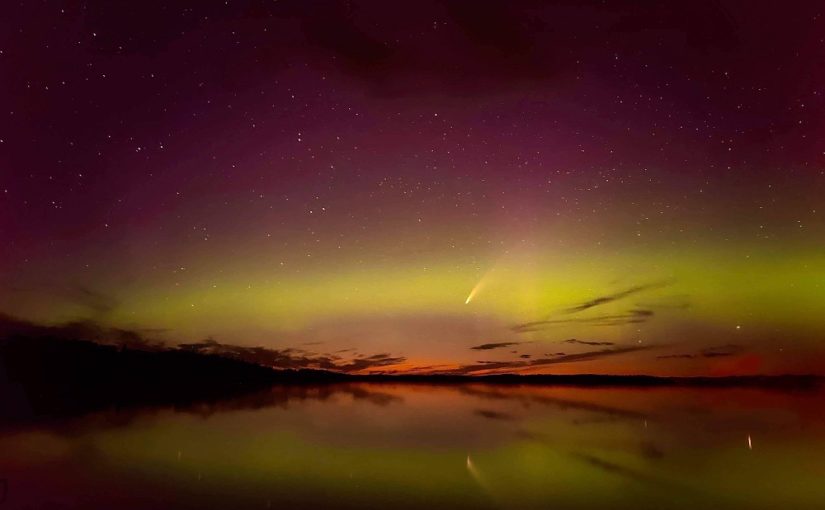 Our night sky seems to be a fixture of perfection.

While the stars rise and set, and the sun, moon and planets do appear to move against the starry backdrop, little other changes are apparent.

However, that stillness does get punctuated from time to time by ghostly interlopers — the comets!

And right now, our eyes are fixed on Comet NEOWISE!

So what is a comet?

A comet is a leftover from the formation of the solar system.

Usually no more than five to 10 kilometres in diameter, these “dirty snowballs” are composed of mostly ice and rock material.

As they near the inner part of the solar system, the sun’s heat begins to warm up the nucleus, and the materials sublimates (goes from a frozen state directly to gas without passing through a liquid phase).

In this picture, the nucleus of comet 67P/Chuyumov-Gerasimenko can be seen sublimating into gas jets that release icy and dusty material away from the nucleus itself.

While comet nuclei are quite small, the material left behind in the wake of the its journey can stretch back over 100 million kilometres.

Sunlight, reflecting off of this long chain of dust and gas, is visible as the comet’s tail.

In detailed photos (such as this one taken by Killarney Provincial Park astronomer in residence Bill Gardner), two different tails can be seen. The brightest is the “dust tail”  composed of (as you might expect) largely dust and gas.

It generally points away from the sun, but is also somewhat affected by the speed and direction of the comet’s travel, often appearing somewhat bent.

The ion tail tends to be blue in colour and always points directly away from the sun due to the effect of solar wind.

What happens to a comet after it passes by?

Most comets are in long orbits around the sun that can take them far beyond the dwarf planet Pluto. Some of these visitors may be on a one-time pass through our neck of the woods, never to be seen again.

It is estimated that Comet NEOWISE (C/2020 F3) will travel so far away from the sun that its next pass won’t be until the 89th century.

So see it now or you will have a very long wait ahead of you!

Interestingly, the dust that is left in the wake of the comet’s travels stays in orbit around the sun, following the same path that the comet did. Should Earth encounter this material, it will burn up in our atmosphere (and we call that a meteor).

So now you have the origin of the other item that we see that changes in our night sky — meteor showers. Comets are indeed the source for most of the meteor showers that we are privileged to see adorn the starry night sky, best enjoyed from our provincial parks.

There are many good sources and guides to help you find the comet. Here are a few found online:

While you can easily see the comet with the unaided eye in dark skies, binoculars are probably your best optical tool to enjoy some of the comet’s details.