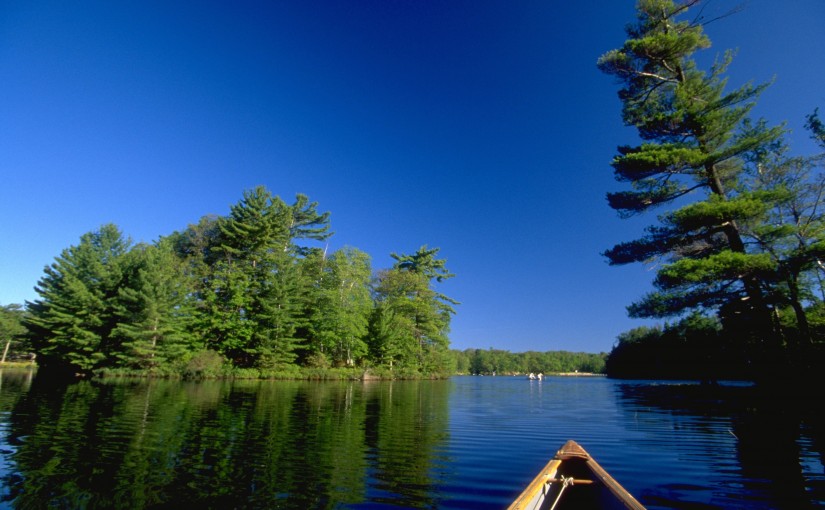 To celebrate, why not plan a history-themed journey that follows his route? These are a few of the (future) provincial parks Champlain paddled through four centuries ago!

The French River was designated as Canada’s first Canadian Heritage River for its outstanding natural, cultural and recreational values; the park has a Governor-General award-winning visitor centre, with an exhibit called “Voices of the River”, which takes visitors through time, focussing on the people who have lived and travelled on the French River, for the First Peoples like the Nipissing and Huron, to Samuel de Champlain, fur traders and voyageurs; a short trail leads from the Visitor Centre to a pedestrian bridge that crosses the French River Gorge, providing a spectacular view of the river, just as it was when Champlain canoed through 400 years ago.

Just inland from Georgian Bay, Six Mile Lake is connected to Georgian Bay by a canoe route that paddlers can do in a few days. The park makes a great base to explore all of the historic attractions of Huronia, including the 400th anniversary commemoration of Samuel de Champlain’s landing in Huronia.

When Champlain passed by 400 years ago, there were many significant rapids on the Ottawa River, making it a difficult journey. A number of hydro dams have raised water levels, creating long lakes in many sections of the river, and covering many of those portages. A historical plaque on the Ottawa River not far from Driftwood tells this story.

This park provides access to the waters of Georgian Bay and the northern part of the Thirty  Thousand Islands.

Jutting out into Champlain’s “Mer Douce” or “Sweetwater Sea” — which he named for its freshwater and huge size — Killbear is the perfect spot to sea just how big Georgian Bay/Lake Huron is. The park’s Lookout Point Trail and Lighthouse Point Trail provide expansive views of the Bay, and the park’s many beaches give visitors a chance to swim, paddle, or sail. The Visitor Centre interprets the ecology, geology and history of Killbear and the surrounding Georgian Bay coast.

The park contains part of the Thirty Thousand Islands and Georgian Bay coast, allowing canoeists and kayakers a chance to experience why Champlain named Georgian bay a sea.

Located along the Mattawa River, this park celebrates the history, not only of Champlain and his journey through this region, but also of his successors which include the colourful voyageurs. You can partake in the unique experience of paddling a voyageur canoe on one of the Park`s signature Voyageur Adventure Tours, offered daily throughout July and August.

This park is the location the Huron village Toanché, which is where Champlain landed upon his arrival in Huronia on August 1, 1615. The park includes many trails, Georgian Bay waterfront, and interpretive programs about the area’s cultural heritage. The park is a great base for exploring the regions many heritage attractions, including Rendez-vous Champlain in nearby Penetanguishene.

The Mattawa River provides visitors with many accessible opportunities to canoe part of Samuel de Champlain’s route. The Mattawa was Canada’s second river to be designated as a Canadian Heritage River and is an outstanding and scenic recreational river.

The list goes on, with many more Ontario Parks showing up on Champlain’s routes, including:

Which of Champlain’s routes will you retrace this year?