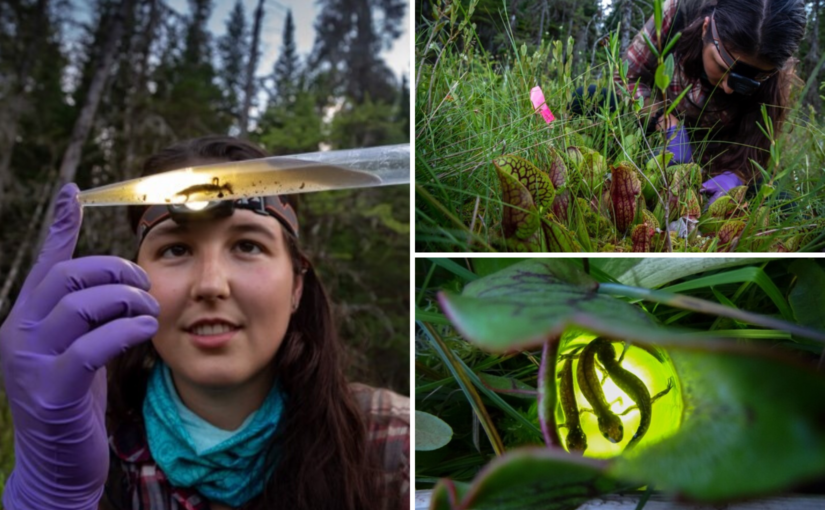 Today’s post comes from Samantha Stephens, a science and conservation photojournalist who spent this past summer in residence at the Algonquin Wildlife Research Station.

The excitement of discovery is a feeling everyone has experienced. Finding a new favourite hiking spot or adding a “lifer” to your birding list are some familiar examples for nature lovers.

For a naturalist, the most thrilling of discoveries comes from observing well-known species interact in a way that hasn’t been documented before.

That’s what happened to Patrick Moldowan, a PhD student from the University of Toronto who leads a long-term study of spotted salamanders in Algonquin Provincial Park.

And that’s what led him to be a part of discovering that carnivorous plants are eating baby salamanders.

Did you say “carnivorous plants”!?

However, bogs are nutrient-poor environments, and so Pitcher Plants that grow in this habitat have evolved a strategy to supplement their diet. They’ve become carnivorous, meaning that they dine on the flesh of animals. These plants have specialized bell-shaped leaves that form “pitchers” capable of collecting rainwater, into which they excrete digestive juices. These liquid-filled pitchers attract invertebrate insects, such as flies, moths, and wasps.

The insects become trapped in the pitcher and are subsequently broken down by a combination of the digestive juices and microorganisms living in the rainwater.

But these plants are eating more than insects

In 2017 and 2018, undergraduate students and instructors working on ecology projects as part of a field biology course were surveying Pitcher Plants intending to document the invertebrate prey.

Much to their surprise, they found more than just insects.

Trapped and swimming around inside the pitcher was a baby Spotted Salamander!

These observations intrigued Patrick and field course instructor Dr. Alex Smith, and led them to look into the phenomenon further. Subsequent surveys found salamanders trapped in 1 in 5 plants!

These observations were published in a paper that came out this past spring (2019), and the remarkable discovery has since received international attention.

The essential role of salamanders expands

Salamanders spend most of their life underground, or beneath cover objects on the forest floor such as rocks and logs, and so they are rarely seen by hikers.

But don’t mistake this hidden presence to mean that they are rare; in reality the abundance of salamanders in the forest ecosystem can outweigh that of other animal groups, such as birds and mammals.

And they have a very important role to play.

In the spring, cold rains stir adult salamanders from underground over-wintering sites and provides the perfect conditions for them to make the journey to vernal pools, ponds or lakes, where they mate and deposit jelly-like egg masses. Once this task is completed, they will travel from these water bodies back to the forest.

Throughout the summer, the egg masses that they have left behind will develop into aquatic tadpole-like larvae and then in the fall will transform again, this time into terrestrial juvenile salamanders. These “metamorphs” can weigh as little as 0.3 g and be as small as 3 cm in length.

These young, tiny salamanders must travel from these aquatic hatching grounds to find cover underground for the winter. It is at this stage that the salamanders may have to traverse a bog mat, where Pitcher Plants lie in wait.

What does this mean?

Salamanders have long been recognized as important nutrient cyclers in forest ecosystems.

As they move between terrestrial and aquatic sites, they redistribute nutrients between the two habitat types. They devour invertebrates, many of which are involved in decomposition. In this way, salamander populations have profound effects on the rate of decomposition on the forest floor.

With the discovery of salamanders being eaten by carnivorous plants, it’s possible that they are a large source of nutrients for these plant populations.

For a Pitcher Plant that is used to catching small insect prey, a salamander is a comparatively large feast!

But more questions need to be answered before researchers can say for sure how salamanders are contributing to the plants’ diet.

Just the beginning of the story

One of the most inspiring things about science is that with each new discovery comes more questions!

The story of the salamander-eating Pitcher Plants is still unfolding.

This past summer, Patrick and Amanda Semenuk, a Guelph undergraduate researcher working out of Dr. Alex Smith’s lab, were knee-deep in bogs, surrounded by a cloud of mosquitoes, conducting fieldwork to delve deeper into the details of this story.

Again, they collected data on the frequency of salamanders getting caught, this time including more plants, not only at the original site of discovery but also within other Pitcher Plant populations in the park.

Are the salamanders ending up in the pitchers by “accident”?

Some pitchers are flush with the bog surface, and therefore it is possible that the juvenile salamanders may end up trapped in them simply because they took an unlucky step.

However, in other cases salamanders would have had to climb up to 10 cm along the side of a pitcher to end up inside. Are the salamanders attracted to the insect prey in the pitchers for their own meal? Or perhaps they intend to use the pitcher as a shelter from predators?

To answer these questions Patrick and Amanda have started by looking at the morphological characteristics and location of pitchers that have been successful in catching salamanders.

Curiously, it is only Spotted Salamanders that have been found in the plants. Researchers have yet to come across of a case of plants trapping the very similar Blue-spotted Salamanders. The Spotted juveniles do outnumber the Blue-spotted by about 30 to 1 at the study site, so perhaps the lack of this observation is due to their low abundance and the search effort of the study.

But the possibility remains that there is another explanation for why only the Spotted Salamander has so far been observed in the pitchers.

These are just a few of the questions that are being asked following this discovery, and we can expect that there will be many interesting findings as research on this continues.

This discovery demonstrates that even in a place that has hosted researchers for 75 years, there is still a lot about natural history that we haven’t discovered yet.

All the more reason to get out and explore!