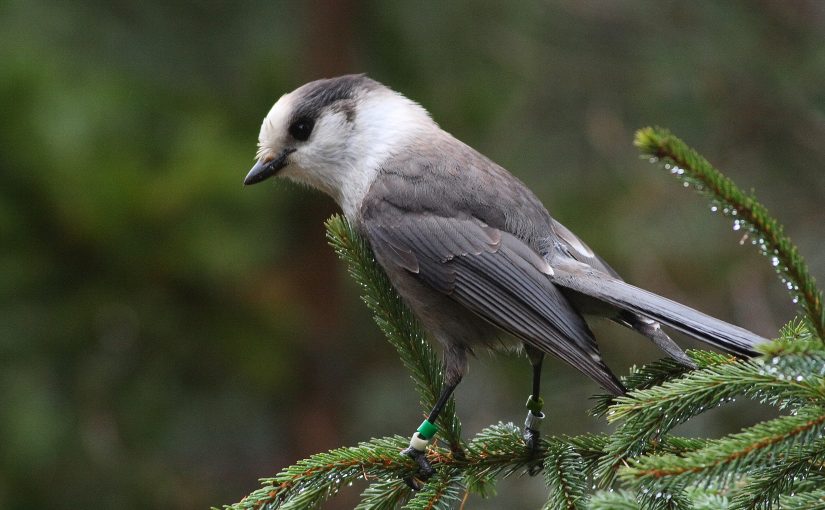 “The early bird gets the worm” usually makes us think of robins.

But the real early bird isn’t Robin Red-Breast. It’s the Canada Jay, also known as the whiskeyjack or Gray Jay.

Master of the “staycation”

This northern bird is no fair-weather feathered friend, flying to the sunny south for the winter. Like the Blue Jay, its better-known cousin, the Canada Jay is Canadian to the core. This fluffy black-capped bird weathers the snow and cold in the “true north, strong and free.”

In late February, when spring is still a groundhog’s promise away, the American Robin begins dreaming of love. The Canada Jay is a step ahead. Most of them have already hooked up with the love of their life. Each happy couple has its own patch of land, a 150-hectare territory where they’ll live out their days.

As migrating robins are winging it northward, Canada Jays are already putting the final touches on a family-sized nest. It’s cozy and snug, lined with cocoons, and bits of fur and feathers.

They usually choose a sheltered spot on the sunny south side of an evergreen tree, to take advantage of solar heating, of course.

By the time migrating robins reach Southern Ontario in early March, the lovebirds up north are already sitting on three to five eggs.

The chicks hatch in early April, when the northern forests are thigh-high in snow and the lakes are frozen. But the kids stay warm, even in snowstorms and 30-below temperatures, thanks to mom’s body heat and the well-insulated nest.

The young’uns are fledged and flying by the first week of May. They’ve left the nest before most migratory birds even arrive home!

There aren’t many worms to catch in frosty March and April. So what do these “early birds” live on? How do they feed their young?

Canada Jays dine on insects, spiders, berries, mushrooms. Bits of meat stripped from a dead animal. Eggs or baby birds snatched from another bird’s nest. They’ll even pilfer human food, which has earned them the nickname “camp-robber.”

When they find a good food source, they collect as much of it as they can – way more than they could possibly eat!

Stick it in the fridge

Canada Jays spend the late summer and fall stashing food for the winter. But their supplies aren’t stored in one central spot, like a hollow tree. These clever birds tuck a smidgeon of mushroom here, a tasty piece of carrion there, in nooks and crannies throughout their 150-hectare territory.

But first, they roll the food around in their mouths to coat it in their sticky saliva. They glue these sticky morsels behind flakes of bark, under lichen, between spruce needles, or in the fork of a tree. One bird can hide a thousand pieces of food a day.

How do they find all those meals? Researchers think it’s by memory.

They’ve watched Canada Jays in winter. These birds don’t waste time hunting for food. They don’t sniff it out or stumble across it. They sit on a branch, and when hunger strikes, they go right to one of their hidden larders.

Algonquin Provincial Park naturalists have monitored Canada Jays since the 1960s. It’s the longest-running bird study in the world.

Fewer than half of the Canada Jay territories identified in the 1970s are filled today. And the researchers think they know why: fridge failure.

Park naturalists have noticed that the birds seem to be abandoning the hardwood territories, and sticking with the boggy black spruce areas. Spruce bark may make a better fridge. Naturalists think it slows down decomposition. That’s good news for Canada Jay parents with several hungry mouths to feed.

Canada Jays live in every Canadian province and territory. Though summer campers in Algonquin may never notice one, they’re hard to miss in the fall and winter.

These charming winter ambassadors seek people out. Sharp-eyed and curious, they greet hikers and skiers and follow them along the trail.

Canary in the coal mine

Bird lovers may soon be disappointed. The Canada Jay is an indicator species—the canary in the coal mine—and Algonquin is at the southern edge of its range. If climate change continues, this friendly park favourite could disappear from Algonquin for good.