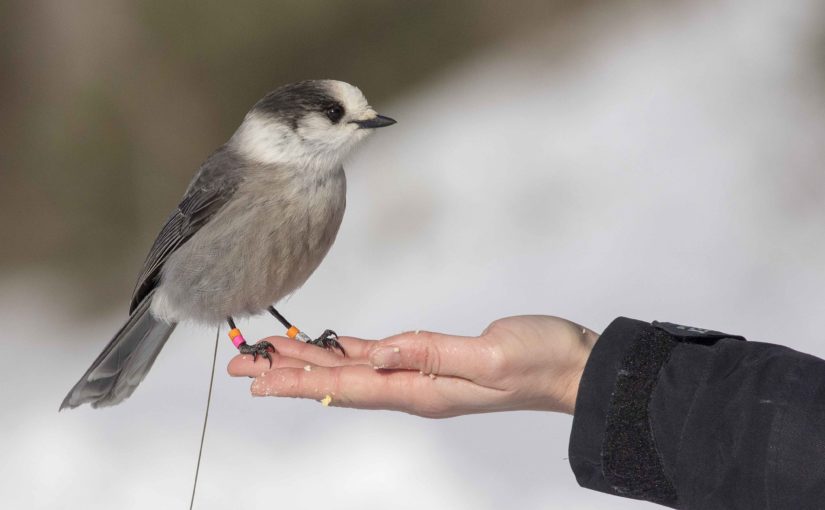 In the world of Canada Jays, winter means one thing: it’s breeding season!

Canada Jays are common in Algonquin Provincial Park. Continuing a 55 year-old tradition, a dedicated team of researchers is monitoring breeding pairs. This is the longest study of its kind in the world!

With each passing year, more is learned about the breeding behaviour and life history of these remarkable birds.

Every year, researchers monitor breeding pairs of Canada Jays as they build nests and raise their young.

The group is made up of volunteers and graduate students. The students are supervised by Dan Strickland, a retired Chief Park Naturalist, and Drs. Ryan Norris and Amy Newman from the University of Guelph.

Sadly, over the past three decades, there has been a decline of over 50% of Canada Jays in the Algonquin study area. We suspect that climatic conditions in the fall, such as warming temperatures and freeze-thaw events, are damaging the caches of perishable food.

Breeding pairs rely on these food caches for overwinter survival, and to feed their young at the end of winter. Ongoing research is continuing to investigate the causes of the population decline in Algonquin.

Nestlings are given a unique combination of coloured leg bands each year. The bands help monitor breeding success, and allow researchers to follow individuals throughout their lifetime.

Once these nestlings fledge from the nest, they will remain on their home territory, moving around as a family unit. But they do not stay as a happy family long.

After roughly six weeks, siblings will begin to fight with one another. This leads to a single dominant juvenile remaining, while its siblings are forced to leave the territory. This means that only one young each year will win the right to remain with their parents for the coming winter.

Little is known about the ejected individuals. Even though they are colour-banded and can be identified using binoculars, they are often never seen again.

Thanks to the observations of the leg bands over the past 54 years, we determined that following ejection, individuals could be moving as much as 10 km from their natal territory!

This means that birds could easily be travelling into inaccessible areas outside of  the Highway 60 corridor, which is where the study area is located.

Advances in radio telemetry technology allow young to be followed as they leave their home territories for the backcountry of Algonquin. Miniature backpacks of radio tags are worn to track the birds. Usually all that is visible to an observer is a small wire that runs parallel to the tail of the bird.

Each backpack produces a signal at a unique frequency that can be picked up using specialized antennae. This allows us to track individuals from afar, even if the birds cannot be easily seen.

Another benefit to using radio tags is that the unique signals can be identified over large distances. This means that birds can be followed when they leave their natal territory.

By land and air, we always get our bird

We are using a combination of ground, canoe, and aerial telemetry to follow individuals as they disperse over large areas of the park.

Over the past two breeding seasons, radio-tagged jays have been followed, providing new insight into where they go once their leave their natal territories.

Take BOSL KOWR, for instance. This interesting name comes from the fact that it is a young bird with bands blue over standard on left leg and pink over white on the right leg. He moved over 16 km away from his parents’ territory near Highway 60!

This year, we will once again be deploying radio tags to monitor where Canada Jays go as they move across the vast wilds of Algonquin. So if you happen to see a Canada Jay in Algonquin with a wire along its tail, you are observing a young jay that is advancing our understanding of this unique species.

We would like to acknowledge the support of both the Wildlife Conservation Society, the Ministry of Natural Resources and Forestry Climate Change Fund, and Ontario Parks for providing funding for this project.

Thank you to the Algonquin Wildlife Research Station for providing accommodation and logistical support.

For more about Canada Jays, check out this post.