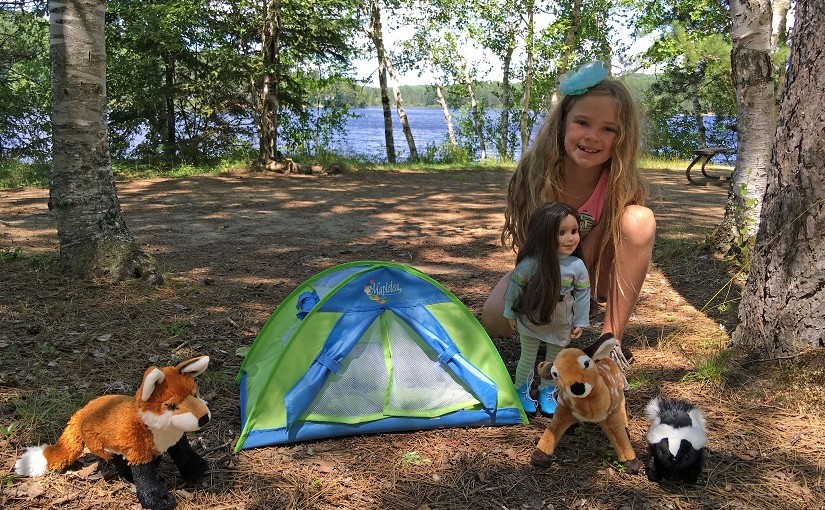 Meet Taryn. She arrived at Scarlett’s house just in time to tag along on their summer camping trip.

At first, Scarlett wasn’t sure Taryn could come camping. After all, most toys aren’t ready for the great outdoors. But as she unwrapped Taryn’s gear, she realized her new friend was well-equipped for their adventures.

Hailing from the Canadian Rockies, Taryn absolutely LOVES camping. Plus, Taryn came prepared with her own doll-sized camping supplies, from sturdy backpack to comfy hiking boots. She even has her own tent! Taryn had plenty of energy, keeping up with her new friend as they explored the park together. She even packed up her backpack and tagged along on a hike through Algonquin. Taryn and Scarlett made friends wherever they went, helped by their wildlife friends.

The fox, fawn and skunk make it easy to share Taryn.

They also sparked some great questions about Canada’s wildlife!

Taryn and Scarlett are sure to remember their trip to Lake St. Peter because they wrote everything down in Taryn’s story journal. After a busy day on the trail, Taryn and friends were happy to hop into their tents, change into their pjs, and snuggle into their sleeping bags. And on the drive home, they were already planning their next adventure.

Keen to invite Taryn on your family’s next camping trip?

Taryn’s made by Maplelea, a proud corporate sponsor of Ontario Parks.

For a limited time, receive Taryn and everything she needs for a camping adventure for one special price!