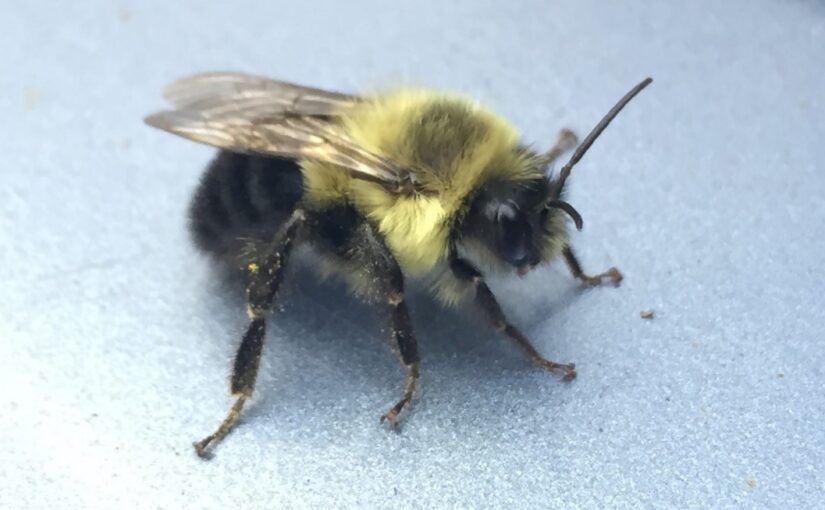 Sarah Litterick is a Canadian nature nerd, fungi hunter, hiking enthusiast, beach bum, animal lover, and photographer. Sarah is currently upgrading her education with hopes of enrolling in the Wildlife Biology and Conservation program at the University of Guelph.

I’ll be honest: all my life I have had an intense aversion to insects, especially the stinging kind. I don’t know where this deep fear came from, but more than once, I have taken flight in a screaming dash because an insect came too close.

Nonetheless, in 2015, I joined the Friends of Pinery Park Board of Directors and was looking for ways I could get more involved in park projects.

That year, I signed up for their first-ever Bumble Bee Survey. The survey was a citizen science project and joint venture between the park and Wildlife Preservation Canada, along with many other supporters.

I honestly don’t know what made me say “yes” to this project, but I am glad I did.

The main goal of the survey was to see if we could locate the Rusty-patched Bumble Bee. This bee was quite common in Canada well into the 1980s, but has since disappeared. The last known sighting in Canada was at Pinery Provincial Park in 2009.

Secondary to finding Rusty? To take a broad survey of all the bumble bee species found in the park.

I had never done any fieldwork before, and things were a bit clunky at first.

Putting my fears in the backseat, I had to learn to keep track of all the equipment that goes with hunting bumble bees. Balancing a net, clipboard, camera, vials, cold bag, etc., proved challenging while traipsing through the different survey sites, but I eventually found my groove.

Thankfully, my first survey partner was fearless and showed me how to catch the bees. The first time I was terrified, and it took awhile for that fear to turn into an adrenaline rush, but turn it did, and I was hooked.

Typically, surveying starts around the end of June and follows through to mid-September.

A survey usually consists of covering a set of four predetermined survey sites once a week. There are four site sets to choose from throughout the park.

Temperature and weather conditions are considered, as bees do not tend to like extremes or rain. Sometimes we must adjust our schedules if the weather isn’t cooperating.

We are encouraged to work with a partner for safety, and we spend a minimum of a half an hour at each site.

Bumble bees tend to hang out and dine beside roadsides and open grassy areas where wildflowers abound.

Our own waggle dance

At the site, we record our start (and end) time, temperature, and percentage of cloud cover. We gather our equipment and walk slowly throughout, scanning the tops of vegetation for movement.

We sometimes hear the bees before we see them.

Ideally, it would be lovely if the bumble bees sat still for a photo shoot, but that is not usually the case. Hence the need for a net. Once caught, we take photos of the bees’ face, thorax, and abdomen and then we release them unharmed back into their environment.

We then edit and take the photo series of each bee and upload it to website called Bumble Bee Watch for verification. A pollinator scientist on the other end will verify our sighting and the species of each bee.

Bumble Bee Watch is a site anyone can use and covers sightings from Canada and the US. It can be found at bumblebeewatch.org with instructions for use.

Sometimes, if there are a lot of bees on a site, we will use a cold bag to collect them. It slows them down a bit, which makes photographing them a little easier.

It doesn’t hurt them, as it’s only for a short time. It also prevents us from catching the same bee multiple times.

In 2017, the last bee of the season for me was an American Bumble Bee, the first ever to be recorded at Pinery!

It wasn’t Rusty, but exciting nonetheless, as this bee species is also in decline.

I do not know how many kilometres I’ve covered or hours I’ve logged, but every step and every minute has been full of wonder and amazement.

I can now walk through a field with grasshoppers hopping about and tune them out for the buzz of my fuzzy friends. Taking macro shots of bumble bees has also helped assuage my fear of insects in general.

I have seen many other amazing creatures while surveying that I probably would not have otherwise seen.

I’m getting better at identifying flowers, plants, and trees. I’ve witnessed the slow, beautiful, miraculous change of Pinery over the survey season in all parts of the park. I have met so many amazing people in the scientists, park staff, fellow surveyors, and inquisitive park guests. My permanent survey partner, Trish, has become my closest and dearest friend.

I am so grateful to be part of this amazing project. I’ve learned so much about bumble bees, ecology, and the healing power of nature.

I have had some of the best conversations of my life on those trails and had many laughs along the way. Pinery never disappoints. The bumble bees show up and Mother Nature is always ready to show off if you’re observant.