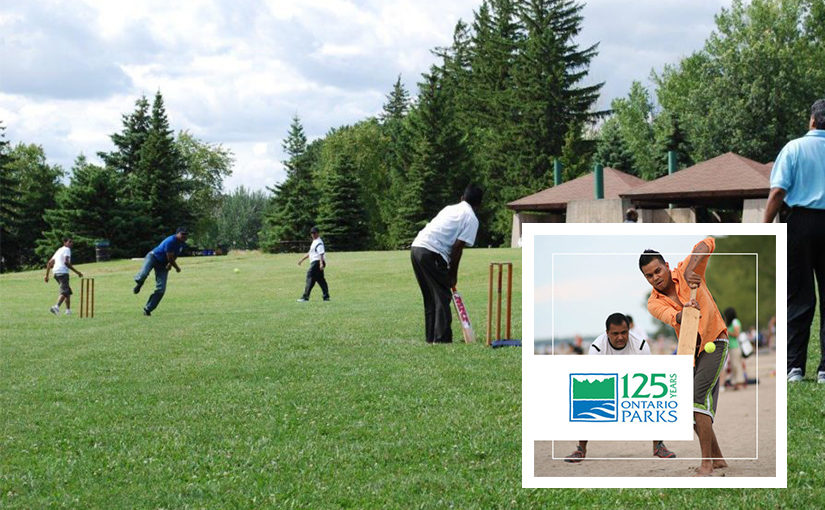 …the construction of the first cricket ground in the provincial park system!

Why is a cricket ground a right “corker” of an idea?

We wanted to mark Ontario Parks’ 125th anniversary with an exciting new facility for our visitors, and cricket was a perfect fit!

Bronte Creek Provincial Park has been a popular picnicking destination since 1975, drawing visitors from Toronto, Hamilton and Milton and all locations in between.

Because it’s so close to Toronto and the GTA (located just north of the QEW between Oakville and Burlington), Bronte Creek provides the “first provincial park” experience to many Ontarians. In the spirit of Healthy Parks Healthy People, Bronte Creek wants visitors to get active outside! The park offers 13 km of nature trails and bike paths, a huge outdoor swimming pool, outdoor play equipment, and a renowned disc golf course.

And on any given weekend in the summer, you’re likely to find a group of picnickers playing cricket.  So we thought…let’s put in a proper pitch!

Cricket is the fastest-growing sport in Canada with well over 40,000 cricketers! In fact, in the early 1800s, cricket was more popular with Canadians than *GASP* hockey! Sir John A MacDonald, Canada’s first Prime Minister, even declared it to be our national sport (!), however it was soon over shadowed by baseball and hockey.

Cricket actually also links well with Bronte Creek’s Victorian Farmhouse, as cricket was first played in Britain some 400 years ago.

It’s said that once you learn to play, you won’t want to stop.

Just starting out? All you need is a ball, bat, and wicket (and some fellow cricketers!). You can get fancier gear and equipment once you’ve caught the “bug.”

No matter your fitness or skill level it’s a game for everyone, and we really hope to have the chance to bring this sport to Bronte Creek! If you’d like to help us build our new cricket ground at Bronte Creek, visit our new donations page.