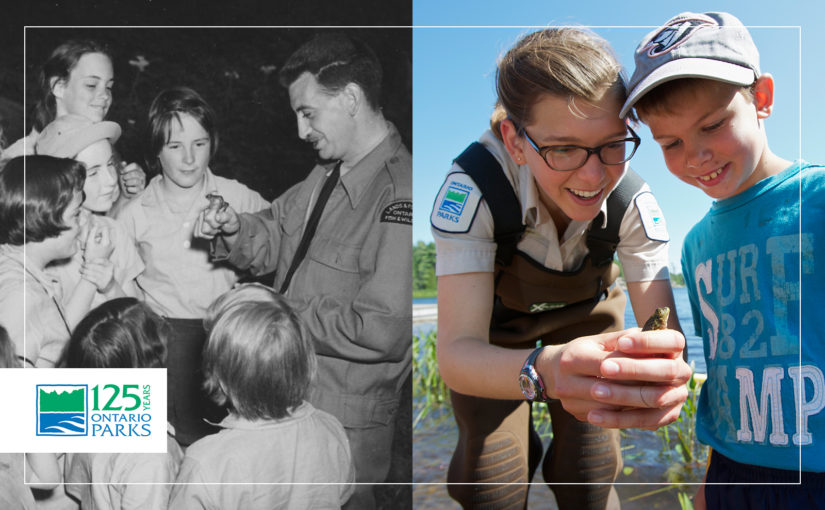 “Through these interesting and enjoyable experiences which are both educational and recreational, interpretation contributes to the inspirational value of the outdoors and fosters an understanding, an appreciation, and an intelligent use of our parklands.”

Ontario Parks’ nature programs are designed to help people discover and connect with the natural and cultural history of the park during their visit.

Algonquin Provincial Park was the first provincial park in Canada to have a nature program, developed and led by experts in natural history. It began as a trial in 1944 but was so popular with park visitors that it blossomed into a world renowned program, now offered in over 70 provincial parks.

The following timeline traces major milestones in the history of nature education in Ontario Parks:

1944 – Frank MacDougall, Deputy Minister of the Department of Lands and Forests, hired Professor Dymond (then Director of the Royal Ontario Museum of Zoology) as a seasonal park naturalist in Algonquin Provincial Park.

During this first summer, there were 15 guided hikes and five visits to children’s camps. A labelled trail was also created in the park.

1946 – Two students, Al Helmsley and Norm Martin, were hired to assist J.R. Dymond in the interpretive (nature) program at Algonquin.

1948 – The first (temporary) museum in Ontario Parks was established. A 14’ by 14’ marquee tent, provided by the Royal Ontario Museum, housed exhibits of birds and mammals, live reptiles and amphibians, and a collection of local conifer samples. The tent museum proved to be very popular. 1962 – Naturalist programs were presented on the beach at Lake Superior Provincial Park at the Agawa Bay campgrounds. The benches were driftwood logs and the screen was a large sheet laced between wooden poles. Power for the projector came from the park office and ran overhead through the trees.

2011 – A Learn to Camp program was established to help people discover the joy of camping in a safe and fun environment.

2015 – Ontario Parks launches a Healthy Parks Healthy People initiative to promote the link between a healthy environment and healthy society.

2018 – Today, 72 parks across the province offer interpretive programming. Sixty-three parks have a Visitor Centre, activity centre, or museum. Ontario Parks is celebrating its 125th anniversary with special programming and events.

With so many of our parks offering naturalist programs, there are plenty of opportunities to discover what makes each park unique.

Ontario Parks naturalists and guides provide enjoyable and memorable experiences for visitors who want to explore the natural and cultural wonders of our provincial parks.

Come and join us! A listing of events in provincial parks can be found here.

Look for your favourite parks on social media to keep in touch with their weekly programs and events.