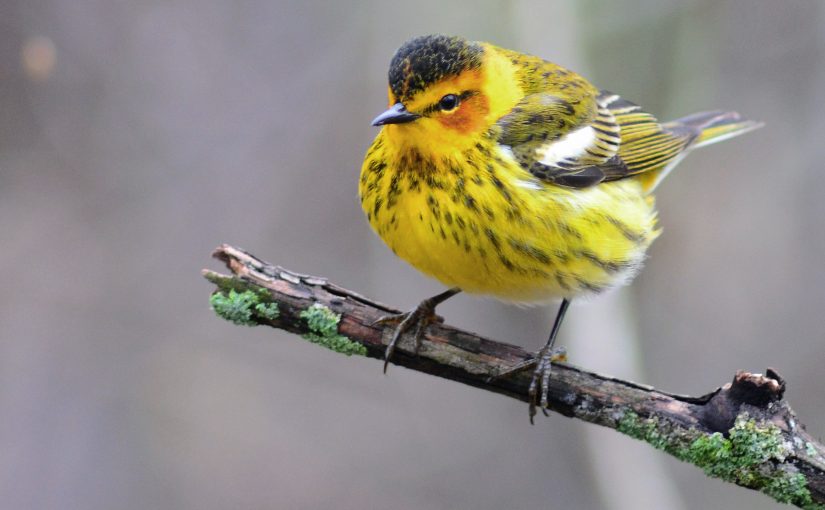 Lev Frid, birder par excellence, recently explored some of our northern parks, and wrote us the following post. If you love songbirds, this is a must-read!

For many Ontario birdwatchers, it’s all about the spring. Great Lakes havens such as Rondeau, MacGregor Point and Presqu’ile Provincial Parks host birding festivals and draw lots of visitors itching to see newly-arrived spring migrants.

What you might not know is that there are many opportunities to view these same birds on their breeding grounds in the boreal forest in some of our northern parks.

Ontario’s boreal forest is massive, stretching across a huge part of the province – though many folks have yet to venture into this bold and impressive ecosystem. Characterized by vast expanses of forests, lakes, and spruce bogs, the boreal is a beautiful and stark ecosystem.

Read more about the boreal and its residents here.

While many visitors often remark at the amount of biting insects that also call the boreal home, this is part of the reason that the boreal forest is a real “songbird factory,” being the summer home of millions of warblers, flycatchers, vireos and others that come here to raise their young. These are the same birds that we see during migration in southern Ontario, except they are here to stay for several months.

Some come here from a very long distance away. The Olive-sided Flycatcher — more likely to be heard singing its characteristic “Quick, three beers!” than seen — is a champion migrant that spends its winter in South America, venturing into the boreal to raise a family.

Its cousin, the smaller Yellow-bellied Flycatcher, only spends about two months here to do the same (a testament to how rich in food the environment is!).

Twenty-five warbler species breed in the boreal forest, including the colourful Blackburnian, Bay-breasted, Cape May and Magnolia Warblers that always draw crowds during migration in southern Ontario.

While spring migration is very dependent on the weather, breeding birds are always present and give themselves away by singing. They have already set up territories and are usually reliably seen in the same areas for several weeks.

This means that while a rare spring bird that showed up may not stay for more than a few hours, your friendly park naturalists will be able to tell you the best places to see the local breeding birds.

Besides the abundance of breeding birds, the boreal forest has an assemblage of resident birds that can only be seen in this distinctive habitat.

Birds such as Spruce and Sharp-tailed Grouse, Black-backed and American Three-toed Woodpeckers, Canada Jay and Boreal Chickadee are tough species that can survive the brutal winters in this part of the world.

Canada Jays use their amazing memory to recall where thousands of hidden food stores are located.

Spruce Grouse are able to feed on nutrient-poor spruce needles to survive. Woodpeckers and chickadees are experts at finding small food items hidden in bark.

Northern owls — Great Gray, Northern Hawk and Boreal Owls — are the ghosts of the boreal, and the challenge of finding and thrill of seeing them are huge draws for birders making the drive.

An unforgettable and uniquely Canadian experience.

Ready to combine the high quality and quantity of birds with beautiful northern landscapes with the very real possibility of spotting a prowling Lynx or hearing a pack of wolves howling into the night?

Plan a boreal birding getaway to a provincial park like:

We promise: it’s definitely worth the drive.