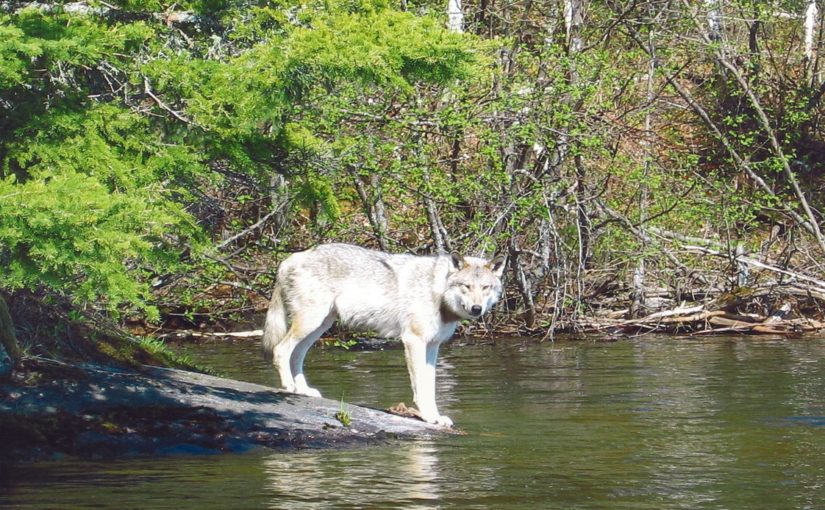 Today’s post comes to us from MacKenzie Schmidt, Discovery Program Coordinator for our Algonquin Zone.

For centuries, wolves have captured our imagination and wonder. Tolstoy wrote about them, biologists have studied them in earnest, and campers staying at Ontario Parks have had the opportunity to howl to them during public wolf howls since the 1960s.

In fact, the very first public wolf howl at Algonquin Provincial Park (1963) represents some of our earliest educational programming that is paramount to Ontario Parks’ mission today.

The history behind wolf howls at Bonnechere

Although famous in Algonquin Provincial Park along Highway 60, many people might not realize the prevalence of wolves on the east side of Algonquin, stretching down towards Bonnechere Provincial Park. Wolves are heard there frequently during the summer months.

Over the past decades, renowned biologist and naturalist Michael Runtz has spent countless hours studying and photographing the wolves in the area.

When asked about his experience with wolves Michael had this to say:

“It seems hard to believe that it was 25 years ago when the first Bonnechere wolf howl was conducted. Over those many years, thousands of visitors to Bonnechere Provincial Park were treated to the soul-stirring music of wild Eastern (Algonquin) Wolves.

“The howls were initiated as an attempt to not only introduce Bonnechere campers to the wolves next door in Algonquin Park, but also to appease some of the negative feelings held by local residents toward wolves.

“I was asked to do the first howl because I had been working as an interpretive naturalist in Algonquin off and on since the early 1970s, and had a lot of experience with the wolves, especially when it came to conducting public wolf howls. I also had photographed those elusive animals and thus could speak about them from personal experience.”

The most memorable howl

“There have been many memorable moments on the Bonnechere howls,” continues Michael. “One was an adult wolf that not only repeatedly answered back to my howls, but also kept approaching closer.

“We could hear it walking in the woods mere metres from us, and when it began barking, even I nearly jumped out of my shoes! As we left, a few lucky participants actually saw the beautiful wolf when it crossed the road between two cars.

“May this year’s howl continue the tradition!”

Howling with wolves is truly a moment you will not forget. I make this statement from personal experience! I remember so clearly the first time I had the chance to participate in a wolf howl; it was my first year as a student park naturalist at Bonnechere Provincial Park.

We had been out for over an hour and a half, the rain started coming down, and we had yet to hear wolves. We made our last stop, Michael called a few times and then had all of the participants join in for a group howl, but still no response.

We almost all headed back to our vehicles to go home when someone from the crowd asked if we could all try one more time as a group. We howled together and then waited in silence.

What followed was the loudest pack howl I have ever heard! All of us were ecstatic.

Michael returned the howl again as a lone-caller, and the alpha came in closer than the pack had been, barking in our direction. To date, this has been the most memorable and incredible wildlife interaction I have ever had. It was also so rewarding to see how many people had been touched by this close encounter with such an amazing species. 25th anniversary of the howl

For the past quarter-century, a wolf howl has been hosted at Bonnechere Provincial Park in partnership with Michael Runtz and the Friends of Bonnechere Parks. This event has given the public an opportunity to hear wolves and interact with them without fear.

This year, join us on August 25, 2018 to experience the wonder of the Wolf Howl for yourself!