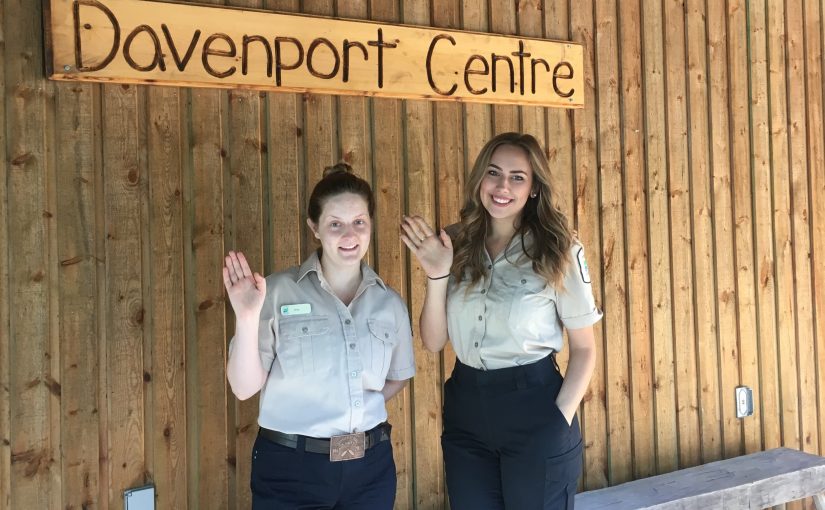 Bonnechere is celebrating a very special birthday this season. This summer marks 50 exciting years as an established provincial park!

After some reminiscing, we realized that Bonnechere has experienced some pretty significant changes throughout the past five decades…which is why we feel this year calls for an awesome festival!

Find details about our week-long anniversary celebrations at the bottom of this post.

But first, let’s take a walk down memory lane…

We’ve come a long way since our early days. For instance, staff fashion has greatly improved:

And we definitely have better Park Store swag than we used to:

Not only has employee fashion changed, but Bonnechere has also improved camping facilities since opening in 1967.

We now have a wide range of camping options since the implementation of four rustic cabins and a cottage. Our cabins offer some comforts of home, while still allowing for a peaceful getaway.

For those that prefer tenting it: no worries! Although Bonnechere started out with only a small campground, throughout the past five decades there have been huge additions.

The River Loop campground has been further developed, offering secluded river sites, and in the late ’90s, the Tall Pines campground was upgraded with electrical sites.

Bonnechere’s educational programming and research have also gone through a transformation. The not-for-profit Friends of Bonnechere Park was founded 25 years ago this year (it’s a big birthday for them too!), and has worked alongside Bonnechere to support and increase the historical, cultural and natural knowledge-base of the area.

For instance, many people don’t realize that quite a few archaeological digs occurred in the park and surrounding areas throughout the ’90s and early 2000s, with artifacts such as projectile points, early pottery and farming equipment uncovered.

The Friends of Bonnechere Parks have also supported Bonnechere’s Natural Heritage Education (NHE) curriculum. The Davenport Centre was built in the ’90s, creating a main Visitor’s Centre space for campers to learn about everything from turtles species to practicing the ancient Indigenous method of clay pot-making.

In the early ’90s, old ranger cabins were moved to Bonnechere from neighboring Algonquin Provincial Park, and they’ve been used for interpretive programs ever since. The cabins were given their own designation site at Bonnechere, called “The Depot.”

Every summer during an evening known as “Spirits Night,” staff members put on a memorable theatrical production for the public, complete with bonnets and suspenders, much to campers’ delight.

Making the best of the worst

One of the coolest things about Bonnechere is our history of making the best of situations. The most recent example of this is hard to miss if you happen to find yourself by Bonnechere’s sprawling sandy beach.

About five years ago, a massive storm hit the park, creating extensive damage. One tree that was taken out by the storm was a nearly century-old white pine.

That same pine has now become Bonnechere’s very own Book Tree, and acts as a lending library hub for campers to take a book, leave a book or just read a book.

After spending some time lost in thought about Bonnechere’s history, we think the park has aged quite well. In fact, it’s aged so well that birthday celebrations are in order!

This summer, during from July 8-15, come celebrate the past, present and future of Bonnechere. Take part in Bonnechere’s Homecoming ceremonies! Add your own special memories to our time-capsule, or jump aboard a voyageur canoe and enjoy a guided tour down the Bonnechere River. And you won’t want to miss the story-telling campfires and award-winning musical entertainers!

There’s something for everyone during the 50th Anniversary of Bonnechere Provincial Park!

Don’t forget to book your campsite. You can find the full schedule of events here.