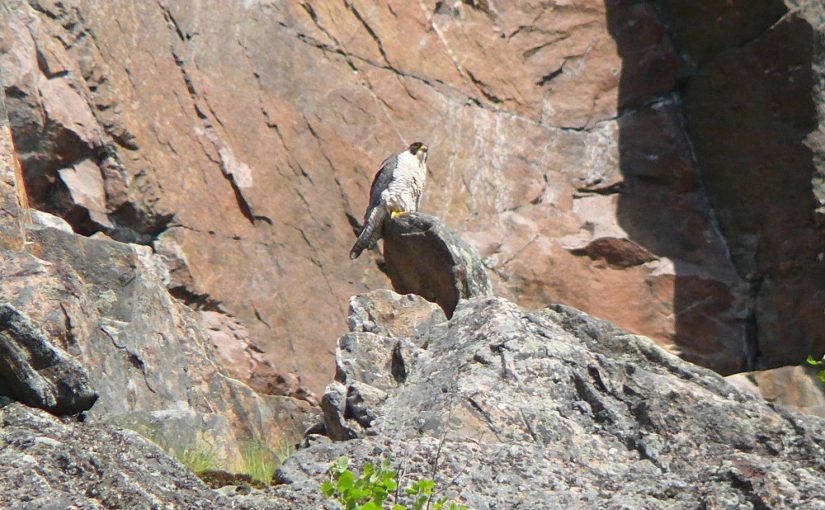 Being a staff member at Bon Echo has given me a lot of incredible experiences: seeing the Mazinaw Rock at sunset, camping on Joeperry Lake, and a very memorable Kishkebus canoe trip, to name a few.

Above all, my experiences with Peregrine Falcons — small birds of prey and the fastest animals on the planet — will always be one of my favourites.

A large part of my job at Bon Echo is working as an interpreter on the 45 minute interpretive tour around Mazinaw Lake.

The tour boat is where I saw a peregrine for the first time. It was breathtaking. I was out on the boat trying to find the peregrine’s scrape. Peregrine Falcons don’t make a nest like other birds do; they find a suitable ledge on the cliff, dig a little divot or indent, and lay their eggs in it. This is called a scrape.

So, with binoculars in hand I set out to scan the massive Mazinaw Rock for a relatively small and VERY fast bird of prey.

Not an easy task.

One telltale sign of a Peregrine Falcon’s presence is their distinctive screech.

This noise allowed me to finally spot this amazing bird soaring through the sky for the first time! Peregrine Falcons are very territorial and will gladly use this screech to let someone or something know if they are getting too close to their scrape. It’s common to see them chasing away ravens and even Turkey Vultures, both large birds compared to the Peregrine Falcon.

It’s beautiful and exciting to hear their cry, but once you hear it, it usually means that it’s time to move on.

I really was in awe the first time I saw these birds, having heard so much about them, but to see one first-hand was something I will never forget.

Peregrine Falcons are the superstars of aerial combat.

They will fly high in the sky, all while keeping track of their prey, and when they are ready, they will dive. This dive is what truly makes these birds special. When they do this, they can reach speeds of up to 300 km/hr, making Peregrine Falcons the fastest animal on the planet! As they approach their prey, they open their wings and swing their legs out to make contact.

It isn’t the talons that kill the prey, but the sheer force of the impact.

The talons are just there for grip. Peregrine Falcons can weigh up to 3.3 lbs (1.5 kg). That’s about the same weight as a two-slice toaster.

Imagine being hit with a two-slice toaster going 300 km/hr. OUCH!

The dive is not only dangerous for the prey, but for the peregrines too. If they miss their target or don’t come out of their dive soon enough, they can end up in Mazinaw Lake. As these birds are learning to hunt, it’s quite common for them to miss or lose their grip on their prey.

I’ve seen prey, such as Blue Jays or seagulls in the water, and I knew that a Peregrine Falcon was so close to having its next meal. If the peregrine is successful, it will take it back up to the cliff and start to eat. My favourite experience with the peregrines was when I was next to the cliff.

I had not seen or heard the peregrines that day, but then I noticed something floating in the air.

I took a closer look and realized that I was looking at feathers. Just the gentle fall of feathers.

There was no screech, no soaring bird, just feathers. I knew there was a peregrine falcon close by, and it had been successful in its hunt.

A need for speed

Being able to show people the fastest animal on the planet is such a great way to help people connect to Bon Echo.

When people think of fast animals, they almost always think of the cheetah.

It’s so exciting to be able to tell people that they don’t need to go to Africa to see something fast. In fact, the fastest animal on the planet calls Mazinaw Rock its home.

I hope this helps you see that we have incredible wildlife right here in Ontario; you just need to know where to look.