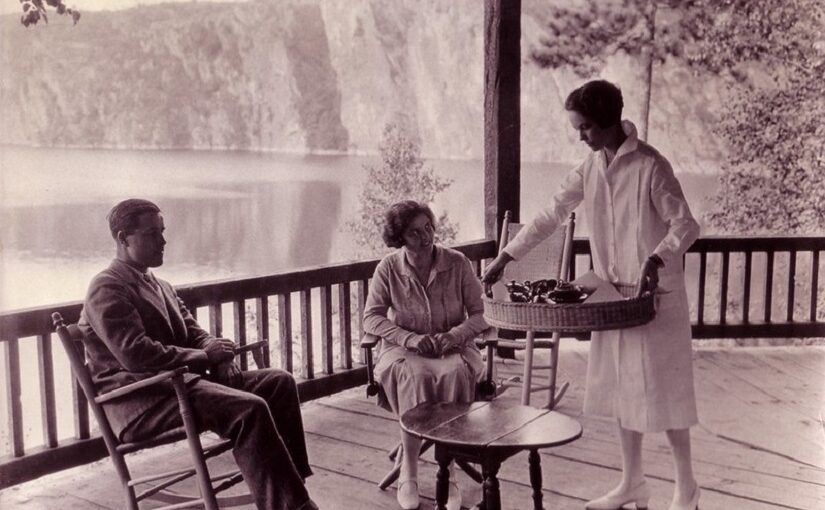 Did you know some of your favourite provincial parks like Bon Echo, Sandbanks, Presqu’ile, and Algonquin have hosted the summer vacations of nature-lovers since the turn of the century?

By the end of the 1800s, pioneer society was changing. Increased prosperity led to a growing interest in summer resorts and leisure activities. People in Ontario were using their own wilderness for recreation, just like we do today.

Resorts became the popular hangout for the well-to-do, like Lakeshore Lodge (Sandbanks) or Bartlett Lodge (Algonquin).

Dr. Weston Price and his wife Florence were on their honeymoon in the Bon Echo area in 1899.

They fell in love with the area, and decided to build an inn opposite Mazinaw Rock. The couple envisioned it as a healthy, comfortable, and respectful retreat, where nature-lovers could escape the summer heat of the cities. Dr. Price felt Bon Echo inspired the mind and rejuvenated the body, some reasons why people still go there today.

The Prices purchased lakefront property on Mazinaw Lake, and had an architect design a resort like those found in the United States.

Can you imagine how difficult it would be to get lumber, nails, and other supplies to build a resort in 1900 and 1901?

The Bon Echo Inn opened in the summer of 1901. It was a three-story structure with 50 beds and verandas all around it, with a magnificent view of Mazinaw Rock. Surrounding the inn were five cottages near the shoreline, tent platforms, a boat house, windmill, 9-metre water tower, and a dock on each side of a narrow channel connecting upper and lower Mazinaw Lake.

As with many other 19th century resorts, the inn had religious overtones. Liquor was not permitted on the premises, and visitors were expected to attend Sunday services in the dining room.

Are we there yet?

Most of the visitors to the Bon Echo Inn came from the U.S., and reaching the inn was no small feat.

Reaching Bon Echo in the early part of the 20th century involved travel by rail, horse and buggy (later by car), and then by boat.

One would leave Montreal or Toronto by train in the morning, and get off at the train station in Kaladar around 2 p.m. In 1906, a return train ticket from Toronto to Kaladar was $5.75! Staff from the inn would be waiting to take guests by horse-drawn carriages over a rough rocky road to the south end of Mazinaw Lake. Guests transferred to a boat for a 9.5 km ride up the lake to the inn’s dock.

The boats used to ferry people to the inn were named the Wanderer and the Tuttle. Sound familiar? The Wanderer is still the name of a tour boat operating in Bon Echo.

Guests would arrive at the inn around 4 p.m., just in time for tea.

The bottom floor had a dining room, lounge, reception room, sitting room, and kitchen. The upper two floors had bedrooms.

Rustic décor was everywhere, with furniture and ceiling beams made from birch poles with the birchbark left on. Kitchen gardens supplied some of the food for guests, while local farms supplied milk, eggs, vegetables, cheese, and meat. Fruit came from local orchards. A large dinner bell was used to call guests for dinner.

In 1906 it cost $9-15 per week to stay at the inn, and that included all meals! This may sound inexpensive to us today, but at the turn of the century these rates restricted the inn’s clientele to wealthy guests. Guests loved to swim and fish in the waters of Mazinaw Lake, or rent rowboats, canoes, or small boats with inboard motors. They often relaxed on the inn’s veranda, taking in the awe-inspiring view.

More adventurous guests could walk a wooden footbridge crossing the Narrows, the narrow channel near the inn.

The footbridge led to a stairway of wood and iron scaling the face of Mazinaw Rock. As you can see, this was not for the faint of heart.

Part of the old stairway can still be seen today on the Cliff Top Trail.

On their next visit to Bon Echo, guests would find major changes to the inn they knew and loved.

A place for artists and thinkers

Flora was an author and an admirer of the American poet Walt Whitman. Flora devoted herself to the causes of women, especially the right to vote.

Under Flora’s ownership, the inn opened for the 1911 season with several changes.

A brochure from the time said “Bon Echo is to be a joyous pleasure ground for young people, as well as a restful and quiet place for older ones, and a safe place for children. Music, dancing, and games, contests on land and water, and exploring excursions will be encouraged. Teachers, artists, and lecturers with liberal minds will be invited to express their noblest and best.”

The tone of the new inn was intellectual, but not stuffy, and alcohol was permitted. As a visitor you might attend a lecture on Walt Whitman, or be part of a discussion on the suffragette movement with Charlotte Perkins Gilman, an American author and lecturer for social reform. Charlotte was a friend of Flora’s.

You could listen to a band play at dances, attend a séance, or enjoy a poetry reading. Outdoor activities included tennis courts and croquet.

Guests could hire a boat for the day for a leisurely tour of Mazinaw Lake, or enjoy a picnic at the top of the cliff.

Children visiting the inn had their own dining area and a chef who specialized in children’s meals.

After Flora’s death in 1921, her son Merrill and his wife Muriel took over the inn in the spring of 1922. Merrill was a well-known author and playwright in Canada and the U.S. He expanded the resort with a few more cottages, including one named Dollywood, now the Visitor Centre.

The inn was now much more artistic, rather than progressive. Merrill was a member of the Arts and Letters Club in Toronto, and associated with artists from the Group of Seven, like A.J. Casson, Arthur Lismer, Franklin Carmichael, and A. Y. Jackson.

Merrill commissioned the artists to make promotional materials for the inn. Several of them stayed at the inn or in one of the cottages while they worked. Other artists like F.M. Bell-Smith and Charles Comfort also visited to paint. Since Merrill was a playwright, the theatre played an important part of life at the inn under his management. An outdoor theatre was built on the beach below the inn.

If you enjoyed drama, you, other guests, and some staff would get together about three times a week to think up an idea for a skit, like an incident on a fishing trip.

The group would work it into dramatic form, get a few actors, and present it with costume at the outdoor theatre. Two to three presentations would take place in an evening.

The demise of the inn

The Bon Echo Inn, and other early resorts, experienced difficult times in the late 1920s.

The inn closed in 1928, and Merrill suffered from a lack of capital after 1929, shortly before the Great Depression.

Today, three buildings from the Bon Eho Inn-era are all that remain: Dollywood (now the Visitor Centre), Greystones (now the Friends of Bon Echo Gift Shoppe and Café), and Cabin on the Hill.

The inn and remaining buildings are recognized by the Ontario Heritage Trust as provincially significant for the well-known artists who painted and sketched here, and for Flora’s ideals. A plaque between Dollywood and Greystones commemorates their importance. The next time you are at Bon Echo, take a look at these buildings and where the inn used to be.

Close your eyes and imagine you were there during the heyday of an early Ontario resort, the Bon Echo Inn.