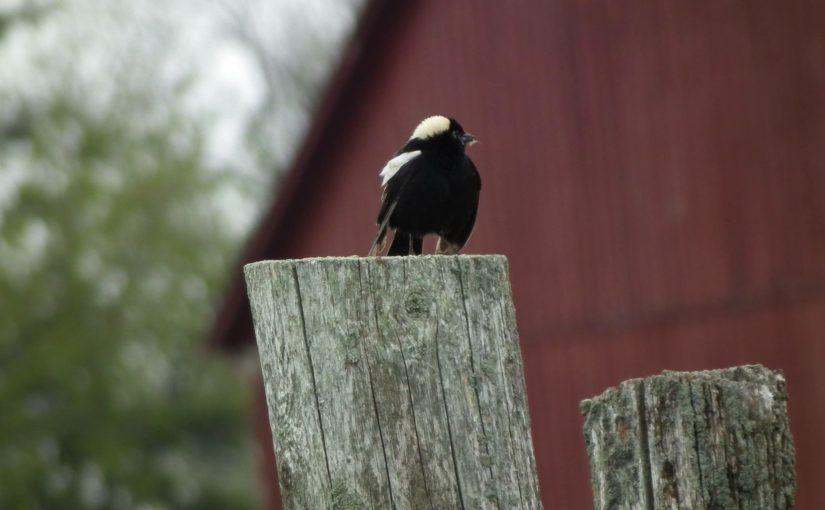 When Bobolinks are mentioned in mixed audiences, you invariably get muffled laughter, quizzical looks and finally the question, “A bobo-what?”

Bobolinks are small songbirds in the same family as grackles and meadowlarks.  The breeding male is most recognizable by its black body and white back with a buff patch at the nape.

They like tall grasslands, uncut pastures and overgrown fields making Bronte Creek Provincial Park perfect bobolink habitat, since it’s on 684 ha of protected area, most of which is farm fields. Bobolinks spend much of their time out of sight, on the ground feeding on insects and seeds. They seem to appear out of nowhere and can be spotted flying in the sky or over the tops of vegetation singing a bubbling, musical song.

Unfortunately, Bobolinks were added to the Species at Risk in Ontario List in September, 2010; their current status is threatened.

Being threatened means that, while the Bobolink is not endangered, they are likely to become so if steps are not taken to mitigate the harmful factors affecting their population. From 1997-2007, it is estimated that the Bobolink population in Ontario declined by 33%. If the population continues to decline at that rate, the Bobolink will be extinct in just over 90 years.

Causes of the Bobolink’s decline

As a wide ranging species that migrates in and out of Ontario, there are likely several causes for this decline. Some of the threats to Bobolink in this province include: The primary threat to Bobolink populations is thought to be the trend towards earlier cutting of hay fields. Climate change and increasing temperatures have impacted this and this cut tends to occur about two weeks earlier today than in the 1950s.

So what are we doing? What can you do?

Help save Bobolink by:

Review the Ontario Recovery strategy for the Bobolink and the Eastern Meadowlark.