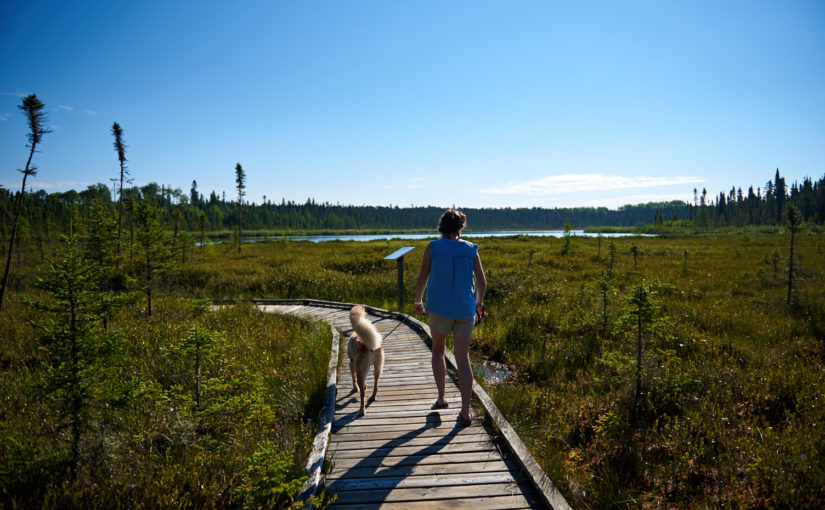 As humans, we tower over many things. Because of our height, we often miss some of the most magnificent parts of the boreal forest — specifically, its wetland ecology.

Here at Blue Lake, the spruce fen is one of the most traveled trails, home to some of our most noteworthy critters and fantastic flora. Unfortunately, many go unnoticed due to their small size.

A fen is a type of wetland that tends to harbour unique and well-adapted species. The plants and animals found within our Black Spruce Fen Trail are some of the toughest, most resilient beings in our ecosystem. Due to the spruce fen’s highly acidic soil, it takes something special for the plants and animals to call it home. Some of the plants that thrive in this environment have certain medicinal properties that have been of great use to the first people on this land. Here are four of the most spectacular plants of our Black Spruce Fen Trail:

You’ll have to get close to the ground to see this tiny plant!

The round-leaved sundew is one of the feistiest of the fen. This seemingly innocent plant is a vicious carnivore, luring bugs to their death.

These deceitful plants attract bugs of all shapes and sizes to its colourful pinkish-red leaves, which are covered in a sticky-sweet substance.

Once the bug is trapped, the sundew’s digestive enzymes work to break it down, so the plant can use it for nutrients. It’s believed that sundews weren’t always killers, but that they evolved to survive. Since the highly acidic soil in which they live lacks nutrients, they adapted to kill insects. These small but mighty species have been traditionally used to treat lung ailments or applied topically to treat minor skin issues, like pimples.

Who knew such a tiny plant could play an important role in medicinal history.

The sundew also shares its home and prey with neighbouring Pitcher Plants, our second carnivorous plant here at Blue Lake.

The pitcher plant kills by luring bugs into its cup-like leaves.

Small insects are attracted to the musky smell of the plant’s juices. When they investigate, they fall into the small pool of digestive enzymes. The Pitcher Plant is impossible to escape due to tiny hairs pointed downwards inside the cup,  preventing bugs from gaining any traction. It is truly a fierce predator of the fen.

Though not a friend to flies, this plant was used to treat smallpox in the 1700s by Dr. Sarrazin of Quebec, saving many lives. Carl Linnaeus took into account Dr. Sarrazins hard work, selecting the Pitcher Plant’s scientific name Sarracenia purpurea as a nod to Dr. Sarrazin’s efforts.

Indian Pipe is often referred to as the ghost of the fen. This hauntingly white flower lacks chlorophyll, the pigments that makes plants green and assists them in getting energy from the sun.

To obtain the proper nutrients and minerals to survive, the Indian Pipe taps into the neighbouring symbiotic relationships of the tree and fungi. Both trees and fungi benefit each other; the fungi gives minerals to the tree and the tree gives sugars and carbohydrates to the fungi.

Indian Pipe, however, is the pirate of the fen. Its intercut root system steals from both trees and fungi, and doesn’t return the favour. This makes Indian Pipe’s relationships parasitic, as it only benefits the plant itself.

Though Indian Pipe is not the “friendliest” of the fen, it has been rather generous to humans. It’s unclear whether this plant is poisonous or not, but in the past, it was used as a sedative, a muscle relaxant, and treatment for eye infections.

This ghostly plant can be found thriving beside trees anywhere in the fen. Even in the most shaded spots, ’cause the sun’s got nothing on them!

Labrador Tea is arguably the most huggable shrub ever. Underneath, its folded underleaf is a soft layer of gorgeous rusty-orange colour fuzz.

Since this shrub is an evergreen, it peeks out of the snow during our long winters here at Blue Lake, and adds a little extra colour to the blindingly white canvas. In addition to the strong fragrance of its leaves, it is said that the crushed leaves repel bugs.

Labrador Tea, as its name suggests, has been used for generations by Indigenous peoples throughout Canada to make warm drinks. Taken as a tea, it is extremely useful for coughs and colds, and is also used as a kidney tonic.

This special plant is basically a cure-all, however don’t just head into the bush and start making tea! There are strict guidelines to follow when it comes to the dosage of Labrador Tea due to its potency and potential drug interactions.

This plentiful plant that dwells in our acidic soil here at the fen also is a tasty treat for deer during all seasons. What a versatile plant!

It’s fun learning about the traditional uses of these plants, but remember: picking plants in provincial parks is strictly prohibited. We encourage you to enjoy and to appreciate the beauty of these plants and gain the understanding of their important role in history without picking them for personal use.

The spruce fen is a special place that we hold dear to our hearts here at Blue Lake. It harbours a wide range of unique plant species that are otherwise unknown to the average camper.

Next time you take a stroll on our Spruce Fen Trail, we challenge you to take a closer look at the species that may go unnoticed at a first glance. Try and find some of these plants and to remind yourself of their traditional and medicinal roles.

Just remember: discoveries in nature are encouraged, but be sure to leave nature as you found it.