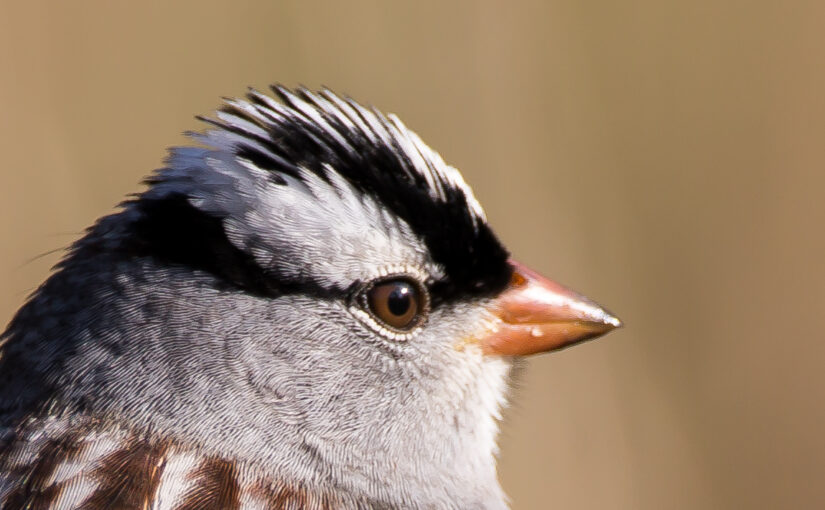 In today’s post, Rondeau Provincial Park Interpreter Shane Smits will take us through identifying just a few of the many sparrow species found in Ontario.

For several reasons, whether rightfully so or not, sparrows are often overlooked when it comes to birdwatching.

For starters, they tend to be plentiful. There are usually many sparrows seen hopping around near the forest floor or within dense cover.

But seemingly the most common reason to overlook sparrows amongst beginner bird watchers — that “all sparrows look the same” — is actually a misconception.

This is admittedly something that I have said on multiple occasions. Here’s why it’s wrong. Yes, all sparrows have their similarities. But after spending some time getting to know these little brown birds, their differences become more apparent. When identifying sparrows, there are several differences and field markings that you can use, but for the sake of keeping it simple, I like to focus on the head.

That’s because, to me, the head is the best way to identify and differentiate between many of our sparrows.

Which white is which?

These two species stand out in comparison to many of our other sparrows. But to the untrained eye, they could potentially be confused for each other.

These two have some obvious similarities with their black and white striped heads. However, the White-crowned Sparrow lacks the bright white throat, where the White-throated Sparrow gets its name.

The White-crowned Sparrow also lacks the yellow lores (the area in front of and above the eye) that the White-throated Sparrow dashingly sports.

Some other differences are in their beaks. The White-throated Sparrow shows a dark beak whereas the beak of the White-crowned Sparrow is pink!

Signs of a Song Sparrow

Next up we have the Song Sparrow (Melospiza melodia).

The Song Sparrow is one that I had difficulty identifying for the longest time.

In fact, I often relied on the song alone to either confirm or deny my identification. After taking some time to learn my sparrows, I haven’t needed to rely on the song for quite some time, although it is still a nice song to hear. Song Sparrows are quite common and often found in a wide variety of habitats.

They lack any bright coloured markings on the head, instead, their cap is a reddish-brown colour with a streak of gray down the center.

Another notable field marking I found to be helpful for identifying these sparrows is that same reddish-brown coloured streak that extends backwards from their eye.

Lastly, if the head alone is not enough to get a positive identification, look at the breast.

The breast of a Song Sparrow is streaked and often shows a darker spot directly in the center.

Chipping away at sparrow IDs

Finally, we have the Chipping Sparrow (Spizella passerina), one of my personal favorites.

This sparrow quickly became one of the more recognizable sparrows for me as it has features that really stand out. For starters, their cap is reddish in colour and stands out quite well.

Their face is a light grey colour which offers great contrast with the rest of their colours. On their faces, their dark beak leads into a black line through their eyes.

In addition, they have a whiteish-gray throat with little to no markings on their breasts or their sides.

Getting in the right head space

Through all my experiences identifying different sparrows, I can narrow my top tips down to these five:

Hopefully, some of these tips that I have picked up along the way will help you as well! If you are a beginner birder who has not yet mastered the identification of sparrows, stick with it, take your time, and pay close attention to these little brown birds next time you are out birding.

After some time and practice, you too will feel like an expert and appreciate the diversity that exists among these little birds.