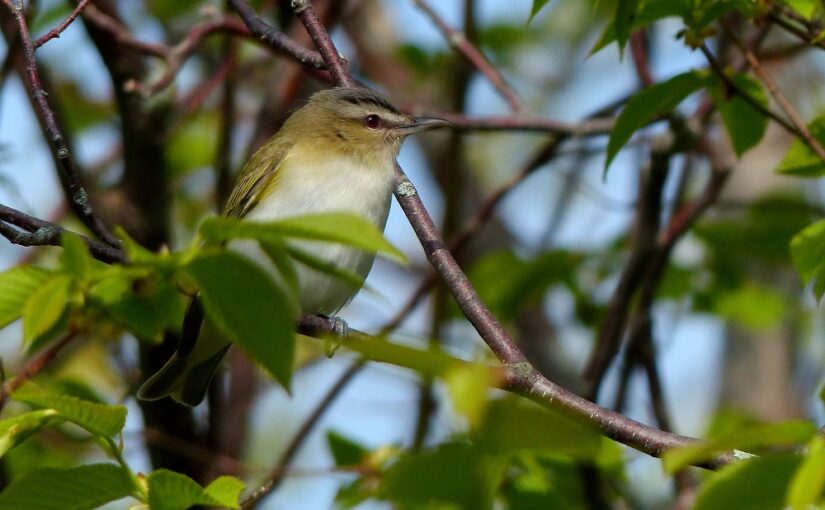 Today’s post comes from Habitat Stewardship Technician Justin Johnson from Pinery Provincial Park. Justin has a M.Sc. in biology with a focus on bird acoustics.

Birders are an interesting breed of people. Sometimes everything they do seems to subvert the norms of society.

Sleeping in? Rather not. Too much coffee? No such thing. $4500 binoculars? Yeah, I’ve seen it.

Birders’ bread and butter is local natural spaces and their trails. They can be very particular about which trails they walk. Seasoned birders often only use trails they perceive as “birdy,” neglecting those off their sacred path.

But how do we really know which trails are the “birdiest?”

If you asked a birder what the best birding trail at Pinery Provincial Park is, they’d say something like “I checked eBird and it’s Riverside Trail.” You should take caution in assuming that, though. Riverside Trail may be Pinery’s “picnic table,” a reference to a fabled picnic table in Patagonia, Arizona.

The Patagonia Picnic Table Effect posits that as a location becomes associated with rare bird species, more people are attracted to that spot. In turn, they find even more rare birds.

Though the effect itself has been discredited, it’s worth pointing out that as a location gains notoriety as “birdy,” more people will inevitably visit and see more birds.

Such is the case for Riverside Trail. Its impressive eBird checklist may be bloated by the sheer number of birders who walk it.

The issue becomes defining “birdiness” in an unbiased way.

I decided to make this my quest. Here, I present data collected with limited prejudice that suggests maybe we really didn’t know what the birdiest trail in Pinery is after all.

Uncovering the secrets of Pinery’s birdiest trail is part of a much larger project here at the park.

The Friends of Pinery Park’s Habitat Stewardship Program is dedicated to creating and maintaining habitat for species at risk.

Part of this initiative requires defining the range of species in the park. To do this is no small task. A single observer could never hope to adequately cover the entire park over the summer months.

However, the use of acoustic surveillance permits just that.

The Wildlife Acoustics SongMeter Mini allows me to listen to all the birds in the park in a very efficient way. Also called an autonomous recording unit (ARU), the SongMeter is essentially a rugged programmable microphone which can record sounds of birds, 24/7 if desired.

I have a total of eight ARUs at my disposal, and have been deploying them all over Pinery this summer. These ARUs are left in a single location for a week, recording the sounds of birds, and then are moved to another location.

Between moves, I can pull the acoustic data from the ARU and identify the birds by ear.

As unbiased as birding can be

No monitoring program is without bias.

In this case, acoustic surveillance doesn’t work well (or really, at all) for non-vocal species.

Hawks, herons, and many ducks are largely silent, and will not be detected by an ARU.

This examination also removes migrants from the equation. Our Habitat Stewardship Program is focused on understanding the birds that breed in the park, so ARUs were deployed after most migrating birds had left the area.

Essentially what we are comparing are vocal breeding birds only.

Although it may seem unfair, keep in mind that for most of the year the trails are not occupied by migrants.

The number of migrant species found at a given trail is likely connected to the number of breeding species. Good trails often just get better during migration! This limits the effect added migrants has on any one trail’s birdiness.

To determine the birdiest trail in the park, I first calculated the centroid, or the coordinates of the centre of each trail.

I determined which three ARU deployments were closest to this, and combined the list of birds from each to create a trail list.

I used a combination of three metrics to measure a trail’s birdiness:

I chose these metrics based on how I imagine birders would define birdiness.

Combined, they present the most efficient way of filling a checklist with some unusual and rare species. Birders who want to avoid “dipping,” or going without seeing a species altogether, would benefit from knowing where uncommon species are located.

Without further ado… here are the birdiest trails of Pinery!

Species at risk: a three-way TIE for first!

The Carolinian Trail has come out on top!

Appearing first across two of three metrics, it should be considered the birdiest trail of Pinery.

Heritage Trail finishes in second place, coming first in unique species and second in the other two.

Riverside Trail takes third place, given it is third in number of species and tied for first in species at risk, but failing to make the list of trails hosting unique species.

Pulled from eBird, these are the current values at the time of writing for “effort” for my top ranked trails:

Carolinian (and even Heritage) may not be getting the birding attention they deserve! Everyone knows Riverside is a wonderfully birdy trail, but Carolinian may house species that have been missed in the past.

Perhaps we haven’t seen these species because no one birds Carolinian, but we should!

From the transitional mixed savanna of the trail’s parking lot to the tulip tree-dominated Carolinian forest to Carolinian Pond — the diversity of habitat is what makes Carolinian Trail a uniquely birdy place.

As part of the Habitat Stewardship Program here at Pinery, it’s important that we recognize the value of habitat diversity for species at risk birds, like the Red-headed Woodpecker and Eastern Whip-poor-will, both of which can be found at Carolinian Trail.

Next time you’re visiting Pinery and looking for birds, sure, go to Riverside, but check out Carolinian and Heritage too!

The data shows there are birding discoveries waiting to be had on the trail less travelled.