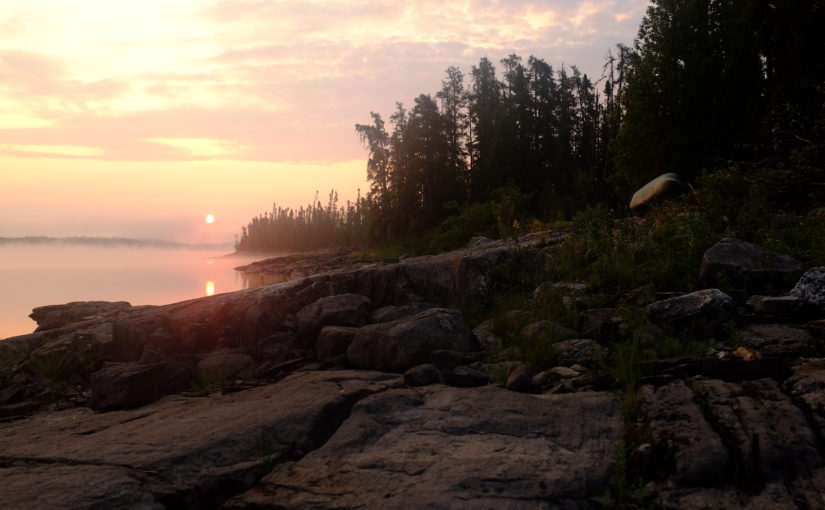 The rumble of car tires on gravel slowly fading into the distance is the glorious sound of freedom after many long hours on the road. Silence descends, and suddenly my wife Kim and I are alone and faced with the task of loading 24 days worth of food and gear into our canoe and setting off on Little Caribou Lake, across the threshold of Wabakimi Provincial Park.

The isolation is at once daunting and exciting; there are few places where the feeling is more intense than in the hinterlands of northwestern Ontario.

This is our third trip to Wabakimi, and by far our most ambitious. On previous ventures, we’ve arrived by chartered float plane and VIA Rail passenger train service, great options for those strapped for time or looking to experience the nostalgia of rail travel with a canoe. We opted for a vehicle shuttle by Wildwaters, based in Armstrong. The outfitter would store our vehicle and pick us up at another access point at the end of the trip. Road access to Wabakimi is extremely limited, but with the luxury of an extended trip, we had the option of cheaper, easy to plan vehicle shuttles.

At 8,920 km2 (3,440 mi2) Wabakimi is more than twice the size of Minnesota’s Boundary Waters Canoe Area. It’s a landscape of glacier-smoothed granite, carpeted in the pinhead spruce and leafy birch trees of the boreal forest.

Most importantly for canoeists, countless lakes and rivers radiate across Wabakimi like a watery circulatory system, draining north to the Arctic Ocean’s James Bay. You could spend a lifetime paddling here.

Within a day of setting off westbound at Little Caribou, we arrive at labyrinthine Smoothrock Lake. I love the challenge of relating landmarks to topographical maps; on big lakes like Smoothrock, I spend most of the time with one eye scanning the surroundings, the other identifying the various headlands and islands depicted on the map.

This is ancient canoe country, and it’s always fascinating to discover portages (which are not signed in Wabakimi) positioned in the most logical places. We camp our fourth night on McWade Lake, atop a polished headland that feels like it’s been a stopping place since the beginning of time.

It’s a thrill to slow down and become immersed in the deliberate rhythms of canoe travel; our pace seems to match the frequency of the land.

It’s mid-August, and the Flindt River at the western boundary of Wabakimi is running low. We’ve had plenty of portages to get here, hopscotching from Brennan Lake to the headwaters of the Flindt.

Drifting north, we anticipate many more carries as we journey downstream. Our tally will be well over 70 before the trip is done.

Wabakimi is large enough to allow ecosystem processes to function naturally without human intervention. Wildfire is a key part of the boreal ecosystem, and we witness the impacts of fire on the Flindt River, which bisects a major burn.

Between the charred trees springs lush vegetation, including colourful fireweed and tasty blueberries. It’s amazing to see how the fire danced across the landscape, razing some places and sparing others. On a more practical level, we’re pleased that the Ontario Parks’ First Nations-led backcountry maintenance crew has cleared the many short portages that punctuate our descent. After three days on the river, the Flindt feels like an old friend; we ride its flow into Tew Lake and veer east, into Wabakimi’s heartland.

Just as Wabakimi captures ecological integrity, it’s also defined by its watersheds. Ultimately, most of the park’s creeks and rivers flow into the Albany River, the liquid highway of Ontario’s far north.

At sprawling Wabakimi Lake, the Flindt joins the Ogoki River, which bisects the park’s core, capturing tributaries and gaining volume as it trundles east and north. Fortunately, we find one of Wabakimi Lake’s numerous campsites moments before an afternoon thunderstorm forces us to take shelter in the wind-whipped tent. Northwestern Ontario is infamous for its intense thunderstorms. Mostly they’re short-lived, but it’s critical for canoeists to monitor the afternoon skies and be prepared to get off the water a short notice.

Brief, powerful deluges occurred four times on our 24 day trip, enough to make me feel nervous at first glimpse of an anvil-shaped cloud.

There’s enough water in the wily Ogoki River for us to carefully run a half-dozen rapids on our way from Wabakimi to Kenoji and Oliver Lake. In such a remote setting it’s essential to carefully scout each rapid; after planning a route, Kim and I are constantly communicating in the canoe. Despite the powerful current, it’s a slow, deliberate process to safely paddle in moving water—and especially rewarding after a successful run.

The eastbound leg of our journey is our longest. Eventually, the Ogoki deposits us in Whitewater Lake, the biggest water of our route. From here, we continue downriver to trace the shallow, sandy shores of Whiteclay Lake. After nearly three weeks on the water, we feel prepared to tackle the most challenging part of our journey — a little-known, upstream route to the height of land on the Raymond River and across the watershed to Cliff Lake.

Things become ominous the moment we turn south: The Raymond River is nowhere to be found. We double back, examining the marshy shore for an outlet. Finally we discover a tiny, deep-water channel, which leads us into a broad muddy basin. We wonder about our decision to paddle this obscure corridor in clearly, a low-water season. But with each bend in the river, our apprehension fades. The Raymond narrows; soon we’re bushwhacking across ancient portages, our footprints mixing with the cloven tracks of moose, in this rarely visited wilderness at the height of land.

It’s apparent that few paddlers make it here today, but if you look closely, it’s clear this has been a paddling corridor for a long time. The First Nations legacy is pounded into the footpaths of the long and arduous portages; written in the blood-red pictographs of Cliff Lake; and captured in mysterious place names like Bad Medicine Lake. Just when we want time to stand still, our trip is coming to an end. For a moment, time stops at Cliff Lake. A jagged tear in the earth’s crust contains this stunning lake. We slowly cruise beneath its namesake shores, gazing at the myriad forms of pictographs.

We float silently and reverently. Before we head back to camp we leave a sprinkle of tobacco on the water as a token of thanksgiving for the rich opportunities a layover day affords in such a spectacular place.

I know we will follow this sacred offering as we paddle south; in two days time our adventure will be complete.

Conor Mihell is an award-winning environmental and adventure travel writer based in Sault Ste. Marie. Read his work in the Globe and Mail, Explore, Cottage Life, Canoe & Kayak, ON Nature, and other magazines and newspapers.

Wabakimi Provincial Park is one of three Ontario Parks that are part of the Northwest Wilderness Quest.